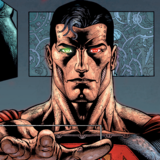 A strong gust of winter swept the streets of Jackson, and Thee Champion landed on the stone pavement of a school entrance. His scarlet cape flowed from his shoulders like a proud flag, and his eyes shot up to catch the school's name. The flow of air shifted, it's temperature rose by degrees too short for man to notice, but he - a god with senses fine-tuned for things man was never meant to know - had felt her presence long before she'd approached him. "Not everyday a Miracle Man swings by", she smiled, eyes like sapphires, and hair dark as her breath misted in the cold air. "Hopefully to enroll a child and not himself", the woman bantered, taken first by Thee Champion's gravity and then his smile. Where her smile was warm, his was polite, and felt thin - far away - like his humanity.

"A child", he answered, their eyes meeting. Taken by awe, she could've sworn his skin glowed like the Sun. "Specifically", Thee Champion strode, stopping a foot from her, "My daughter". She felt small before him, a small human in a small town from a small world. He was a god born from a random act of providence in the Sun. A savior. So it was only natural that there was a glint of satisfaction in her eye. She, a mortal, had the power - even if fleeting - to help a god by enrolling his daughter in her school.

She smiled, "Walk with me".

The windows of Villa Sol rattled and shook, and the Mazoi androids patrolling it's snowy borders bowed before the gale force that'd returned; Thee Champion. Walking into his ivory home, Alexis caught the thermal whisper of Tassiana and Star in the kitchen and smiled, truly. His daughter was his world and the Sun it revolved around. "When did you learn to make sandwiches?", he asked, powerful arms crossing over his chest, and smile warming at the sight of his daughter and Star. "I have news for you, baby. I've found a school for you to go to. You start next week so we'll start preparing tomorrow. The other news", he continued, "Is that your training will begin soon. But it won't just be daddy training you how to use your powers".

"Shira will be here to help train you how to fight. And be a warrior, like your mother, like Leo and like Cat. But I'll be there to oversee it". Striding to her side, Alexis ran his fingers through her hair and kissed her head as only fathers do. "Your brother told me what you said when you ran off to that library. That you want to protect us the way we do you. This training'll be about giving you the tools to do that and making sure you can protect yourself too. But", Alexis paused, "We'll still protect you, even if you were the world's greatest warrior, I'd still protect you, because I'll always be your father".

@lichter: Thank you! That's very high praise coming from one of the Vine's top three writers.

@lichter: Thank you! That's very high praise coming from one of the Vine's top three writers.

@ziccarra_liafador: She might just show up on her own!

@shanana: Nope! Just moving things along for an event I wanna create.

@lichter: Thank you! I'm looking forward to writing him :)