This is a moment we feared would someday happen. The adventures of Jonah Hex have come to an end. Jimmy Palmiotti and Justin Gray have carved out Jonah's history for over one hundred issues. With a lot of the New 52 launch titles having been canceled prior to this, it's a nice testament that this series lasted as long as it did.

Jonah's been through a lot lately. Some of the recent adventures have been a little on the zany side but they were still fun to read. Going back to Jonah's recent trip to his future (our present), he managed to discover some facts about the rest of his life. Knowing what your life is fated for isn't something a person can easily handle. But Jonah Hex has always handled things in his own way.

Tying into previous threads, there's been another person running around calling himself Jonah Hex. Jonah aims to confront the fellow. Along the way, he is joined by Tallulah Black. If that wasn't enough, Darwyn Cooke's art, along with Dave Stewart's colors, is simply amazing. You can easily see the connection between these two characters.

As Jonah's trip to his future and back has changed him a little, he now has the opportunity to simply leave his past life behind. With another person calling himself "Jonah Hex," he and Tallulah can ride off to the sunset. Of course, that just isn't Jonah's style. And you'll have to read the issue to find out what happens.

As for the ending itself, without giving away spoilers, it is a fitting one. I almost feel like there was a hidden meaning behind what we saw. The fact this series has to end and how long it's struggled to stay alive is reminiscent of Jonah's life. He's lived a wild life and we've seen some wild times in Palmiotti and Gray's run. In comics, we never truly see the end of characters. We'll just have to hope someday, somehow, Jonah Hex can return.

Obviously the fact that the series is ending is pretty bad.

It's the end of an era. Jimmy Palmiotti and Justin Gray have chronicled over one hundred issues with Jonah Hex. It's a sad day to see it all come to an end. Normally I have difficulty reading the final issue of certain series but I felt I owed it to the team and character to ride this final adventure with them. Joined by Darwyn Cooke and Dave Stewart, there is a visual feast to go along with this last story. There has been someone masquerading as Hex and Jonah has to decided if he'll do something about that. The ending may not be what some might want. I felt it was fitting considering how long the series has hovered on cancellation. It's been a fight to get this far and the Jonah Hex fans have stuck it out. This is our chance to bid farewell to Jonah. Hopefully someday we'll see his return. 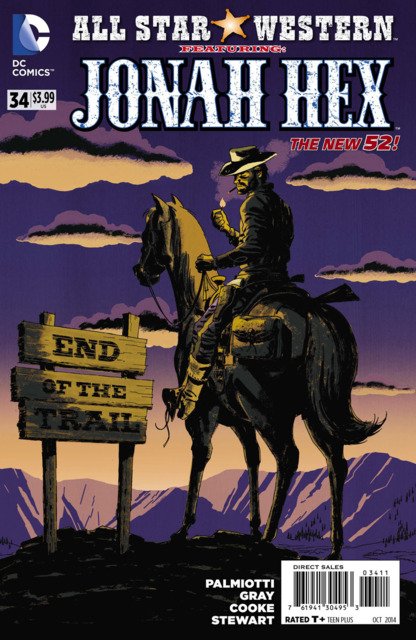