Batman is determined to bring Two-Face to justice, but the odds are stacked against him.

It's not often we see Batman out of his element. Scott Snyder and John Romita Jr. have put Batman on the ultimate road trip with Two-Face. Determined to complete his mission in taking Harvey Dent out of Gotham, Batman's rogues and countless civilians are gunning for Batman in order to claim the reward Two-Face is offering. We may be used to expecting the unexpected with Synder, but who would've thought we'd see Batman, Two-Face, and Duke Thomas trying to escape a crazed mob on a steamboat, headed towards a waterfall?

Romita excels when it comes to bombastic action scenes. With Danny Miki's inks and Dean White's colors, the different locations each have a separate feel. You get a sense of time passing throughout the day as Batman gets closer to his final destination.

As for what is waiting for Batman and Harvey, Snyder puts Batman in an interesting position. We get some answers and set up for future storylines. We get some satisfying closure on Harvey's situation. At the same time, you'll be looking forward to his next appearance without feeling like you're left hanging. Other developments were set up with Alfred's decision and actions. Despite seeing the relationship between he and Bruce established firmly over the years, Snyder manages to add another layer to it. You also have to applaud the situation with with the GCPD at Wayne Manor.

Looking back at this arc, Snyder and Romita have delivered an over-the-top and action-filled adventure. This isn't your typical Batman story, and that's a good thing. Snyder set up a lot, and Romita cut loose with each scene. I actually found myself going back and looking at each page, panel by panel. People have different opinions on Romita's art, but I find it fascinating looking over the different areas of detail contain within each panel. With the arc over, Snyder even ends things with a little levity. This is something we don't often see in a Batman comic. It's nice to see Snyder continues to mix up his approach to the character and keeps giving us something different than the previous Batman series he wrote for five years. 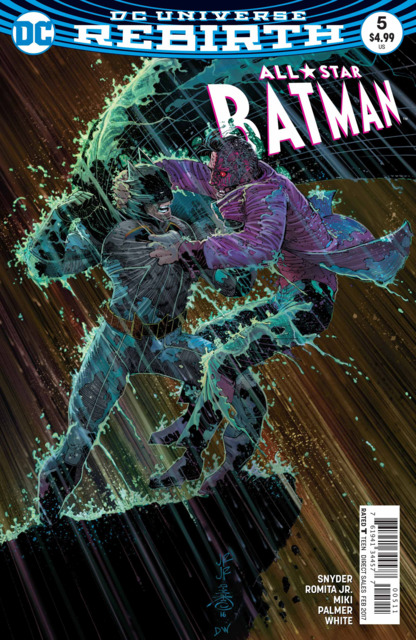