Superman is about to face a new threat from outside the Multiverse.

One of the fascinating things about the DC Universe is the concept of a Multiverse. We've seen many different versions of characters, and it's always interesting to see the different takes on certain concepts. With Superman, we've seen a pretty wide variety. Now, some of the different versions are crashing together as a new threat has targeted them.

Peter Tomasi and Patrick Gleason are kicking off the New Year with a high-octane new story arc. With all the recent Multiversity titles, it's felt like they've been ignored lately. Tomasi and Gleason are bringing back some of the characters, including the Justice League Incarnate led by President Superman of Earth-23. If that wasn't enough, who would've thought we'd actually see Superman meet Red Son Superman?

Ivan Reis and Joe Prado do their usual magic in the art department. There's a great classic look to Superman and the look of the new threat is pretty fearsome. Marcelo Maiolo's colors gives the classic look a modern feel with the color palette he uses.

The classic feel to the story felt a little out of place with the previous issues. Superman now is a family man. He has a wife and son. Of course he is the type of hero to drop everything for those in need. Rushing off to deal with a threat involving beings able to go outside the Multiverse without letting Lois and Jon know could cause them to worry. It's possible there just wasn't time to stop and contact them. Kenan Kong also felt a little different, but that could just be the result of artistic interpretation.

Tomasi and Gleason are heating things up with a bigger threat than we've seen lately. Bringing in the concepts of Grant Morrison's Multiversity is an intriguing move. With Ivan Reis, Joe Prado, and Marcelo Maiolo, we're in for a treat with the arc. Too often the beginning of a new story ends up being a little slow with all the set up. That isn't the case here. The story hits the ground running. You won't want to miss out on this. This arc has the makings of a definite must-read for Superman fans. 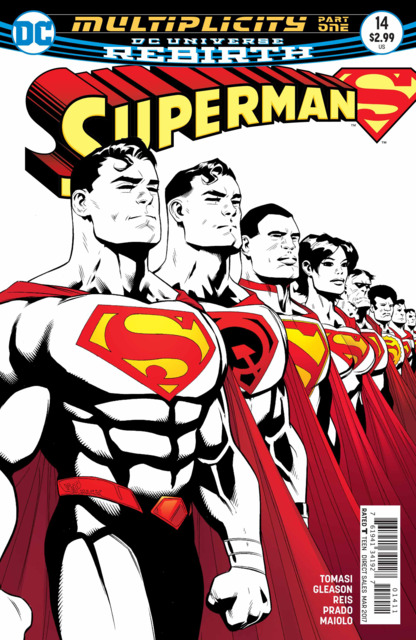