Jennifer Walters shows getting through the events of Civil War II isn't easy for everyone.

Jennifer Walters is going through some changes. Her character may not have been around as long as the Hulk, but she has had her share of adventures since her debut in 1980. In order to be seen as something other than just a female version of Hulk, we've seen her grow into a pretty different type of character. The differences in being able to control her transformation and retain her intellect gave her fascinating differences. Somewhere along the way, she became a character suited for more humorous situations. There were some enjoyable stories, but she soon started to feel more like a parody.

When it comes to big comic book events, we often see huge game-changing situations that quickly tend to fizzle out. The changes are sometimes looked at, but not always fully explored. With Jen, she's gone through quite an ordeal. She survived a beating by Thanos, which put her in a coma. She awoke to discover her cousin was killed. These served as plot points in the Civil War II arc, but it looks like Mariko Tamaki is going to take full advantage of these happenings in order to add some layers to Ms. Walters.

The issue opens with Jen headed to her old law firm as Jennifer Walters rather than She-Hulk. It's immediately seen she's going through some things. Trying to adjust to this new chapter in her life is wonderfully illustrated as we see Jen's commute from her apartment in New York City to the firm's new office. This isn't the usual happy-go-lucky character we're used to. When she meets with a seemingly normal client, we begin to see there's more to the story than there first appears to be.

Nico Leon's art and Matt Milla's colors are spot on. With the apprehension Jen is going through, you can practically feel her emotions oozing off the page. There's a nice subdued feel to each page and the colors really drive it all home.

As this is the first issue, there is some set up. The comic is called Hulk, but we don't actually see Jen hulk-out. For those expecting some rip-roaring Hulk action, there isn't any here. Instead, we see Jen's struggle to keep herself in check as she deals with the recent traumatic events. A first issue needs to set the tone for a series. It's hard to determine what we can expect in later issues here. Seeing Jen like this is an intriguing change and much preferred to the comic relief she somehow became over the years. I'm all for a look at the emotional side of surviving huge galactic threats over a simple punch-fest, month after month. With what Tamaki, Leon and Milla have shown us so far, my attention has been piqued. 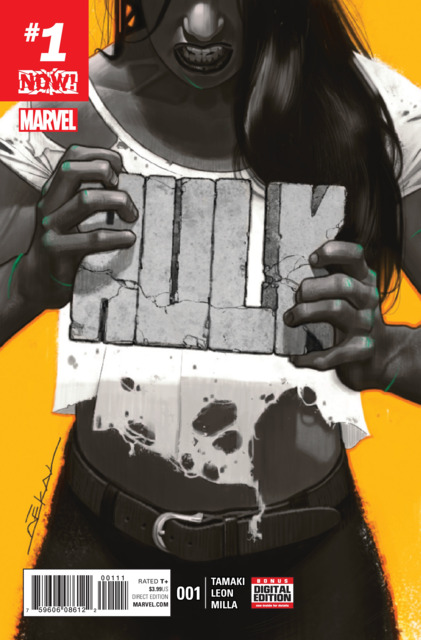