Writer Al Ewing does something this with issue that was incredibly necessary. He takes the time to re-establish who Loki is. Ewing's version of Loki really goes back to his "God of mischief" roots, which is fantastic. What's really cool is his attitude. Everything seems below Loki, like it's bugging him.

While he is a bit of a snob, this issue really focuses on Loki's role in this series. It nails home the idea that this isn't just a secondary character with his own book. He has a specific job to do, and in this particular issue, he has to start bringing home all the Asgardians who are living on Midgard.

The set-up for the story here is weird, but it really works. Loki tells a woman he's on a date with about the story of finding Lorelei and how he's supposed to bring her back to Asgard. Not only is the reader treated to a very interesting story, but it's presented to the reader in such a way that gets us into the head of Loki, hence broadening who he is.

Artist Lee Garbett and colorist Nolan Woodard hit a home run on this issue. For those who don't understand baseball terminology, they did some brilliant work. Their art really gives off that fun vibe that Ewing's writing does, all while being very grounded in reality. I can't decide if I enjoy the art of the writing more.

The difference between the tone of issues #1 and #2 is like night and day. Issue number one was a bit more serious, yet light-hearted, and story driven. This issue is comical and filled with jokes and weird little, breaking the 4th wall moments. Frankly, this issue reads more like DEADPOOL than it does LOKI.

The last issue of LOKI, the first issue, had this HUGE reveal at the end. This is something we never go back to in this issue, not once. It's utterly disappointing for those who really enjoyed the first issue and wanted to see where that reveal was going. Looks like we'll just have to wait until next month.

While the last issue was a 5/5 for me, this one gets a 4, even though I liked it more than the first issue. The problem is that the tone feels so different from that first issue and readers are missing out on what the last issue left us with. However, if this series keeps in tone with this issue, Ewing has a dynamite series on his hands. Try this book out. It's a lot of fun and has an extremely interesting concept. 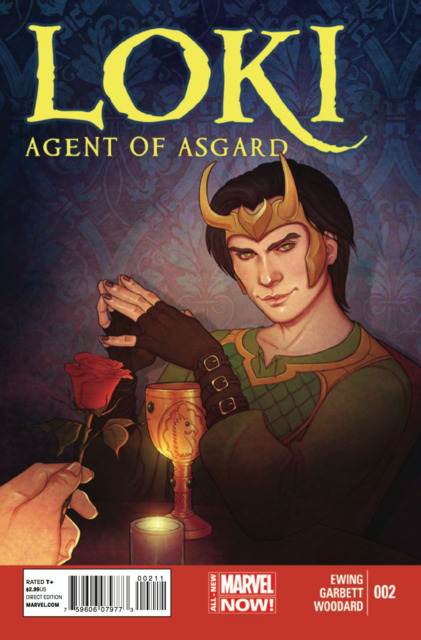