Grayson is on the hunt for Agent Zero.

Grayson hooks up with Tim Drake to learn more about the mysterious Agent Zero and tries to find a way to keep two steps ahead of her.

No other book at Marvel or DC is doing what GRAYSON is doing: delivering a spy book that has the look and feel of James Bond. That's right, GRAYSON feels like you're watching a James Bond film, but more in tone with the earlier films. It's not as dark and dreary as the Daniel Craig run. It's fresh with a whole bunch of familiarity. The character and book have really found their stride over the past few issues.

After the opening pages, where Grayson is searched for anything foreign on his body, he and The Tiger head off to a ship off the coast on Senegal to square off against Tiger Shark. We're treated to a pretty quick but pretty awesome fight scene right afterwards. As great as the fight is and as cool as it is to see the book open up like that, the best scenes happen afterwards.

Grayson has to talk to Red Robin about the identity of Agent Zero and Tim Seeley just nails the dialogue here with these two characters. The gabbing between them is so fitting for their characters and there's this brother-like relationship between the two of them that's apparent from the moment either of them speaks. In addition, we're getting some great detective work here, which Tim Drake is far superior at. As this scene moves forward, there are some great reveals about Agent Zero, which we won't spoil here, and it makes her more of a threat. The execution of these reveals, through dialogue, makes a scene featuring two men talking the most intriguing part of the issue.

What is there to say about Mikel Janin's art that hasn't already been said? He and inker Hugo Petrus and colorist Jeromy Cox are an incredible team deliver some of the best-looking art at the company. This creative team delivers a lot of movement within the action and packs some great emotion into the character's faces. There are also quite a few establishing shots in the issue that are simply beautiful. Art-wise, this book is simply stellar.

Overall, this book continues to be fantastic. It's highly under-rated and really reinvents Dick Grayson. Is it a bummer that he's not Nightwing anymore? Sure, but this new chapter in his life really sets him apart and makes him more than just an "ex-Robin." I highly recommend checking this issue and series out. 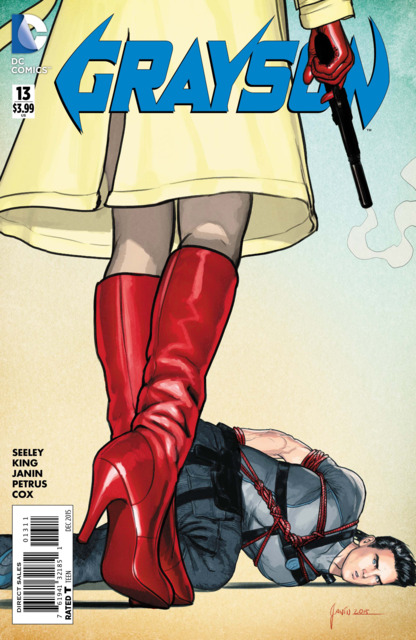