DC’s greatest mercenary is back in his own series. The question is, will he survive the first issue?

Deathstroke is back! As great of a character he is, it was unfortunate when his previous series had to end. Tony Daniel is taking the writing and artistic reigns in the hopes of delivering the series fans have been wanting.

From the opening pages, you get a feel for who Deathstroke is and how much respect Daniel must have for him. There’s an immediate sense of what he is capable of. Deathstroke is a mercenary. He will do whatever the job requires. Seeing him in, what we can assume, is just one of his many lairs, the little details of an inordinate number of weapons and masks is great to see. Deathstroke is a an of means. Instead of just throwing readers into a big and crazy mission (that comes in just a few pages), we get to see more of the operation side of Deathstroke’s business. It gives a little more humanity to what some may perceive as a monster. Seeing he requires some assistance in setting things up makes it feel more realistic.

Once the mission begins, it’s a blood-fest. While there is plenty of hacking and shooting, it’s not necessarily as gratuitous as we saw in the first issue. There is a fine line between showcasing violence and his abilities. We see plenty of dead bodies and even decapitated heads but it doesn’t feel like it’s done just for shock value.

One of the interesting twists (just wait, there’s a huge one later), is the fact that Deathstroke went on a mission in the past and it was wiped from his memory. This is something Daniel mentioned when we interviewed him at NYCC. This obviously opens up a new can of worms. For him, or readers, to not know what happened amps up our excitement. The end of the story will cause some confusion and most likely some anger. With this being the first issue, obviously we need to wait and see what’s going on before getting outraged.

Daniel’s art is great here. More and more, you can see the attention to little details and form he’s adding. Daniel doesn’t skimp on the backgrounds and seeing the changes in his outfit makes Deathstroke look fresh but absolutely familiar. You can tell Daniel is pouring himself into his work. I look forward to seeing his pencils more and more with each published work that comes out.

I mentioned one of the twists that’s bound to confuse many. It’s a cliffhanger ending. It’s something that will get people talking. We can assume there is obviously a bigger picture involved. I can't say I'm completely overjoyed with what appears to happen but I am definitely intrigued and hooked.

Deathstroke is back and is making up for lost time. Tony Daniel delivers a smart and violent first issue for the deadly mercenary. We see a little on how Deathstroke operates and gains intel on his missions. Once the action begins, it’s pretty much exactly what you’d want to see. Daniel gives us plenty of over the top action scenes with plenty of violence but it never feels too gratuitous. It’s not all action shots and blood as we learn there is something coming out of Deathstroke’s past he was unaware of. We also get a pretty crazy ending that will definitely make people’s attention perk up. It’s great having an action book with substance and plenty of detail. The hard part will be waiting for the next issue. 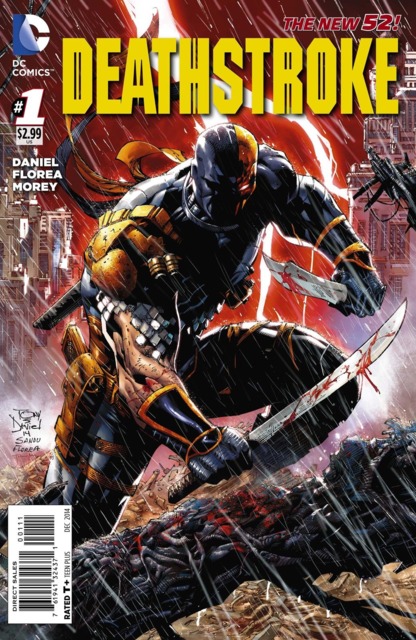