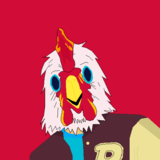 tis but mere chicken (just a republish of the bio, keep scrollin)

Cluck, as he is often referred to in regard to his usual headgear, has little on record in referring to who exactly he is. The only public knowledge on the individual stems from CCTV cameras and eyewitness reports. With the information provided from these, the only thing that can be entirely confirmed is that the chicken loves stealing. Truly.

An incident involving a heist in Vatican City is the event that brought the thief into the limelight. Eleven million dollars in art and religious artifacts stolen in a one-man robbery with over 40 casualties. Despite numerous investigations, every clue turned up fruitless, not even a fingerprint to be found. It was this event that marked the beginning of a string of robberies trailblazing across Europe from gas station cash registers to Swiss banks, no amount of money was safe in the year of heists. A number of private security companies took up contracts to protect their banking clients, yet each heist that came on the weekly news proved to be just as unpredictable as the last.

While the wealthy in Europe lost sleep, Cluck's actions inspired a cult following of individuals that flocked over every heist that occurred. Literal millions had been stolen by the time the year rounded to an end. To finish the epic chain of robberies across Europe, the Thief God and a band of five men hijacked a private plane belonging to an executive in Japan's pharmaceutical industry, from Tokyo to London in mid-flight. The details of how exactly the gang had managed to even board the flight is unknown still. However what is known is that the group aimed to steal a classified biological device from the flight. The defense system inside of the plane killed the Thief God's five accomplices and managed to eject him from the flight somewhere over Poland.

The year of heists never saw it's proper end. With the God of Thievery assumed dead in some Polish field, the media moved on and after a year of silence the crime wave was little more than a scar on the minds of the European upper class. Though rumors all across the planet of someone matching the description of the the Chicken Man have become more and more prominent, and yet another year of the rooster may begin again.

There is only one flagship power he possesses, a major key to his robberies and his namesake.

The Thief God displays a literal supernatural ability of stealing. The limits of this power are unknown currently, only that there's a surprising amount of things that one can steal. Countless pieces of footage show items directly across the room from Cluck appearing in his hand in just a blink, the same goes for snacks, weapons, valuables, even things a lot larger than him surprisingly. Shockingly, the limits of the ability do not seem to stop just at basic items. In the past, Cluck has stolen the position of people and objects, like a warped form of teleportation. And seemingly in another instance, stealing the form of objects, literally transforming into a liquid, on camera while a water cooler abruptly froze.

One of the most morbid seen of this ability so far has been an event in which two officers had actually managed to pepper the thief with the blast of a shotgun while only a few meters away directly in the stomach, blowing out his abdomen. However just a moment after the act, the chicken was fine and stumbling away in the next while one of the two officers had instead been the one without his abdomen now, the afflicted officer died in under a minute from his wounds and Cluck had escaped, reportedly fine during the next heist.

The only hypothesized theory by those that care enough to theorize is that the limit to this stealing ability seems to be sight, as in several occasions officers were only disarmed once the thief exposed his head enough to capture them in his line of sight. However, this theory is disputed.

Cluck's powers operate off of the idea that anythingcan be stolen. This includes things as simple as physical items, like a vase or a bullet in the air. Or in more a more morbid sense, Cluck makes up for the lack of a healing factor by swapping body parts and health conditions with just about anyone nearby. Bullet wounds can be removed from his body by trading them with the flesh of another, if he was poisoned, or acquired cancer, he could steal the health of another living being, thereby moving the effect onto them.

The placement of another object or being in the world is another thing that Cluck commonly steals. Stealing placements act as a form of teleportation, just as he can heal his wounds by swapping a wound with the untouched flesh of someone else, Cluck swaps his current position with an object of his choosing.

The Thief God's stealing ability also stretches to the point of being able to steal states of matter, turning himself into liquid, an invisible gaseous form, or right back to a solid if he chooses.

Arguably the most radical of things to steal, is the abilities of another. For some reason (balance and fairness), unlike everything else, this seems to have it's limitations. Everything he steals is temporary use for him, as soon as the ability is taken, a clock starts ticking. Over time, the ability deteriorates from him. As time goes on, the effect of the ability becomes far less potent until at some point, it's gone entirely. As for the process of stealing it, whomever the power is stolen from, must be actively using it for the chicken to steal it. Once it is has been taken, the person it has been taken from only seems to lose that ability for mere seconds before they can once again activate it like usual.

Sight is the key limit to the stealing ability. If Cluck isn't looking at what he wants to steal, he can't take it. Simple as that aside from one exception. If the chicken knows exactly what something looks like along with the surroundings it's currently in, it can still be taken, even from miles away.

Legendary Acrobat: The Thief God has put Olympic gymnasts to shame with his unbelievable maneuverability. Eyewitness reports would be simply unbelievable if footage proof didn't exist of the claims. The acts appear to be the kind of stunt that only a true professional could manage to pull off, especially in a stressful situation like a robbery. As well was being quick to maneuver, Cluck is quick on his feet and often able to outrun professional soldiers. His speed and overall cunning makes him a challenge to pursue.

Unlikely Combatant: One of the Chicken's greatest skills is the ability to effectively fight with nearly any object. The examples of this are boundless and surprisingly deadly. Although he seems lack any professional training when in combat, the amount of close quarters casualties are surprisingly high. Most attribute this to a mix of his erratic nature, luck, and reckless endangerment of himself. While not outright running into bullets, the thief god has, in the past, taken leaps out of windows or even stumble across highways simply to maintain the element of surprise all through a fight.

Stereotype Thief: Nobody can call themselves a thief unless they're able to perform their deeds without being seen, and the Rooster is certainly no different from that. Sometimes bank vaults had turned up empty during the year of heists, and other times entire buildings had been found with their occupants bound and gagged with everything of value missing. It's hard to calculate just how "stealthy" someone is, but it's widely accepted among investigators that the only reason a fair number of heists that Cluck performed only went loud because he chose for them to be loud.

Headcase: It's believed that the way the thief sometimes refers to himself in the third person, or even as we. Along with the fact that the thief's methods in robberies can wildly differ from once anotherrefers to the possibility of a multiple personality disorder. Though it's by no means confirmed, an even if it was, the full extent of the condition is unknown.

The Mask: Source of his other namesake, the mask is always a key ingredient in his fashion. Seemingly fireproof, stab resistant, bulletproof (at least to small arms fire), the mask seems more of a safety net than something just worn for humor's sake. With nobody having gotten close enough to analyze the mask, it's unknown what it consists of, whether it be body armor or an enchanted artifact. However it is believed that the mask has more than just protective features based on past engagements. An infrared sight is assumed to be a part of the mask somehow, judging on how he had reacted to being smoked out before. Along with this, some assume that the mask must hold some sort of hands-free communication device, based off of instances in which spontaneous transport arrived for the Thief God when he made no movement even close to his pockets in a pursuit.

As to why he chose a chicken mask for his usual profile is anyone's guess. Though that part is probably just personal preference.