Finally the Young Avengers are Here

I've never really been a fan of Young Avengers having never really read them, but after hearing that Loki would be joining them, as well as Kieron Gillen writing I thought I'd give it a try, and have been looking forward to reading it.

This issue is split into separate stories that introduce the characters, which includes former Young Avengers Wiccan, Hulkling, and Kate Bishop, and the new additions of Noh-Varr, Miss America, and Loki.

Although this issue wasn't quite as good as I expected it to be, it was still a very good issue, and an excellent start to the series, introducing the characters perfectly. I loved Gillen's work on Journey Into Mystery, which also featured Loki, so expected brilliant things from this series, but after seeing his terrible work on the new Iron Man series I was no longer sure how good this series would be. Although like I said earlier this issue wasn't perfect, I still think that this type of series suits Gillen's style of writing much more than Iron Man does. I loved that Gillen took the time to introduce all the characters as for people like me, who only know a little about them, it's a brilliant way to get fully introduced without jumping straight into a story. At the same time it's not quite Young Avengers yet, as not all of the characters are together yet, but I hope that happens next issue, as at the end of the day this needs to feel like a team series.

The art from Jamie McKelvie is amazing, and although I'm not familiar with any of his work, it really suits this series. The art has a cartoon feel towards it, but it's still got ton's of detail, and I feel that the look is perfect for this type of series,giving the fun vibe that's expected in a fun series. McKelvie also does a brilliant job of drawing people, and although it'snot the best art I've ever seen, it is still very good, and consistent, with all the panels having tremendous detail. He also draws the characters emotions, and expressions perfectly, as you can really feel the emotion throughout, and especially in the sequence featuring Wiccan, and Hulkling. Besides great detail McKelvie also draws some amazing action sequences, and I really think that his art will make this series phenomenal, and hope he stays on for a long time.

The story was a little over the place to introduce all the characters, but the issue starts with Kate Bishop wake up in Noh-Varr's house in space. I thought this was a brilliant sequence, as although we get to see Kate get involved in the series we also get to see some development in Noh-Varr's characteristics. I've been enjoying seeing Kate in the current Hawkeye series, and am happy to see her in this series, but it was whilst reading I became more interested in Noh-Varr. Although he's made many appearances over the last few years, mainly in Avengers series he has always been a bit mysterious, so to see some character development was nice. I especially liked how he was staying near earths he could continue listening to music.

The most interesting sequence in this issue however had to be the sequence featuring Wiccan, and Hulkling. As I said earlier I'm not overly familiar with the Young Avengers, or it's characters, and I was surprised to find out Wiccan, and Hulkling were lovers. Don't get me wrong I'm not against same sex relationships, and it wouldn't be the first time I've seen it in comics, but all the same it was still a surprise. Moving that aside, I felt that this was a very moving, and emotional sequence, as Wiccan was upset that Hulkling was out fighting crime, as apparently the former Young Avengers agreed to stop being super heroes. The thing that made this sequence emotional however was how Hulkling went on to talk about him not having parents, and that he fell in love with Wiccan because he was a super hero. It's hard to explain the actual emotion, but this showed that due to having no parents, that the only things Hulking cared about were Wiccan, and being a super hero.

The sequence I expected to be the best in this issue was the meeting between Loki, and Miss America. This was what was featured in Marvel NOW! Point One, and due to loving the mini sequence in that I expected it to be the best in this issue. It was however still a very good sequence, and the only reason it wasn't, was due to the emotion in the Wiccan/Hulkling sequence. As I said earlier, it was Loki's involvement in this series that got me interested in the first place, and after seeing him in this issue I wasn't disappointed. Gillen continued writing Loki as well as he did in JIM, but this time he added a bit of humor to him. I especially liked how how he described his brother Thor as being fond of his hammer. It will be interesting to see how Loki fits into this team, and I'm also interested to see if Thor will ever make an appearance, as Loki caused Thor quite a lot of grief last time we saw him. I'll also be looking forward to seeing some more development into the Miss America character, as besides her being extremely angry with Loki there wasn't much of it in this issue.

This was a very good issue, and I still have high hopes for this series. The issue itself was far from perfect, but it was a great start, and makes it easy for brand new readers to like this series. I would highly recommend this issue, and am extremely looking forward to the next issue.

This is probably the Marvel Now! Series I was most looking forward to I am a huge Young Avengers fan and they haven’t ever had an ongoing so when this was announced I couldn’t wait.PlotNoh Varr and Kate Bishop are in a spaceship but they are attacked by Skrulls soon after Kate wakes up. Hulkling disguises himself as Spider-man and takes out some thugs but he encounters Wiccan when he gets back to his house.ReviewThis was a really strong start to the series and it is well worth picking up and thi...

Disclaimer: I haven't read Young Avengers in a while so I'm going into this only knowing Hulking, Wiccan, and Loki. The other characters I don't recognize and I rather not look up because I think it will be interesting starting from a fresh impression and seeing them develop without prior background knowledge to fall on.So, that being said, I liked it. It was a good introduction to the characters and I'm rather excited about that :).The first characters you meet are Kate and Noh-varr. Basically ... 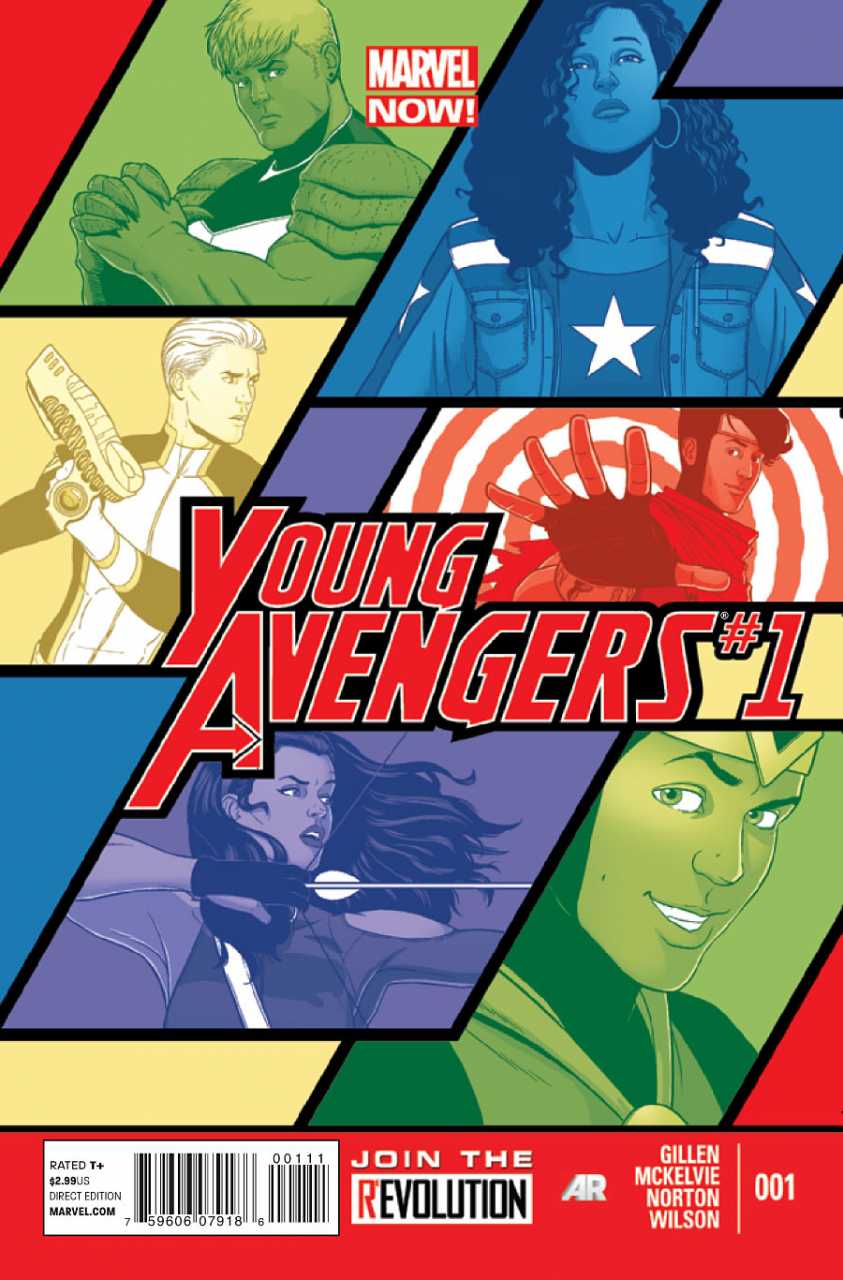 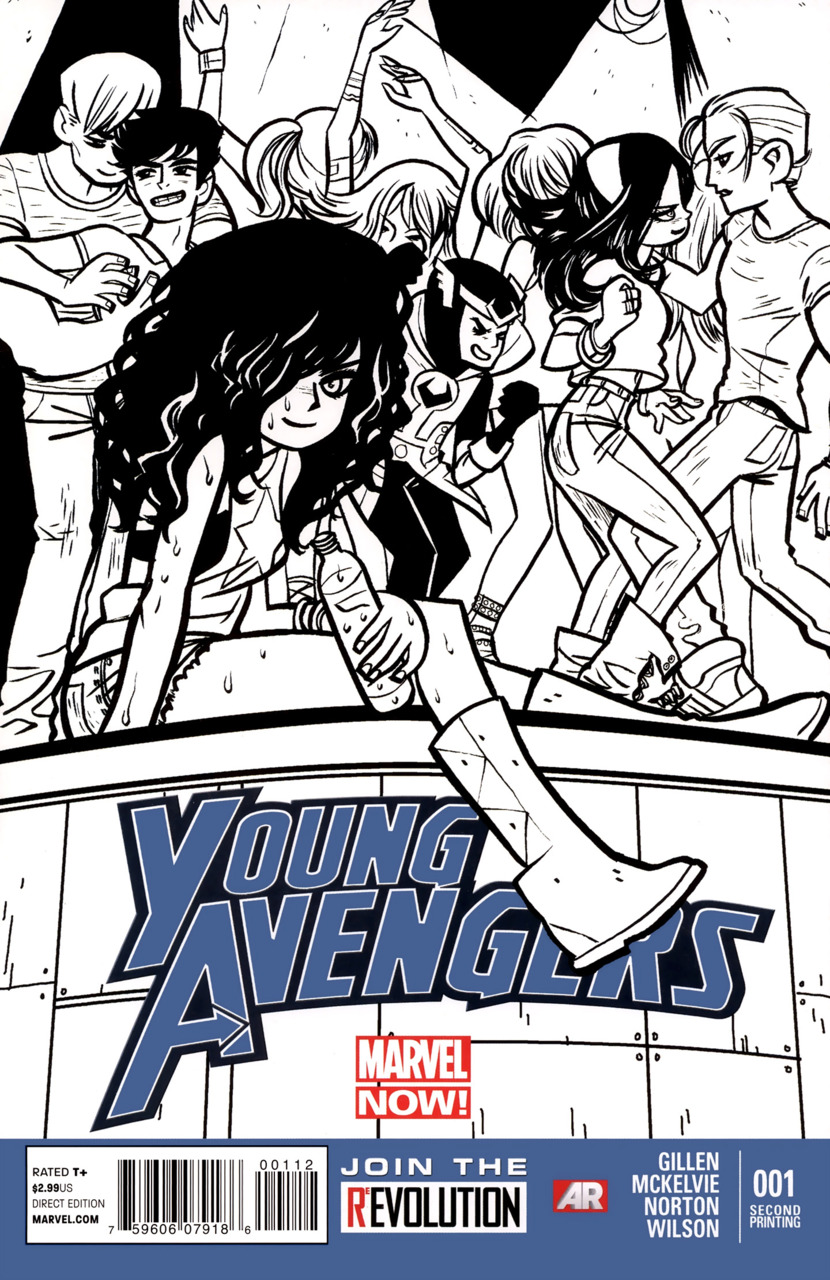 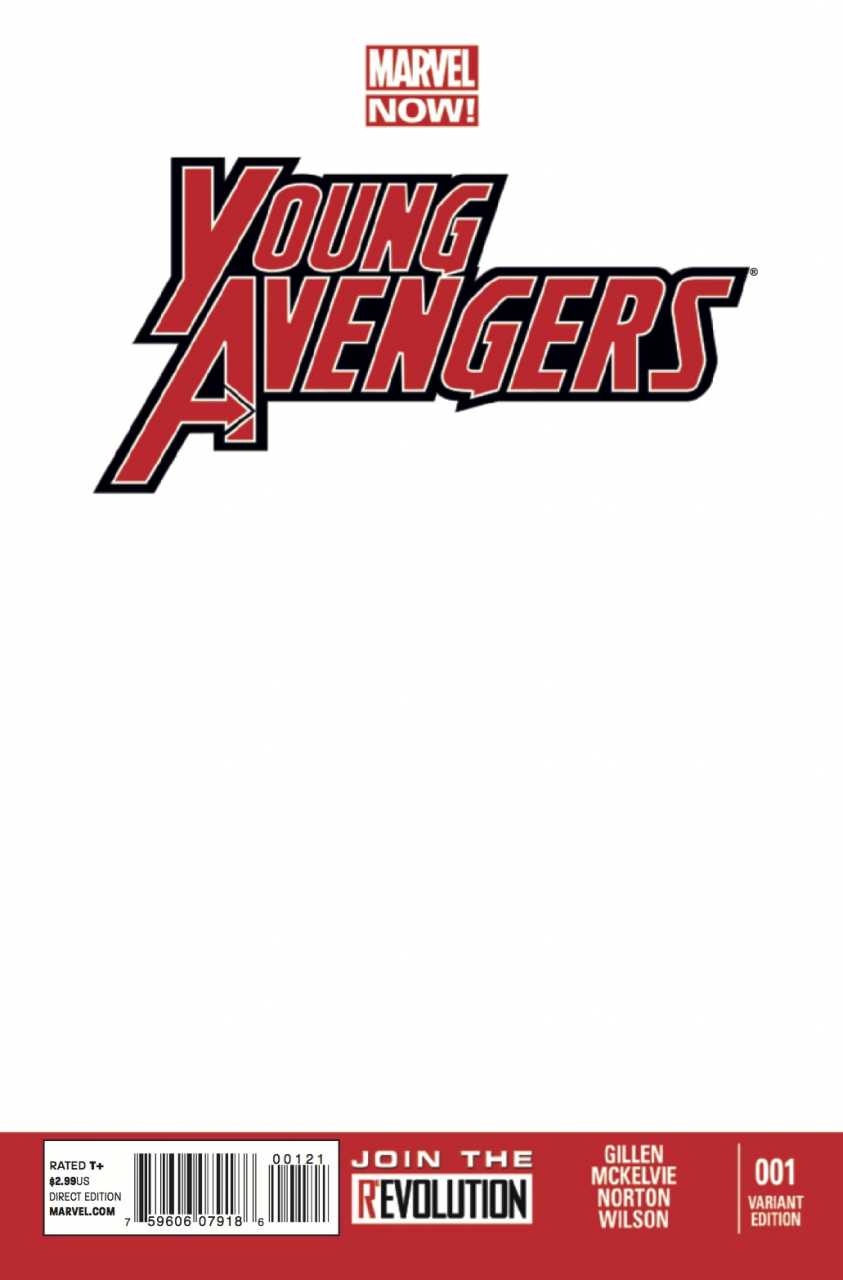 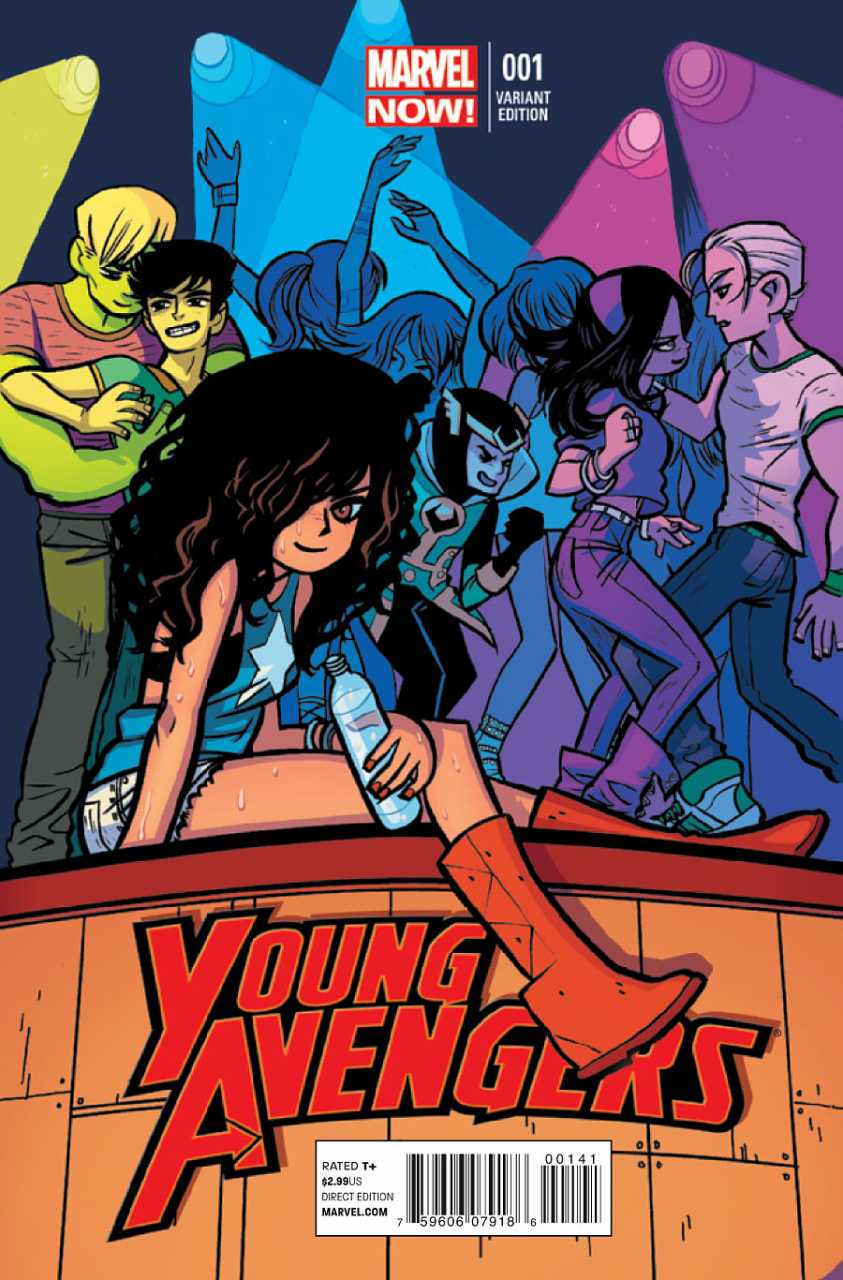 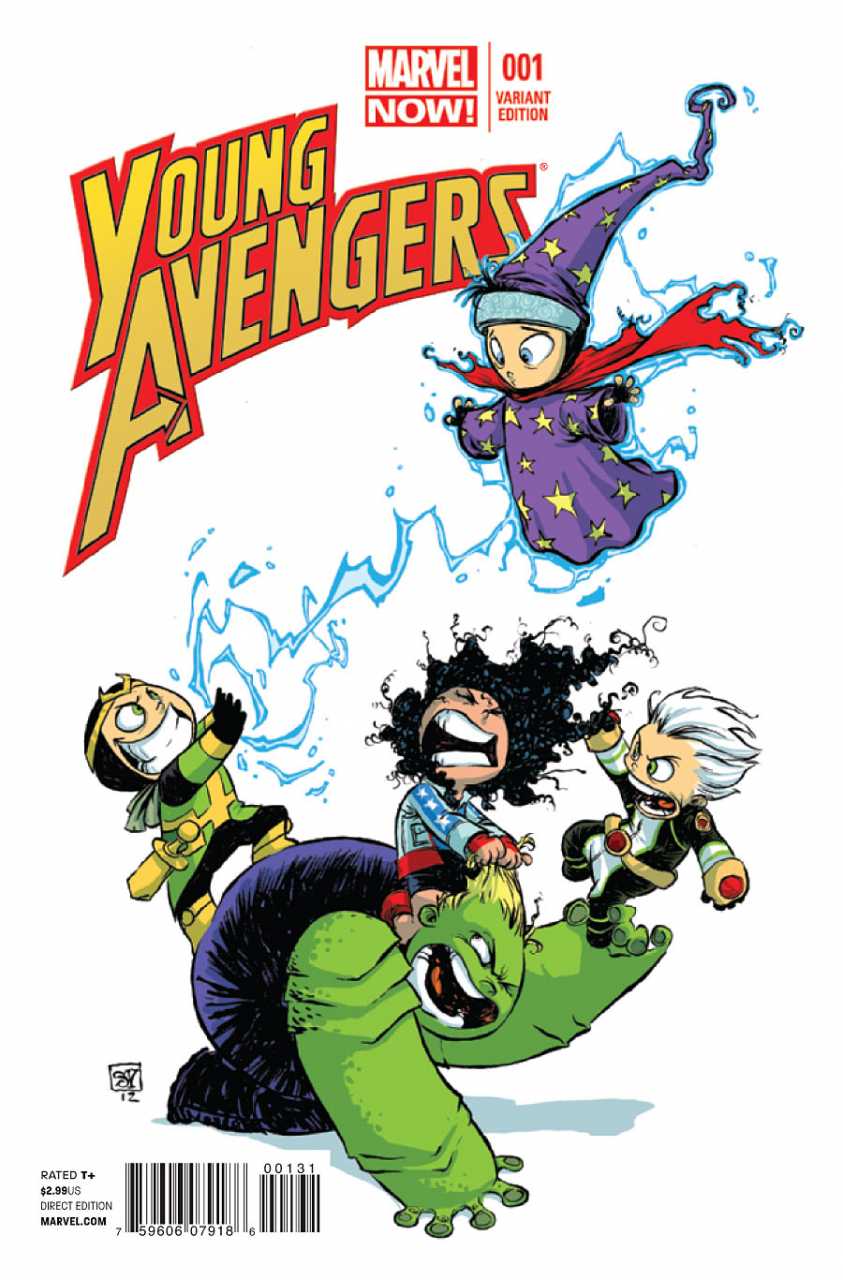