A satisfying conclusion to Magneto War

Summary
This issue has everything a good X-issue should – solid art, a battle featuring every member of the team, and a higher-level of ethical or geopolitical debate.

Story & Script
Davis and Nicieza turn in a strong effort with a brisk pace, but What really sets this issue apart is its respect for character and continuity. Everyone gets a moment, and many of the moments tie strongly to the history of the characters.

I love the quick, decisive action from Nightcrawler (good continuity to Gambit's jab at his leadership in Uncanny #366). Rogue is clearly emotional about grappling with Magneto, to Gambit's chagrin (recall that Rogue's dalliance with Mags was before she met Gambit).  Wolverine sustains an unrelenting rage towards Magneto (I believe this is their first encounter since the adamantium incident in X-Men #25?). Even the oft-neglected Marrow manages to snipe at Magneto for not coming to the aid of her Morlocks.

Having Trish Tilby recap the story so far on the nightly news is an effective convention, as is the Claremont-style exposition boxes across the first spread. As with the issues before this, the biggest complaint is the blatant deus es machina that is Astra. She teleports, she has unlimited alien technology, Xavier knows of her (though he's never met her) … oh, and let's imply that she's somehow related to Nightcrawler! It's all a bit much for a character who is a month old.

That it all wraps up with the X-writers finally doing something useful with Genosha and finding a way to keep Magneto around as something less than a madman is awesome.

There are a few minor goofs. Why is this writing team obsessed with toasters? Trish Tilby gives us the third toaster mention in four issues. Early-on the coloring team mess up Storm's costume, which has been purple in recent issues. Also, the hint that Astra could have been involved in Nightcrawler's origin is thankfully left un-revisited (though, in light of the later Draco War story arc in Uncanny, you could easily interpret that she is his sibling).

Artwork
Strong Davis/Farmer work throughout, with a solid set of colors. Davis doesn't draw Magneto too overly-muscled, which is a peeve of mine. Xavier and old-Joseph are great, Rogue is surer here than in recent issues, and I love his Dr. Alda Huxley. For better or worse, Astra looks a hell of a lot like Davis's take on Roma.

Bottom Line
A satisfying conclusion to the Magneto War, though it wasn't much of a war – more the X-Men ineffectually getting their asses kicked across North America while Magneto held the entire world hostage. Honestly, you could pick up this book alone rather than all of the proceeding issues.
Load Comments

Other reviews for X-Men #87 - No Surrender 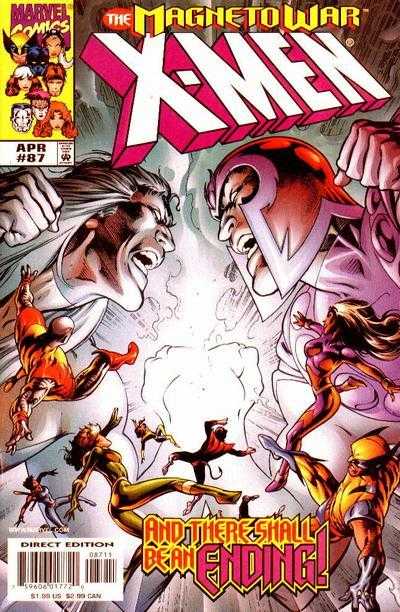