Worlds' Finest is a crappy comic. I hate it. I don't want to have to review it, but I'm doing it anyway because I said I would, but I'm tired, I feel like throwing up, and I do not feel like dressing up my disdain for this series in any sorts of fancy words. Crap is crap and this book sucks. Is this another issue that proves my hatred for Worlds' Finest to be fury well spent ,or is this one of those few issues that is actually okay and makes me question if this book has some potential?

To see this review with lots of image, Click Here.

In this issue, Huntress fights off an attacking force raiding Starr Island. We are also “treated” to a flashback of Helena getting her costume.

Given the fact I've been sick for the past few days, I considered rating all the comics this week based on how much they make me want to throw up, but that might not be a joke in this case. I let out a slew of vivid curses reading this issue, and I feel like slinging out some various body fluids too though it is possible that is a symptom of my illness rather than a symptom of reading Worlds' Finest, but I suspect it is probably the comic that is killing me.

Here's what happens in the whole comic. Stupid stuff, stuff that looks like it might be going somewhere but inevitably will not, and a cliffhanger for the next issue which will no doubt contain more of the same.

If God came to me and said I could send one person to Hell, and I knew who was most responsible for this atrocity of a comic book, then I would absolutely not send that creator to Hell because that would be horrible. I would probably choose a terrorist or something. Or whoever invented the term “swag.” However, if I could come face to face with the person most responsible for this travesty, I would tell him or her that I am not extremely fond of his or her work, and then they would cry, and I would feel guilty.

I...don't even...I don't even know how to review this series properly anymore. I apologize for the rambling nature of this revie. I'm sure a lot of it is because I'm feeling so bad, but the other part is that this is just too stupid for words, so I'm going to sum it up Bat Dropping style so that I can avoid having to be coherent and organized in my thoughts.

1. Starting with the cover, we have a classic, “This will never happen in the comic” spread. Not even close to happening in the comic. Nope, not even a little bit.

2. Karen Starr has hired the most useless security staff in the world.

3. I did like that Helena went into battle with a sling on her arm since she is still injured from last month. (though I thought she was shot in the chest, but I do not care near enough to check that) She looked pretty tough fighting despite her major injury.

4. Helena knocks a guy out by throwing a small brick even though he is wearing a helmet. That must be the worst helmet of all time.

5. Huntress takes a blast from a gun which can level large trees and stun Power Girl, yet Huntress is alive. Does writer Paul Levitz even try or does he just poop out the first thing that comes to mind?

6. Some random character shows up who we are apparently supposed to know and shoots a bad guy. Good for her, but...who is this woman?

7. In the midst of the fight scene, Levitz apparently felt things were on the verge of becoming exciting, so he decided to kill the vibe by flashing back to a completely irrelevant scene...44 months ago where we see Helena and Kara shopping. Yay?

9. There is so much potential here. We see Huntress getting her costume and crossbow, we see Kara dreading the meeting of Superman, we see Kara's plans to buy her island, and we see this costume designer lady. There are lots of things here which could theoretically build to a larger story, but you know what will happen with these plot elements? Nothing! Because that is exactly what has been made of the past eight, nine...however many torturous issues.

10. The art changes between past and present, and it is jarring as always.

11. Huntress rescues some girls. This has no relevance to anything. I'm guessing it is supposed to be a random girl power moment? Yay, rapists and pimps are bad!

13. Keeping up with the trend of making Huntress look useless, Power Girl once more saves her life when she gets in over her head.

14. Mr. Terrific might be back in the DCNU. Who cares?

15. If this is the real Mr. Terrific, why would he send commandos instead of just give Kara a call?

DC, I have no major attachment to Helena Wayne or Power Girl and I have no writing credentials of which to speak, but I swear to God I could write a better script in three hours than Levitz is giving you. Come on! What say you? I'll take a quarter what you pay him. Just give me a chance.

Other reviews for Worlds' Finest #9 - Raid

No Future, No Hope 0

What is the deal with the art team on this series? Ever since the first arc ended, there's been absolutely no rhyme or reason to the various changes, as artists come and go with approximately three different artists per issues. The only consistent art contributor has been George Perez, who always delivers a pretty stale and stiff style that I'm just not a fan of, this issue feels like he got lazy, as his entire potion looks messy in addition to everything else. Even CAFU's portion looks sub-par ... 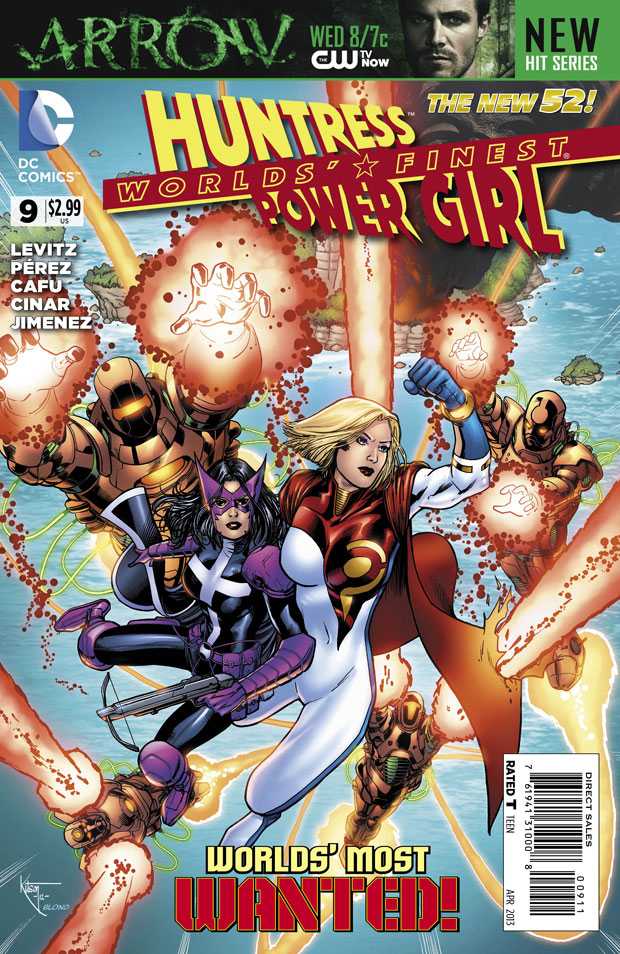