Going to be back in time

This issue acts as a turning point for the Wonder Woman series, one which was sort of unnecessary but also one which was not unworthy.  It shifts the focus from present day Wonder Woman on Earth 1 to golden age Wonder Woman on Earth 2.  The recent run of Wonder Woman issues (since the twelve labours of the JLA story arc) were actually decent silver age stories, but these upcoming ones are more throwbacks to the golden age, in a title which since the mod girl years hasn't really defined itself very well.  The World War II stories though were decent enough as well, so the radical departure both works and doesn't at the same time.  The premise behind it is basically that Wonder Woman is accidentally transported to Earth 2 and back 33 years by the new villain the Red Panzer.  Here she comes into conflict with the Wonder Woman of the time before they figure out what is happening.  When this happens modern Diana leaves and goes back to her own time (where her exploits will be shown in JLA issues for the time being) while the action focuses on golden age Wonder Woman.  The explanation of this was a little shaky (plus the difference in time between 1976 and 1943 is greater than 1976 and now) but it was clear they wanted to shift the focus.  The story was still decent as a lead-in to stories from this time frame.

Other reviews for Wonder Woman #228 - Retreat to Tomorrow! 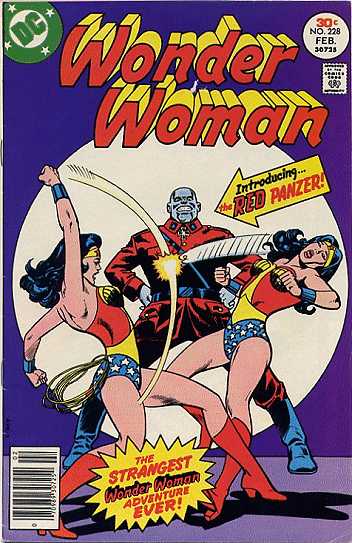