Intercepted by the Avengers

I originally wasn't going to get this series, hence the reason I'm reviewing it so late. I did however decide to get it as it had decent reviews, but the main reason was the upcoming Battle of the Atom crossover which features this.

When the Avengers intercept Cyclops's X-Men whilst visiting Tempus' mother, a heated debate about who is in the right embroils, and it becomes apparent that someone is a traitor.

This was a fantastic issue, but it wasn't exactly what I was expecting. Brian Michael Bendis is definitely doing a good job with this series, making it very different from his other X-Men title, All-New X-Men, but I have to say that so far although it's been good, it's still to really find it's feet, with the issues so far being very poorly paced, as well as not having any clear path to go in the future of the series. This issue has however continued to show that although slightly inconsistent when it comes to the overall quality, that Bendis can add lots of drama, making this issue which was slightly disappointing much better. The dialogue in this issue was also superb, as it really livened the issue up during certain sequences, whilst also showing humour in others, which yet again added drama, and kept me as a reader hooked. The emotion that Bendis put into this issue was also amazing, as you could see the passion, and resolve that certain character's had, which was brilliant. It did however lack the action that I was expecting given the way the last issue ended, as although all the drama, and emotion was brilliant, I was hoping for much more action.

The art from Chris Bachalo was once again decent, and although it will never win me over to becoming a fan of his, it does suit this series. There wasn't as many flaws to Bachalo's art during this issue, as most character's were drawn from the right angle, and mainly in uniform. I did however still find the way he drew Cyclops out of costume to be a bit awkward, but it was a big improvement over how he looked last issue, even when out of uniform. I also loved how second, and third page in he had a very bold image, showing the Avengers, and Cyclops' X-Men squaring of, with the character's closest to the edge being larger, but slightly out of frame, and the character's near the middle being smaller, but clearer. This double page panel really added a lot of drama, and suspense, making the opening of the issue that much more amazing, and awe-inspiring. The rest of Bachalo's layouts were also brilliant, once again adding more depth, and drama to the issue, which is something I always love from an artist. Bachalo's colours were once again phenomenal, and although that double page came close to being the best thing about his art, I still feel that it's his colours that are. They add so much life to the series, being very vibrant. They also add the perfect mood, and tone for this series, and although I may never fully love his art, I will probably always love his colouring.

This issue started showing Tempus prior to becoming a mutant in her former school talking about her hero, Captain America. This had to be a brilliant way to start the issue, especially given the fact that her hero ended last issue with the Avengers right in front of her doorstep. Besides this the small sequence was very dramatic, and emotional, with this girl who appears to be confident, although with not the best memory talking about her hero, and why her reason for liking him is much different from anyone else's. I also loved how this page was all in grey tone, with the small panel of Tempus in the present showing her reaction to the arrival of Cap at the bottom, which added more tone to the sequence.

The thing I was most looking forward to in this issue was seeing the Avengers square of against Cyclops' X-Men. Unfortunately we never really got a proper fight, as most of this encounter was dialogue, with both parties showing there feelings on the subject of Professor X's death. Due to that, this sequence which was very poor otherwise actually became very interesting, and dramatic, and although it was nowhere near as exciting as I'd initially hoped for, it was still very interesting, and gripping, having me hooked to each word, as well as the anticipation of what may come next. I also loved how there was an obvious atmosphere during this sequence, and that although they were both enemies, there were still certain members of each team that hoped for a peaceful outcome, showing that despite everything that's happened that they're still friends.

We also got to see more of Tempus, and her powers during this issue. Now although we got to see her use her powers during issue 1, I never quite noticed how useful, and effective they were until now, as although I initially thought that they weren't the best powers you could get (which I still overall feel) they are much more useful than they originally looked to be. I also found it kind of ironic that the reasons she liked Cap was due to the way he's handled coming out of the ice, and being trapped in time, whereas now her mutant ability is to trap people in time. Now I know this would probably have been intentional, but I still found it coincidental, as if that wasn't case he must have put two, and two together quickly.

Due to all the events that happened during this issue, with the Avengers knowing exactly where to find Cyclops' X-Men, it is needless to say that they realised there had to be a traitor in their team. Now I won't reveal whether they found out who this traitor was, or if they argued amongst themselves, or whether it was something else as that would be spoiling. I will however as usual say my feelings on this development. This was brilliant, and I just loved the rising furry on Cyclops' face, as ever since it was revealed that Magneto betrayed them at the end of issue 1, I was really looking forward to seeing the rest of Cyclops' X-Men's reaction to this betrayal, even if they didn't know who it was (not saying whether they do or don't). I also found this entire development to be very exciting, and dramatic, and although the excitement didn't fully make up for the lack of action, it didn't hurt, and did make a difference to the issue as a whole.

This was a very good issue, and although there were parts that were disappointing, it was still very dramatic, and gripping, with brilliant dialogue, and emotion. It was also nice to see some of the issue centre around one of the students, Tempest, as with all these big name's it's easy to not spend enough time developing new character's. I would recommend this issue, as despite the series not quite finding it's direction heading into the future, it has been interesting, and still shows ton's of promise.

WARNING THERE BE SPOILERS!!!Well, if anyone who watches me knows, I don't read Marvel. I occasionally get a book from my shop as a gift or to try something new, and I have read the New Avengers issue 2 and couldn't stand it. As a DC guy I was hell bent to not compromise to the enemy that is Marvel, that is until I realized something. A different take or something new is always good, and why not try and mix it up with the companies, try out something that catches your eye. That is what I did, and...

View scans here! The goodHigh profile- Can I just say how Cyclops is literally rocking the hell out of being public enemy #1 with the use of all the new technology on the streets. This issue we have him give an impassioned speech in front of a great many viewers which will no doubt end up on youtube and the news making him even more of a hero to all those with mutant pride. Sure wolverine has the quite school like pristine at Jean Grey’s but those who are looking to change the world will no doub... 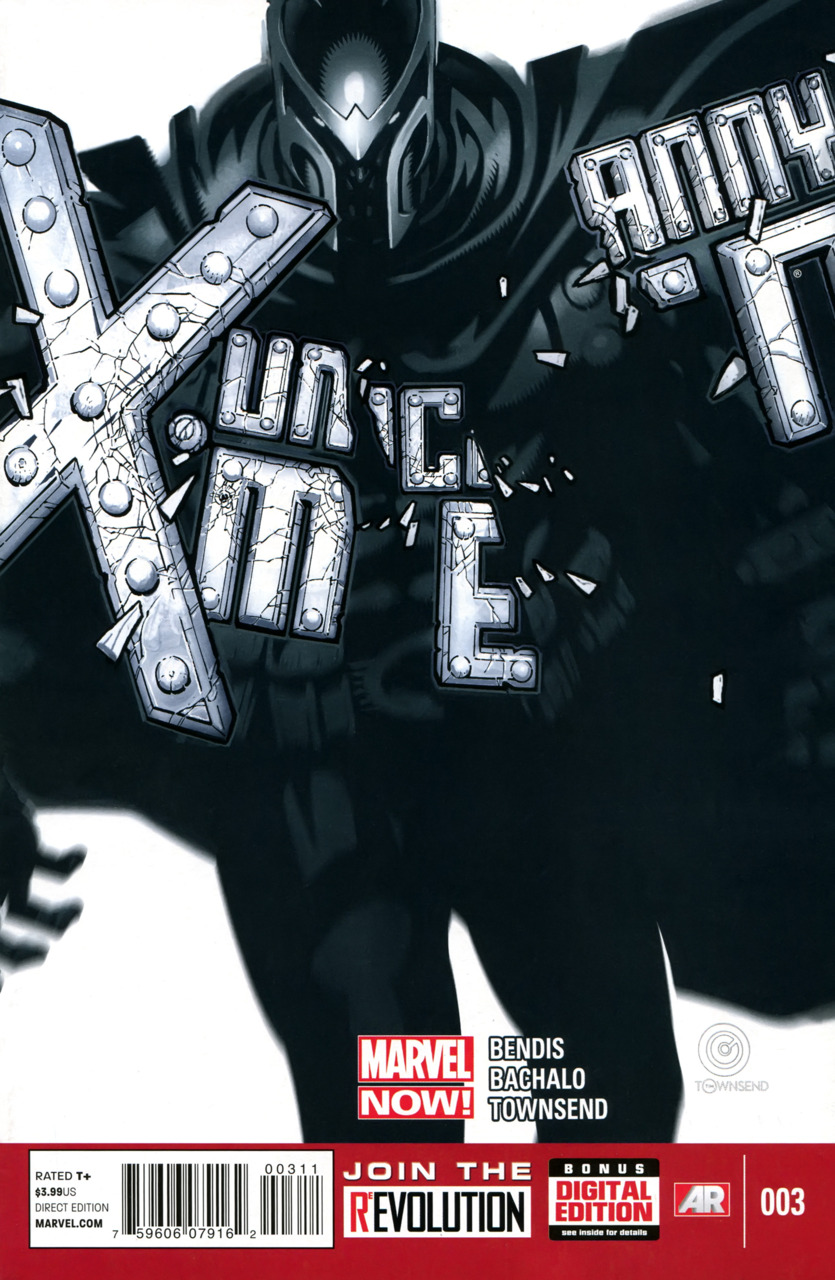 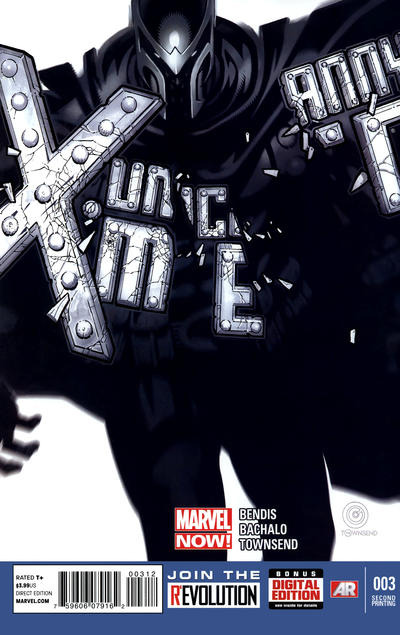 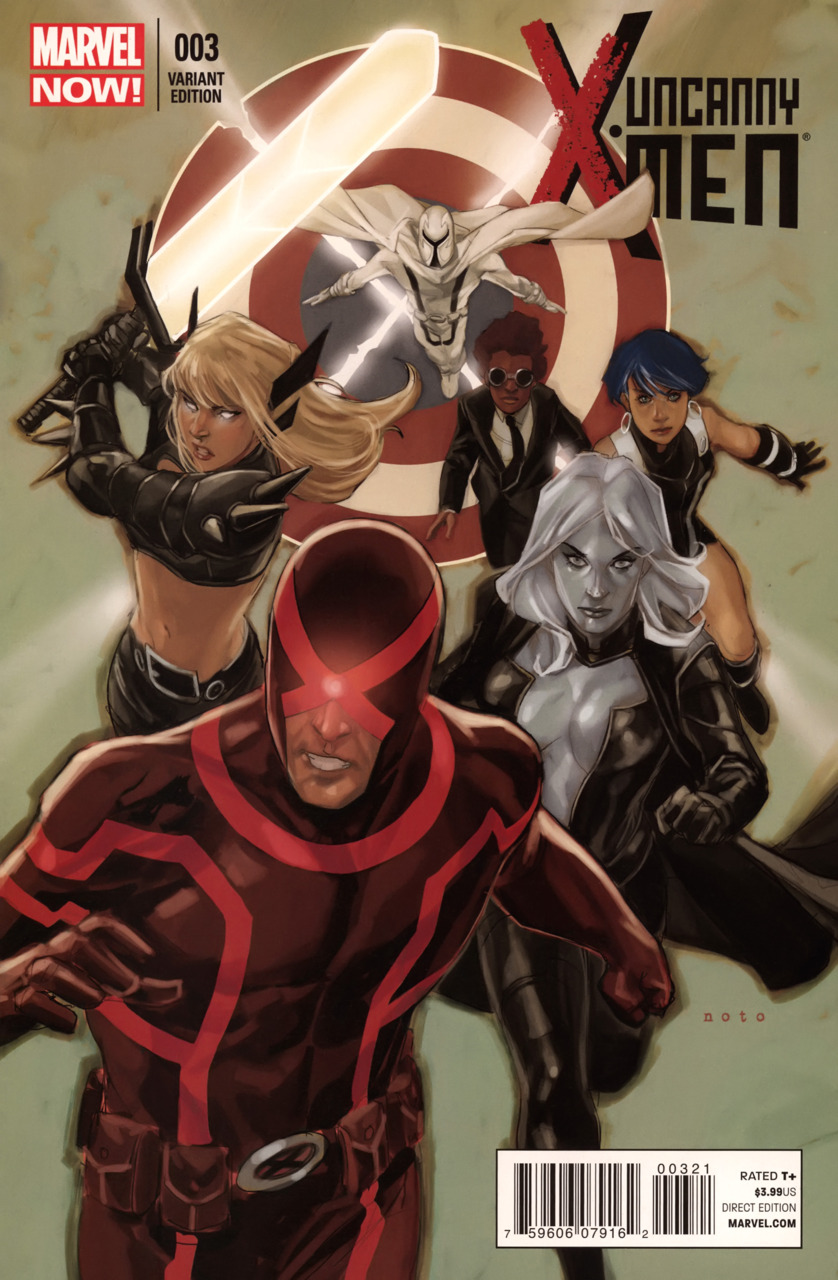