I've recently decided to go back and review the issues in this series that I haven't reviewed, having re-read them, but my reviews will be written as if I've not read the issues that follow them.

Although the first story had a few bumps along the way, it was overall very interesting, and after another read through, it was much more enjoyable, as the scheduling damaged the series to a certain extent. Now with new members joining the Avengers Unity Squad it looks like the series will become bigger and better, and the perfect cross between the Avengers and X-Men.

The Apocalypse Twins are born, but before they get a chance to be the caretakers they were meant to be Kang takes them away. Also Wonder Man and Wasp join the Avengers Unity Squad to help with the P.R., and Wolverine travels to Japan to recruit Sunfire.

This was a fantastic issue, and although it wasn't as exciting as the series has been so far, it's still a better issue, as it's much more interesting, and the introduction of new characters is brilliant. I've really been enjoying what Rick Remender's been doing with this series, and although the series was hindered by shipping schedule it shouldn't be any longer, and we should get stories that flow much smoother, without readers having to re-read previous issues to refresh their memories. As I said this wasn't the most exciting issue I've ever read, whether Avengers or otherwise, and that's what's lowered the overall score, but it's made up for that with the interesting additions, as well as the dramatic dialogue, making it still better than the issues preceding it. I also really enjoyed that Remender took a bit of time at the start to show us where the series was heading next, as although there was a reference to the Apocalypse Twins at the end of the last issue, this issue makes it much more clearer, without giving too much away, but I'll talk more on that later in my review. Remender has also continued to do a marvellous job with the narration, and although there isn't as much of it in this issue, as there's been in the previous, he's still used it to the best advantage, and it continues to add depth to the story.

This issue saw a different artist for the first time in the series, as Olivier Coipel stood in as guest artist. Coipel didn't half do a good job, and although I loved John Cassaday's art in the previous issues, I still prefer Coipel's overall, and his style suits this style much more, as he's better at drawing character's in general, whereas Cassaday's better with action sequences (although Coipel's still amazing at that as well). Anyway although I will miss Cassaday's art, the delay in the shipping schedule was hurting the series, and I'd rather an artist just as talented that can do it on schedule would continue from him, but I will still be able to enjoy Cassaday's amazing covers, as he's continuing to draw them. Although Coiple isn't my all time favourite artist, he's still amazing, and I've enjoyed his art, especially on Thor, Siege, House of M, and when he returned to drawing Thor in The Mighty Thor, as his art is truly wonderful, and when I heard that he'd be working on this issue I was truly ecstatic. The detail in Coipel's art is brilliant, as everything looks perfect, and although there is the odd imperfection, it doesn't take away from the rest of his amazing artwork. I did however find the way Coipel drew Rogue's hair to be a bit weird, as although it looked messy, like Rogue's hair's meant to be, it also looked slightly unrealistic. Besides that Coipel's art was nothing short of phenomenal, and I'd gladly see him return to the series again, whether for a one off issue, or a more permanent basis.

This issue started with the birth of the Apocalypse Twins, followed by Kang taking them away with him. This was a very short sequence, but still very interesting. With the next big story arc being revolved around the Apocalypse Twins, continuing from Remenders The Dark Angel Saga story arc that he wrote whilst working on Uncanny X-Force, it was appropriate to have a teaser sequence for it. I did however also like that it was short, as it didn't take too much away from this issue itself, which is dealing more with the addition of new members, and how this Unity Squad's going to look in the eyes of the public. It was however still very interesting, as having loved the Dark Angel Saga, and anything Remender's written that has an Apocalypse theme, as well as the fact that Kang will be a part of the series has me very excited, and intrigued.

As I said this issue featured the arrival of new members to the Avengers Unity Squad, and the ones I was most happy to see were Wasp, and Wonder Man. With these two being classic Avengers it was nice to see them back at the Avengers Mansion, let alone on an Avengers team. With the return of Wasp to the Marvel Universe in the Avengers End Times story, as well as Wonder Man's involvement in bringing her back really excited me, as I was upset when she supposedly died in Secret Invasion. I also really liked the two as members during the start of The Mighty Avengers series. Anyway, I loved how they were introduced to sort out the Avengers P.R., as it gives a perfect way of introducing them to a team, and what team needs better P.R. than this one. Although Wonder Man says that he's no longer fighting I'm sure this won't last, and I can't wait till they show themselves as the true Avengers they are.

There was also a sequence following this with a confrontation between Wasp, and Rogue, as Wasp didn't like her changing the classic Avengers portrait of the original team for a portrait of Professor X. This was a very dramatic sequence, as the clash in personalities was brilliant. What I liked most was how Havok handled this, and he did a brilliant job of defusing the situation. Last issue showed that he could be the team leader during battle, this showed that he had the ability to control his team inside the Mansion, also showing that he could easily think of compromises. Overall this issue showed the type of person Havok is, and I'm sure he will be a great leader for the Avengers Unity Squad, especially considering he doesn't mind overruling Captain America.

Wasp and Wonder Man weren't the only two new members in this issue, as Wolverine travelled to Japan to find Sunfire. Now although I know who Sunfire is I don't know as much about him as I do about other former, or current X-Men members. The sequence with Wolverine recruiting him however was very interesting, and it showed both the reluctance of Sunfire wanting to be part of a team as well as the type of character he is. It also revealed one of the few things I knew about Sunfire, and that was the fact that he was a former Horseman of Apocalypse. This makes the addition of him to the Avengers Unity Squad even more interesting, as with an Apocalypse themed story coming up this team will feature two former Horsemen (Wolverine was also a Horseman of Apocalypse in the past), it should make the connection very interesting.

The ending was also very interesting, and shocking, and although I won't give any details as to avoid spoilers, I will say that it has me very interested in seeing how this develops.

This was a very interesting issue, and with new additions this series looks like it's going to become amazing. This issue however the best one at the time was still not perfect, as it lacked the amount of excitement that great stories have, but it was still very interesting, with dramatic moments. Coipel's guest artwork was also amazing, and it alone is reason enough to get this issue, but besides that the issue was brilliant anyway. I would highly recommend this issue, as although it was a quieter issue that isn't a bad thing, and the future of the series looks to be very promising.

Other reviews for Uncanny Avengers #5 - Let The Good Times Roll

I think it is true that every series Olivier Coipel jumps on to for an issue rapidly improves in quality! 0

I have been really enjoying this series since it launched yes even with the awkward shipping schedule and I have had to re-read the issues again to check up on the details of the stories but still once read properly it is a very good read and it was a great way to start the book off even if some people don’t agree and I couldn’t wait to see what happened next (especially with last issues ending).PlotThe Apocalypse twins are born in Akkaba City under the North Pole and are taken to be looked aft... 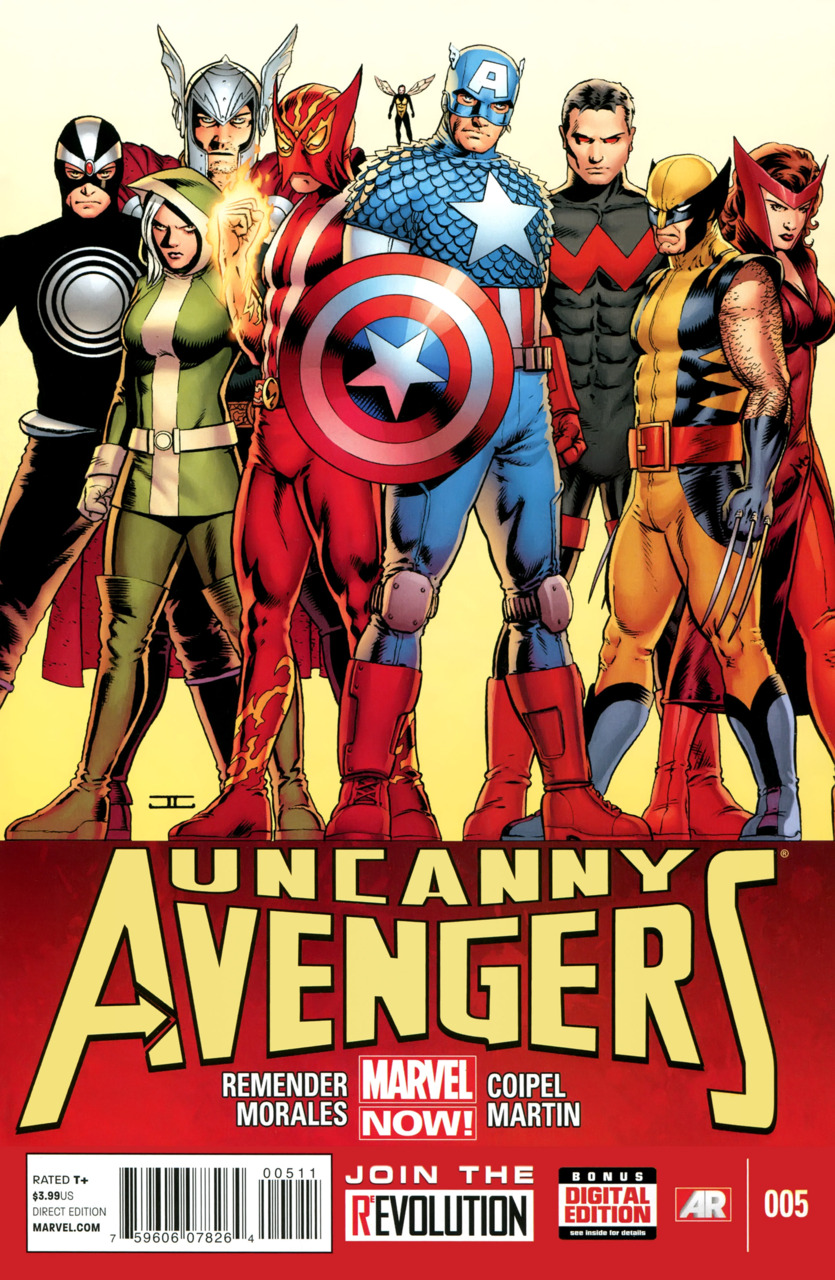 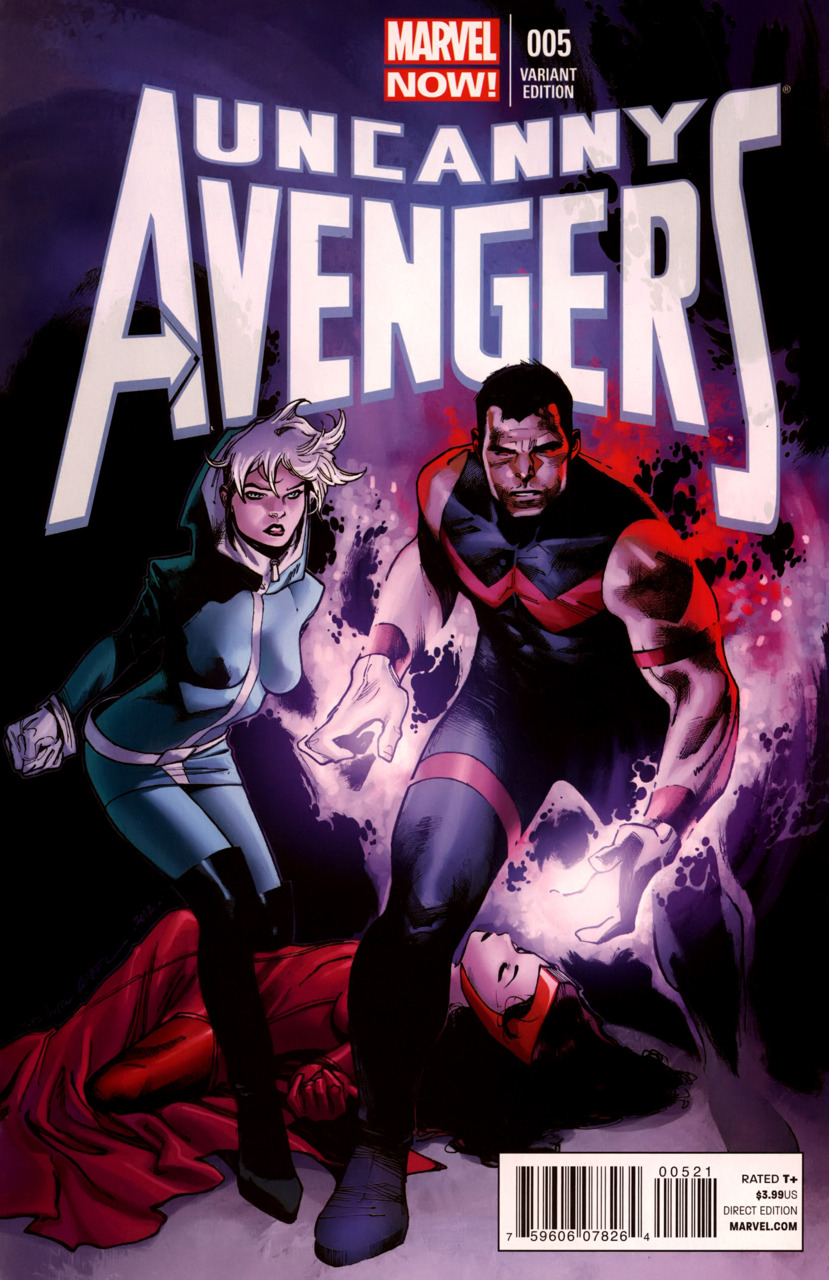