I've recently decided to go back and review the issues in this series that I haven't reviewed, having re-read them, but my reviews will be written as if I've not read the issues that follow them.

The Red Skull is using his new psychic abilities that he's taken from the dead Professor X to turn the humans against the mutants, and the Avengers Unity Squad are stuck in the middle.

This was a brilliant issue, and the series really seems to be picking up. The scheduling of this series hasn't helped this series, and although having re-read this, the first time I read it I'd forgotten a few things from the previous issue, which isn't good. Anyway, Rick Remender is continuing to give us a story that's not just interesting, and entertaining, but one that's worthy of the characters involved. As I said the last issue was a little slow, and although this one was also slightly slow at times, it felt much more exciting, and actually felt like a team book (even though Captain America, Thor, Wolverine, and Havok worked together last issue). I've also much preferred the way Remender's written this issue, and really loved how it had a narrative, as although it felt a bit weird at the start, it really helped the story, and made it feel more emotional, whilst also giving it more depth. I've also loved how Remender's made the story much more suspenseful now, as with Red Skull having the ability to control minds it really changes things, but I'll talk more about that later on in my review.

John Cassaday continues to amaze me with his art, and although that was the reason for the delays in shipping, it was well worth the wait. The detail in Cassaday's art is simply stunning, as everything looks amazing, and even the smaller details look realistic. I also love the emotion he shows in the characters facial expressions, and the way the move, as although he's not necessarily the best artist at showing character emotion, he still manages to do it, and you can easily see that he makes an effort, which is always nice, as it also makes the art more dramatic. Speaking of dramatic, I also love the way Cassaday lays out his artwork, and how he knows where to position the characters, and whether or not to have them in the foreground or distance, as although Remender will have the description in the script, Cassaday's art also shows it brilliantly, giving a very dramatic tone to the issue. Cassaday also handles the action brilliantly, as everything feels so exciting, and at certain times nothing short of epic.

Red Skull was powerful enough before, but now that he's got Professor X's psychic abilities, he's virtually invincible. The return of the Red Skull has been about the best thing about this story, and although I've also enjoyed seeing the coming together of the Avengers Unity Squad, it's been the Red Skull that's stole this story, and rightfully so. I briefly said how I felt about the return of the Red Skull in my review for issue 2, but I'll continue a bit more now as I didn't go into detail as to avoid spoilers. What I liked most about Red Skull's return was that it was very unique, and although it seemed a bit obvious after I found out, I still felt that it was much more interesting than just bringing him back from the dead. I've also liked that he's been involved in this opening story, as due to him being typically a Captain America villains it's perfect to have him in a story that features him, but due to the Red Skull being a very racist person, it makes sense that he'd hate mutants, seeing them as scum, and monsters.

Red Skull's S-Men have also been a very interesting addition to this story, and although they've already featured in the past, I felt that they were more interesting in this issue. The way that the S-Men, and the human's controlled by Red Skull attacked the mutants was just brilliant, and very brutal, which I found amazing. What I liked best about this was that despite seeing how easily human's can be controlled by a telepath, we also got to see a bit more about the S-Men's personalities, as well as how they became what they were. I also loved how they were emotionally charged, and that they saw the Red Skull's dreams as the greater good for humanity, which was very nice, all be it unjustified.

Although Cap, Thor, Wolverine, and Havok have worked as a team prior to this issue, I felt that they operated as unit much more efficiently, and although they would split up, it still felt like a team. I also really liked how Havok took charge, and that although he's still new, and nervous in this leadership role, he's not going to waste time. I also found it very interesting that Cap would disagree with Havok's decisions, seeing that it's better to stick as a team, but I found it more interesting that Havok stood up for himself saying that if Cap wants him to lead then he shouldn't second guess him. What I also loved was that Havok got a lot more confidence in this moment, and he quickly went from someone that was nervous, to someone that was confident in what he was doing.

I try and avoid spoilers, but due to the issue having been released a few months ago, as well as the fact I found this particularly interesting I felt that I'd mention it, so those who haven't read this and don't like spoilers of any kind (like me) you've been warned. There was a sequence at about the half way mark of the issue were Captain America would become conflicted, as Red Skull's telepathic command for any humans to kill, the mutants was fighting his moral resolve. This was brilliant, as with Red Skull being Cap's arch enemy, for there to be a chance that he could control him to do his bidding was amazing, and really interesting, and emotional. The best thing about this sequence in my opinion was the way Remender wrote it, as it was really emotional, and although there wasn't quite as much narrative as there's been in the rest of the issue, it was used properly, making the sequence feel more dramatic. I also loved the way Cassaday drew the sequence as you could see the struggle going on in Cap's head, and between the Remender and Cassaday they really produced a sequence that was both dramatic, and emotional, as well as adding a lot of depth to it.

The issue also had a very surprising ending, and although I won't say any details as to avoid spoiling it, I will say that it was unexpected, and the follow-up in the next issue should be very interesting.

This series is finally starting to pick-up, and although the shipping schedule has hurt the overall flow of the series on release, if you re-read the issue along with the others it feels so much more exciting. This issue was full of amazing emotional conflicts, as well as having some surprising, and very interesting moment, which were simply outstanding. I would highly recommend this issue, but would also recommend reading it as a whole, along with issue 1, 2, and 4, as it's a much smoother read.

Stand and be Counted 0

It was totally worth the wait for this issue, Clone Red Skull has landed in american soil and he's got superior plans to it's people. The highlights of this arc story are the ability of Rick Remender to recycle old ideas, turning them into interesting concepts once again, for instance the "mutants are big threats again" - before AvX events, since mutant kind were almost extinct and now there's a rekindle of them, it's an interesting take to writers explore humanity's fear of them once more. Spea...

Remender and Cassaday are worth waiting for 0

It seems like forever since we got a new number of this comic. Maybe it has been forever. In the time where Bendis has managed to out six issues of All New X-Men Rick Remender and John Cassaday have only managed a couple of issues of Uncanny Avengers.  Fortunately it is a comic worth waiting for. Remender writes a great Red Skull and he continues to create nasty, weird villain teams. Cassadays art gives a comic a classic, almost epic feeling and it really makes Red Skull feel like a sort timeles... 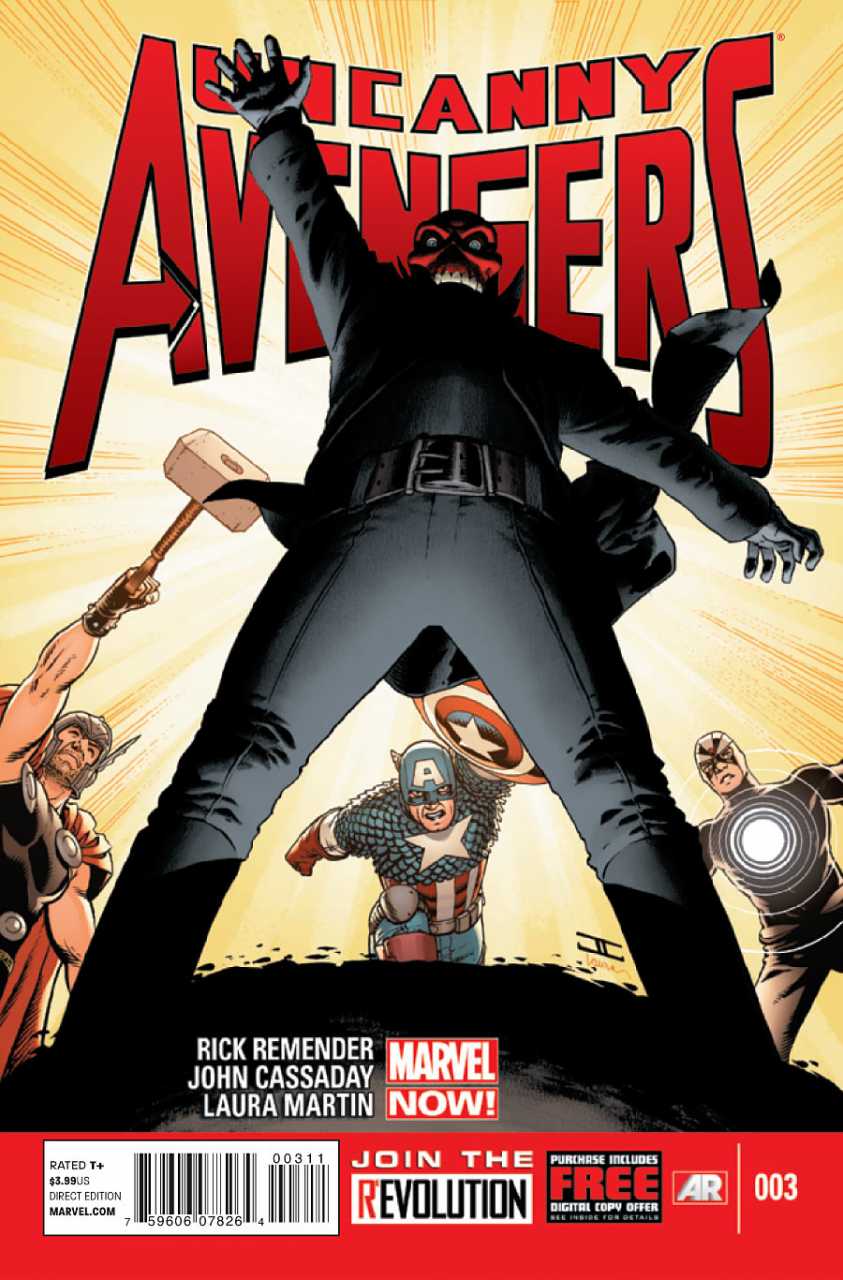 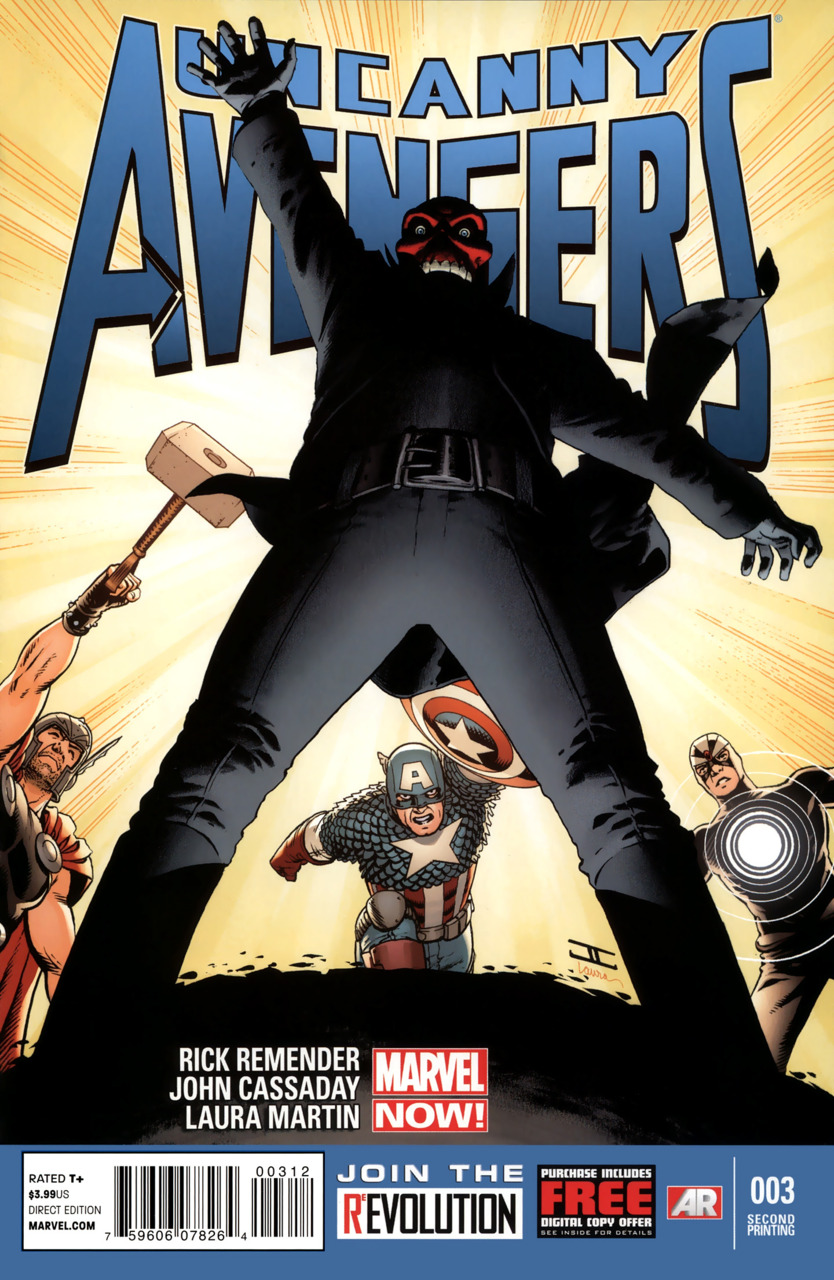 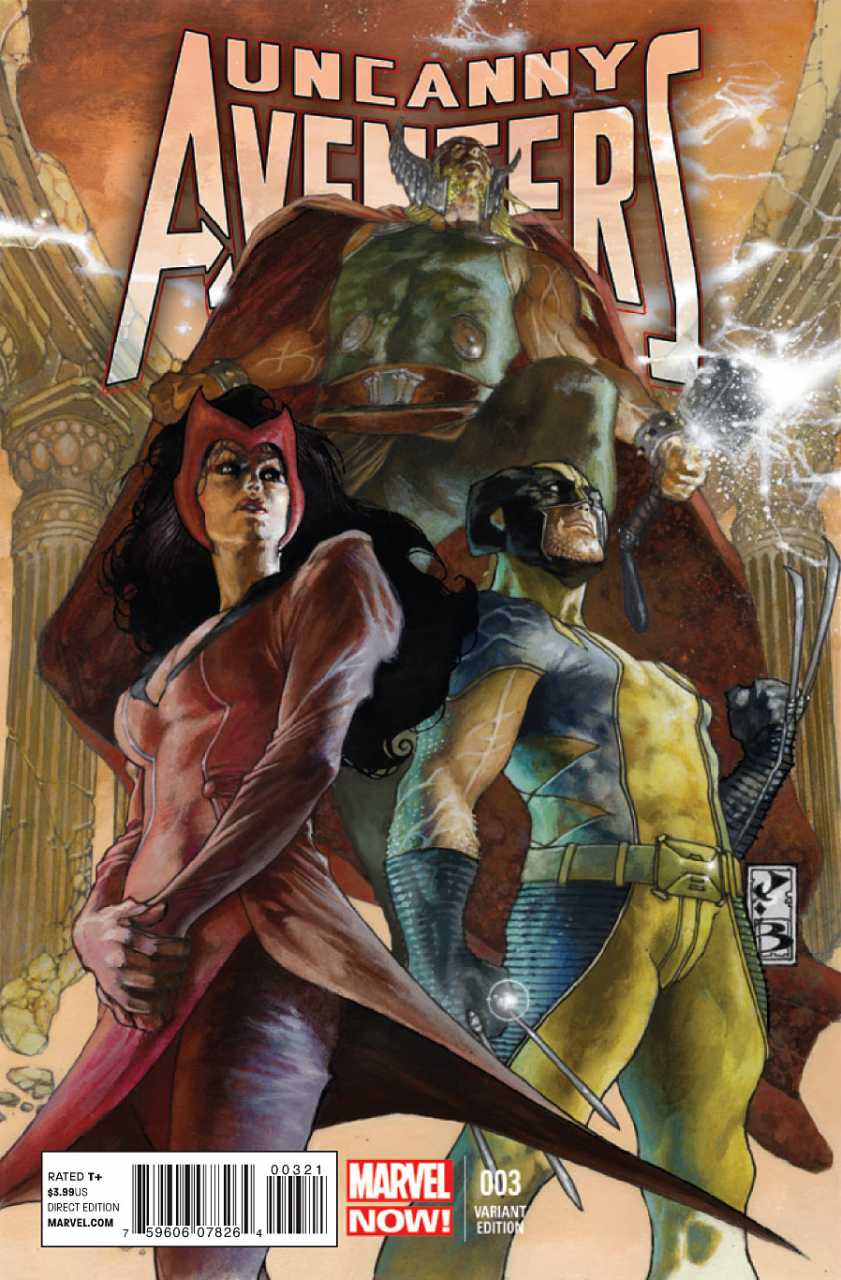