Apologies for no reviews, but have been very, very busy recently.

After an extremely controversial and shocking previous issue this issue steps back from what it did last issue and just heads straight on with the overall plot. This whole series has been about consequences, Thor’s celestial killing axe, the Unity squad being at odds with each other and other such events in this series and we once again see more of this. I liked the issue it was great fun and continued the sense of scale and feels like an event still, although the issue wasn’t totally perfect.

Let’s get the minor problems out of the way, firstly I think the emotional fallout from the deaths would drag the story down, so Remender wisely has left it as a driving force for the story going forward and not gone into an issue of Wolverine raging (bit of that though), but I bet bits of it are coming, as it’s too important to miss. Secondly stop using the Watcher as a reason to make the book feel grimmer, that’s a fairly unoriginal use for him and his inclusion felt a bit rushed and forced. Books like Nova have a more interesting use because he’s become an inspiring figure to Sam and a source for comfort, he never speaks in Nova; however, in this he’s mouthing it off about doom and gloom in this issue.

There are multiple plots going on in this issue, but I’ll try and keep it all short. The majority of the issue is devoted to what has been happening with Wasp and the Sentry. After the complete absence of both of them from the previous issue it makes sense to include them more and the whole fight is worth it. The action is intense and his is one of the best portrayals of the Wasp I’ve seen for a while, although her new costume is pretty bad. Wasp is incredibly well portrayed showing off her personality and also what she can do with her power set. The wasp will never beat the Sentry though and he shows off some truly amazing powers and I’m really interested in where he is going next in this story, but he’s super powerful one moment and owned by something quite beneath him the next. Thor also gets some good moments in that scene.

In this issue we would also see the fallout from Scarlet Witch’s spell and how even in the middle of a fight all of the mutants are taken into pods to go to the Apocalypse Twins new haven for Mutants, even Wolverine. This is obviously the main focus of the whole book and all of the Apocalypse Twins choices are what drives the whole book and it’s evident in this, especially with the final page, which is a real surprise, but makes perfect sense.

Steve McNiven is a good fit for this series and he’s one of the few artists that art has that sort of “epic” look to it event worthy even, so him on this series, and this arc in particular is truly fantastic. There are a few cases early on where it lacks the detail and looks slightly rushed, but that is only for a page or two; however, the rest of the issue is amazing and I love what McNiven has done and some of this is definitely some of his best. The more epic scale moments look the best, like the final moments of the issue and the Sentry parts, but I like how he does the smaller stuff with Wolverine and the Apocalypse Twins.

This was an excellent continuation to this series and I’m very tempted to give it a full score, but a number of minor problems added up to something bigger, but this is still just about the best Avengers series on sale, definitely the most consistently great Avengers series.

Other reviews for Uncanny Avengers #15 - Rapture

My first review on here, so dont punish me too much for my opinions.Rick Remender's story is starting to come together more and more, in each passing issue we get a little bit more clearity, and sometimes even more twists. Last issue we had some major deaths, and in this issue I believe many expected to see a fallout from those deaths. It appears as though Remender has strayed from the path most expected and continues to unravel his tale, not leaving much in the way of emotional fallout from t...

See the Review Rating Overview page on my blog for more information on how I rate each comic.Cover &amp; Solicit - 4/5Art, Colors &amp; Inking - 4/5 - Weighted DoubleLayout &amp; Flow - 5/5Story - 5/5 - Weighted TripleVerdict - 4.6 (9/10)- For additional ratings and previews of this issue, visit my blog at Images Unplugged.... 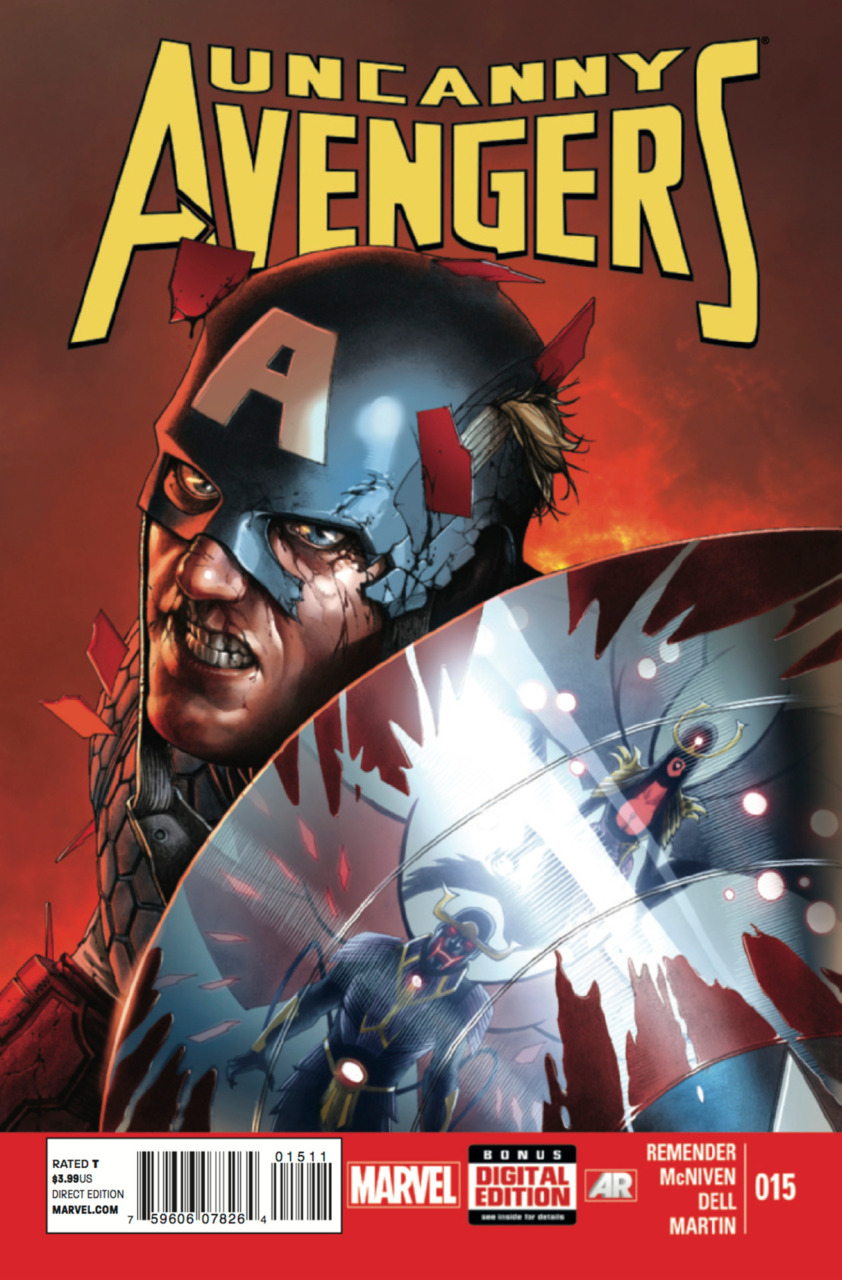