Putting the Team Together

I decided to go into this series with an open mind as prior to reading this issue there were things that I was looking forward to, like the characters and seeing Punisher and Deadpool two of my favourite underrated characters team up, whereas I wasn't too sure if I'd like Steve Dillon's art as I usually don't like it.

This issue sees Thunderbolt Ross A.K.A the Red Hulk putting the Thunderbolts together. He goes all around the world from Somalia, France and Afghanistan to recruit his Thunderbolts, Punisher, Deadpool, Venom, and Elektra.

This was a good start and the issue wasn't as bad as I was dreading. It still wasn't as good as I hoped but considering what I feared it could be I'm happy enough with the outcome. Daniel Way has done a good job introducing the characters in this issue and I love how he's made Thunderbolt Ross the leader of this group. Due to this issue focusing on Ross assembling his group of killers it didn't give any time to explain what his overall goal is or show much action. Although this issue was slow Way has instilled more faith in me that this series can be good and I hope he delivers to that. I also liked how he handled all the different character and although besides Ross and the Punisher, they didn't get a lot of time you could notice they're unique characteristics. I'm also interested in seeing how Way writes Deadpool in this series as he had plenty of time writing him in the previous Deadpool series. The current Deadpool series is however a lot different and the unique inner voices style Way added whilst writing Deadpool has gone. This leaves the question if Way will write him with or without the voices, for continuity's sake I hope he writes him without.

The thing that put me off this series was Steve Dillon as artist. I've never really liked his art in the past and especially the way he draws women. In saying that I actually liked his art in this issue. It still wasn't as good as most other artists but it's a lot better than I've seen in the past. I particularly like how he draws Thunderbolt Ross and Venom, and how he showed of Venom's symbiote powers. I've never minded how Dillon's drawn Punisher in the past, and he's one of the better Marvel characters I've seen him draw. I would however have liked him to have drawn Punisher similar to the way he was drawn in the most recent The Punisher series as the newer skull shirt was better. I still wasn't to keen on how he draws women. When I first saw Elektra I thought this isn't that bad, and that it's better than he's done in the past, but when he drew a closer up version of her face or her face from the side she looked more like a man than a woman, which wasn't nice.

Seems not a lot happened besides the team coming together I will talk about each of the five character involved individually and say what I think they will bring to the team and what I expect from them. I will start with the leader of the group Thunderbolt Ross. He's a natural leader having served in the army, and has always shown a bad side. Another reason he's a good choice for this team besides his pedigree, and the fact he's a Hulk is that he's got Thunderbolt as his nickname so it makes sense him leading a team named Thunderbolts giving the name a dual meaning. I'm looking forward to seeing more of Thunderbolt Ross in this series as most other series have him in his Hulk form. I still however want to see him Hulked out a lot at the same time as it would be daft having this team of killers lead by a Hulk and not have him Hulked out. What I'm basically saying is that I'm hoping to see a more balanced view of Ross as both Red Hulk and Thunderbolt Ross.

I've always been Punisher fan and him being a part of this team is what mainly drew me towards buying this series. I was so disappointed when I heard that Punisher would no longer have a solo series once Punisher: War Zone finishes. I do however question the timing of this series in conjunction with the Punisher: War Zone series. I would have thought that Marvel would have waited until the end of the War Zone series till putting this series out, as it would have helped the continuity of both series'. I am however looking forward to seeing how Way handles Frank and what he will bring to the team. He's never really been a team player but with a team full of killers I think he'll fit in, it will just be a matter of whether the others keep to only killing those who deserve it. It will also be interesting to see how Punisher and Ross get along as they're both ex-army with the highest military training in Marvel apart from Captain America.

Deadpool's part in this team will also be interesting as the Merc with a Mouth has worked with various people in the past including Weapon X, Cable and most recently the X-Force. The way Ross went about recruiting Deapool was interesting asking for him to volunteer like he did with Weapon X. As I said earlier I'm mainly looking forward to seeing Deadpool fight alongside Punisher as both have been in my top 10 favourite characters for a few years, and I've felt that despite their loyal fan base they've been very underrated for to long. I'm looking forward to seeing Deadpool work in a team again as he was brilliant in Uncanny X-Force. It will also be interesting to see how Deadpool will react alongside the other members and if he will try and prove he's better with a blade than Elektra, or better with a gun than Punisher or Venom. I also hope that Deapool brings his funny banter to the series, and his jokes and I know that Way can do that if he wants to.

Venom is also an interesting addition to this team and seems to be in demand after joining the Secret Avengers. Since Flash Thompson has been Venom he has really brought some life back to the character and has made Venom into a more serious character as well as a decent hero. The way he reacted to Ross' visit was very good and I loved how he kept his proper army sense of respect, and how he considered Ross a legend. It will also be interesting to see three characters who have been army trained feature in this group as well as their different characteristics. I'm looking forward to seeing if Venom will be the cooler head in the group, if there is one, and how he will react in certain situations that he's less experienced than the others are.

Finally Elektra. She is probably the most unique addition to this group. Apart from being the only female member she is also the most mysterious usually working in the shadows. Although she's worked for and lead The Hand, and worked alongside Daredevil in the past, she hasn't been the best team player especially whilst working with people she's not ordering around. It will also be interesting to see how she reacts to all the different personalities throughout the group as she is usually a very serious character. I will however be looking forward to seeing her bring her ninja style to the group, and see her kicking but, which I haven't seen in a while.

A good introduction to a brand new team. Although this issue wasn't brilliant, and a bit slow at times, it does show great promise that the series will be good in the next few issues, and I hope it is. I would recommend this series to people who are fans of any of the characters involved as it's too early in the series to determine if they are a good addition, or if the series does them justice. It's also a great issue to introduce newer readers to these characters as you don't need any prior knowledge of the characters to enjoy this issue.

Other reviews for Thunderbolts #1 - Enlisted

***SPOILER FREE REVIEW***I admit, I was pretty eager for this title to come around. The idea of a group of anti-heroes/near-villains like the Thunderbolts being assembled by General Thaddeus "Thunderbolt" Ross (pun intended) should be a fun title. Unfortunately, this title was a rather large let down.Reading the first issue of Thunderbolts reminded me quite a bit of last week's FF. Both comics were just small peeks of things to come, mostly focusing on the assembling of the respective teams. Onl...

Thunderbolts #1 - Enlisted by circularlogic on December 05, 2012

I was expecting worse.Mostly because of the creative team (Daniel Way is probably one of the few people able to write a popular book for over 4 years and remain almost universally criticized by just about everyone), but honestly what got me upset about this most of all was the inclusion of the Punisher. Castle has a reputation of being an often over-used character that few writers are able to get right. In fact, I'd argue the only time I truly felt he was used to full effect was in Greg Rucka's ... 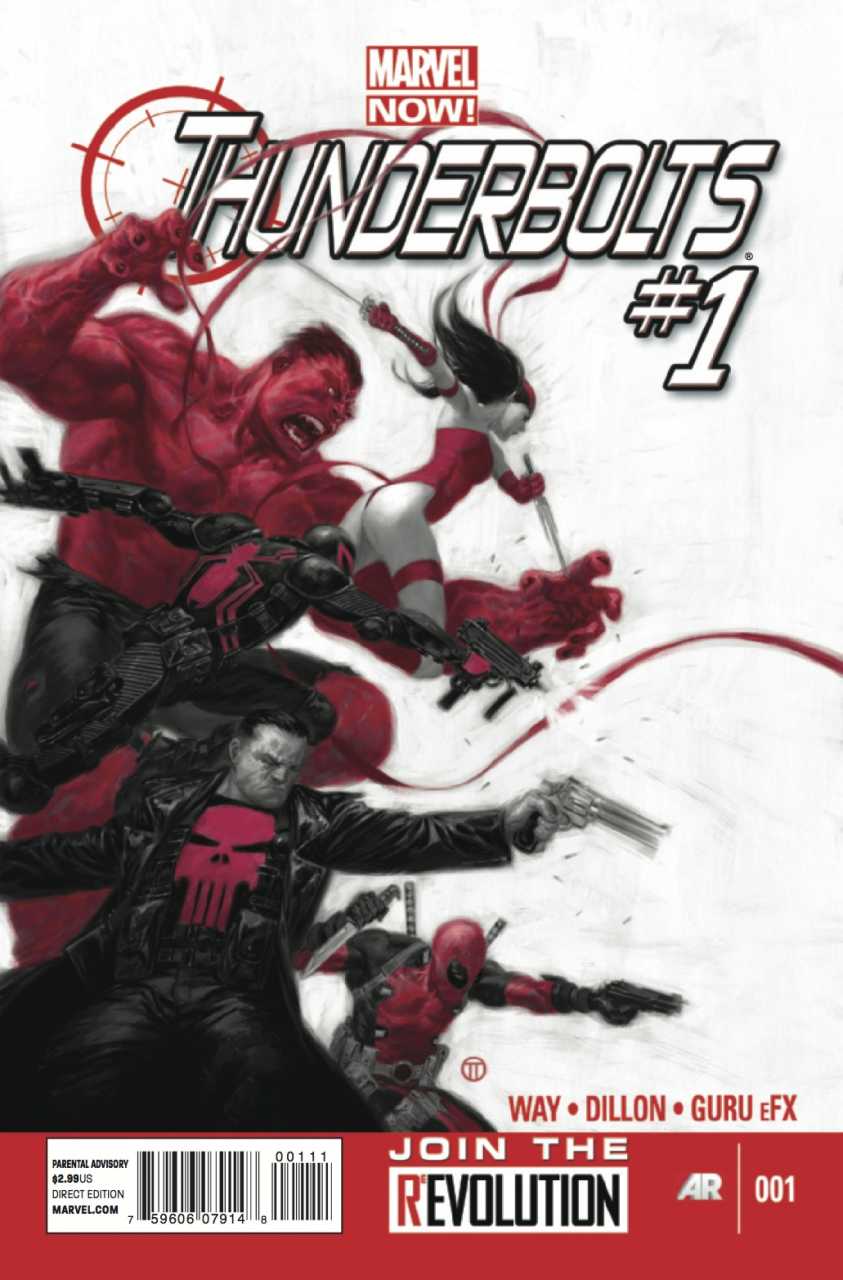 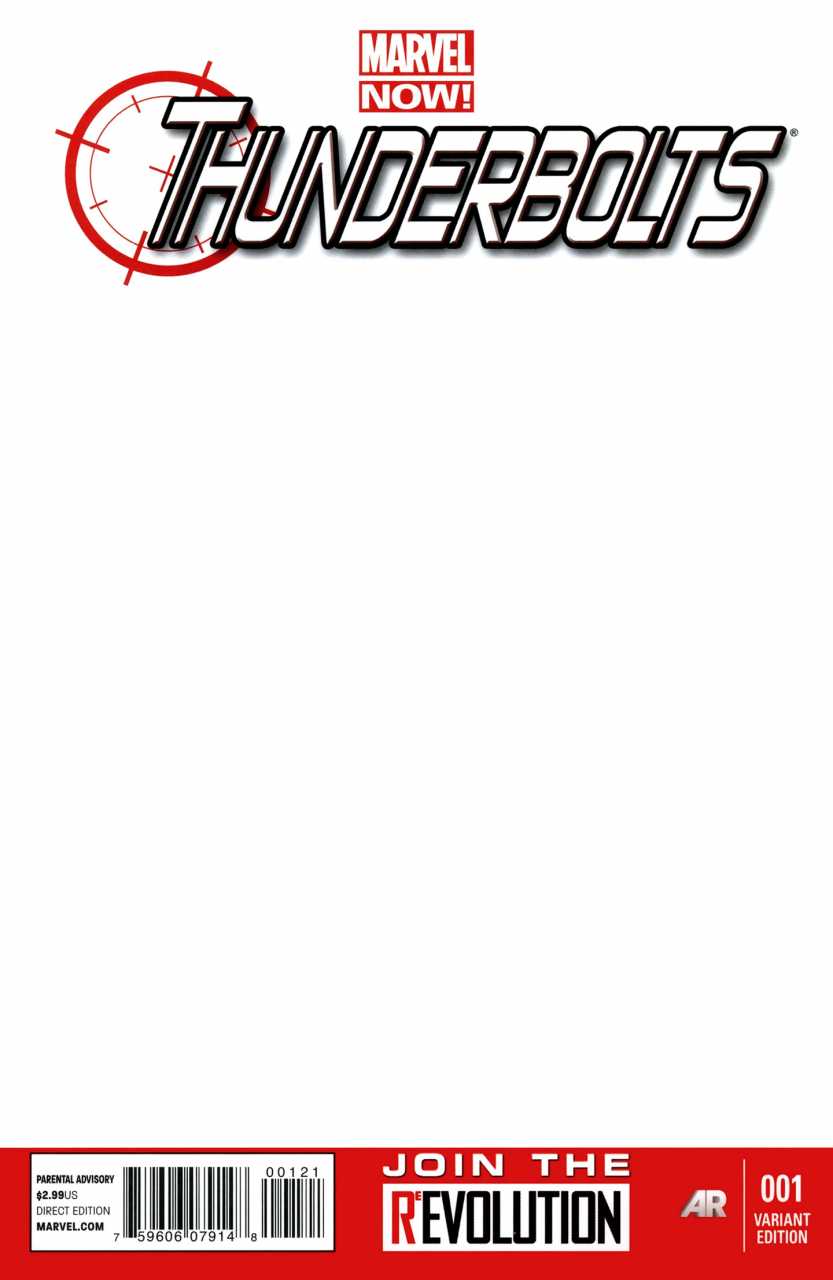 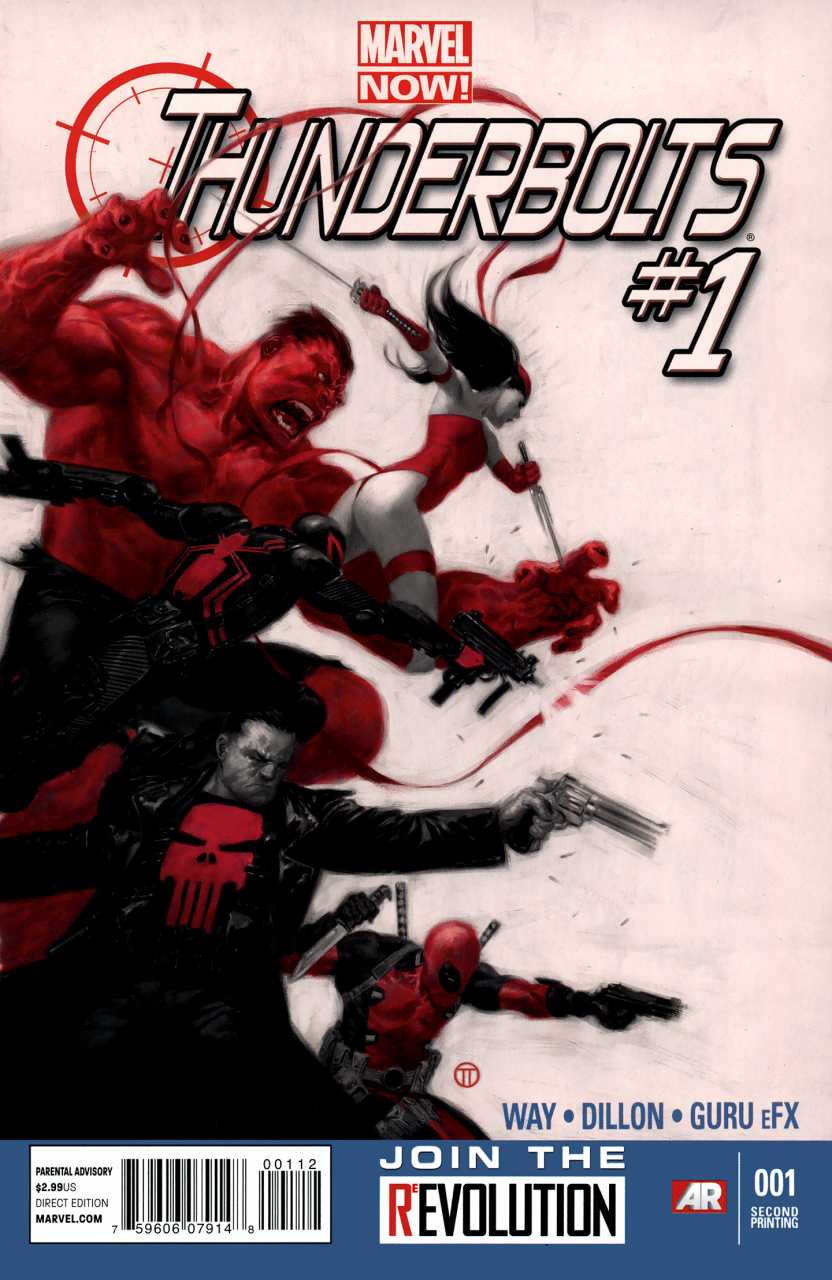 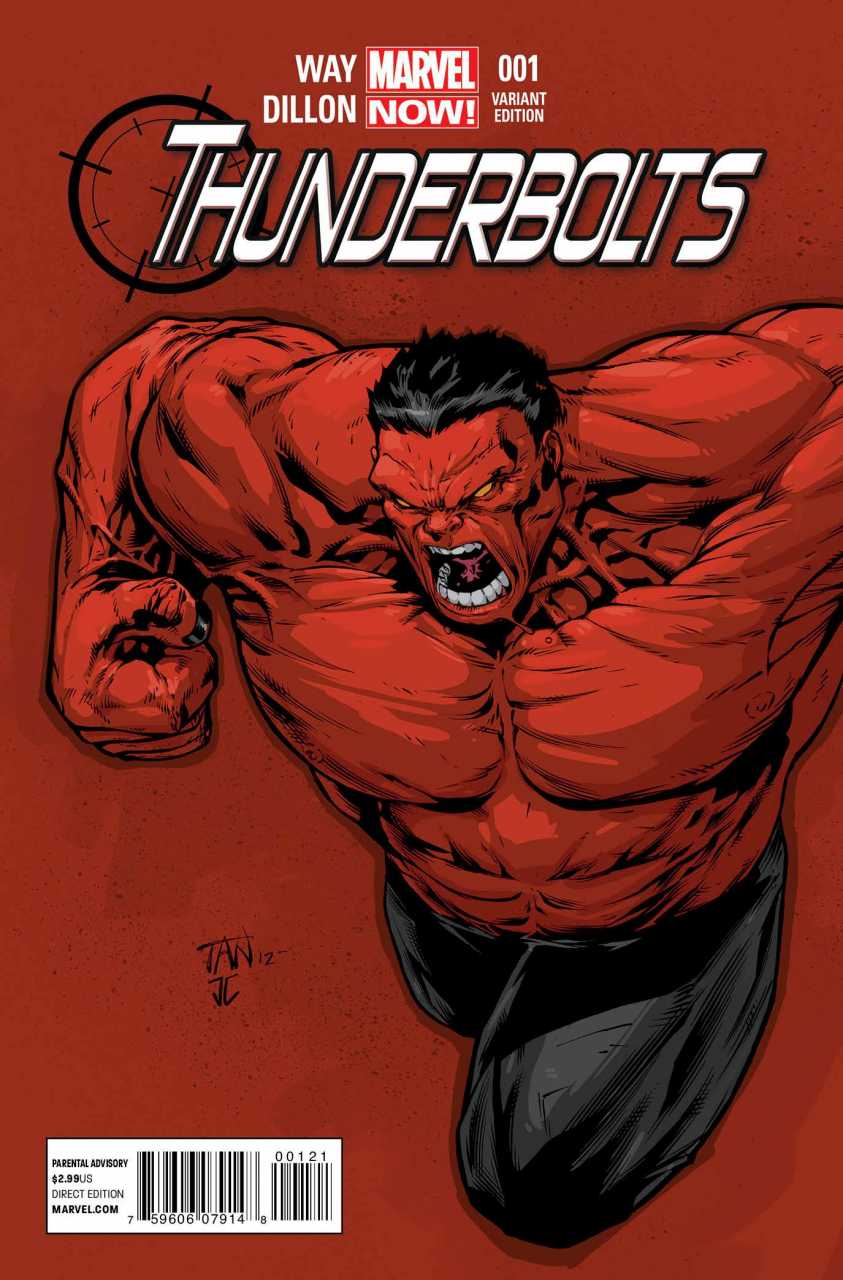 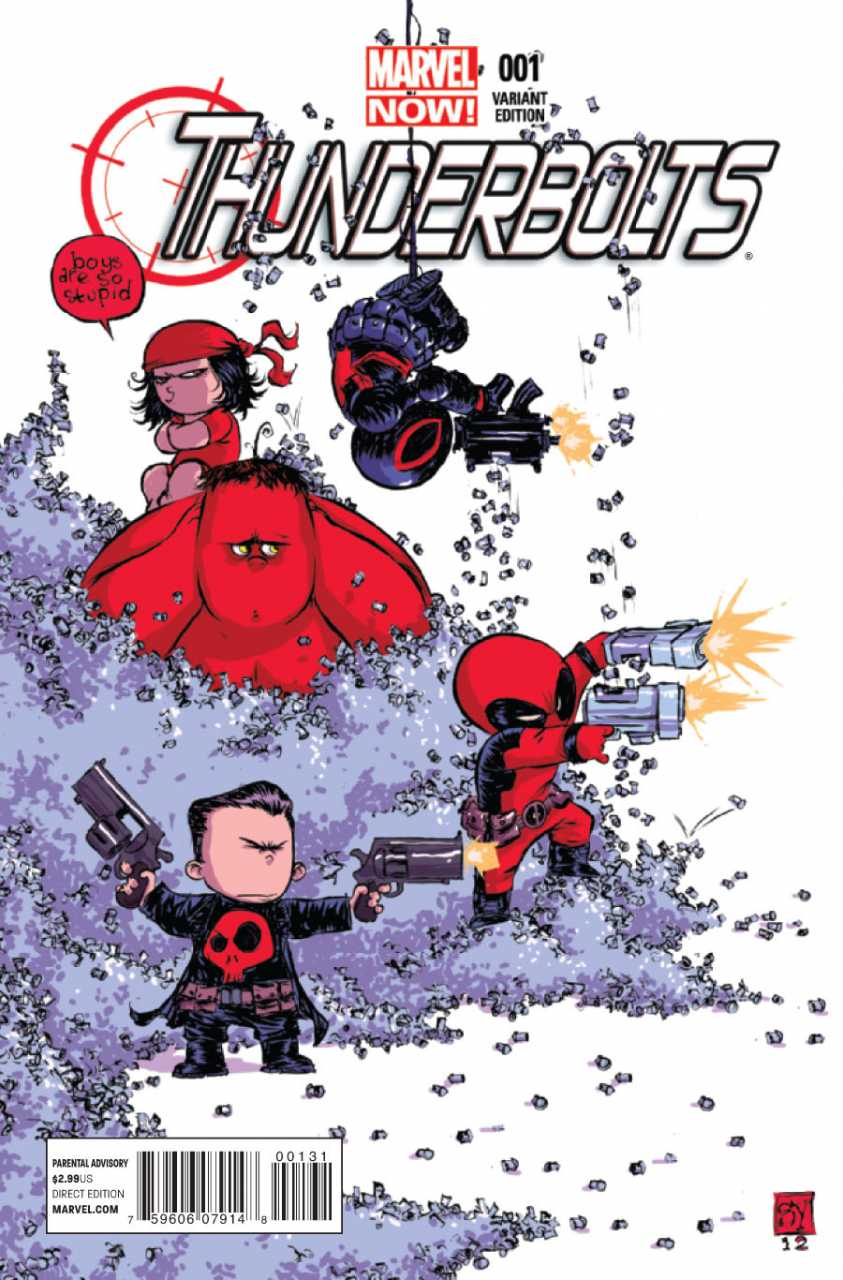 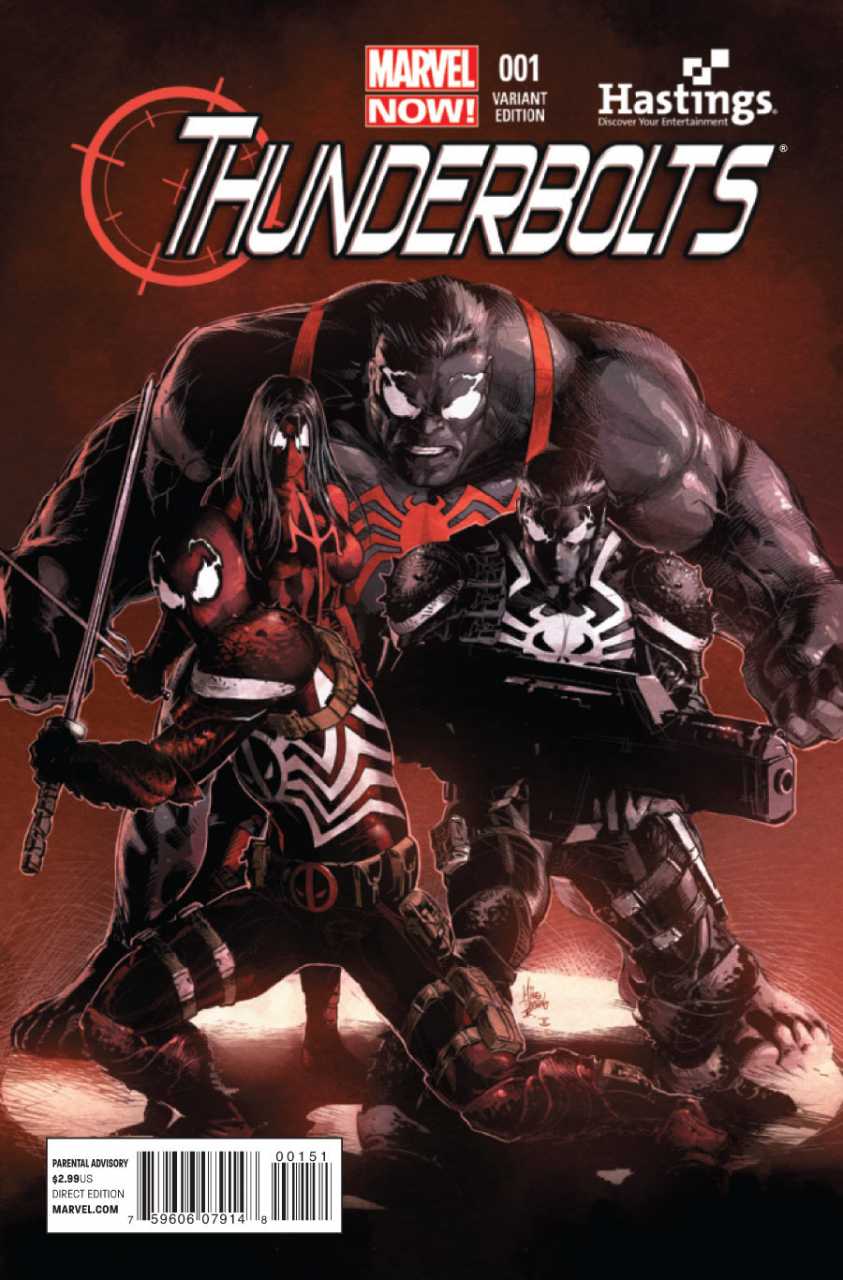