This has been a fantastic series, and much better than I ever expected it would be. Jason Aaron has done a brilliant job, and I haven't enjoyed reading Thor as much since J. Michael Straczynski's run. I really hope that this level of quality continues after this storyline, and doesn't drop, like it did in Aaron's The Incredible Hulk series.

This issue starts with an old Thor battling Gorr's Black Berserker's. The story jumps over the timelines between the younger, older, and present Thor, and it is revealed that Thor has been left as the last God Gorr will kill.

This was another brilliant issue, and Aaron continues to amaze me. Aaron has continued to use Gorr to his best advantage throughout the storyline, not overusing him, and it's hard to think that this was the same writer who created Vegetable in Incredible Hulk. Aaron has also continued this by introducing a brilliant side character in the form of Shadrak. Shadrak was introduced at the end of last issue saying that Thor was responsible for the deaths of all the god's Gorr has killed, but I'll talk more about that later, without any spoilers, as usual. The main thing I've liked over this storyline has been how Aaron has handled the different timelines, knowing when to change between them, and what to use in each one. To be honest I originally thought this would be a terrible idea, but I couldn't have been more wrong, as it's what makes this story so good.

The art in this issue was also fantastic, and Esad Ribic continues producing brilliant artwork. Although there is still the odd weird facial expression, the artwork overall is outstanding, and I can't remember the last time I saw Thor drawn as good. The detail throughout Ribic's art is also phenomenal, and easily makes up for the weird facial expressions. The emotion throughout this issue was also fantastically handled, and I always appreciate when artists take time to show emotion, as it really shows the mood's of the characters. Ribic also drew the action throughout this issue brilliantly, and although Thor was mostly on the back foot, it was still clear that he was the main person to watch.

This issue started with the Thor of the future being over-driven by Gorr's Black Berserker's, leaving him in a poor state. Since the end of the first issue I've been looking forward to this moment, and although I forgot about it, due to the amazing events of the last few issues, I'm glad to see the story return to this point. It was interesting seeing Thor's reactions during this sequence, as he lacked determination, and appeared to welcome death, wanting it to come sooner rather than later. This shows how much power Gorr has, as I never thought I'd see Thor back down from a fight, even if he was losing, and I certainly never thought I'd see Thor in a position where he'd prefer death, so I'll be looking at how this turns out next issue.

This issue also expanded on the character who is revealed to be called Shadrak, who was introduced last issue, and is also revealed to be from the Diamond Moons, being the God of Wine and Waterfalls. I was looking forward to seeing more of this character, as he mentioned at the end of the last issue that Thor was responsible for the death of the god's. This sequence was brilliant, and although I felt sorry for Shadrak at the end, as he's been Gorr's prisoner for many years, I still think his anger towards Thor isn't fair, and although from a certain point Thor is responsible for the death of these god's he's not the person who actually killed them. I hope that Shadrak is featured in the next issue, and if not that he appears some time further on in the series, as he's quite an interesting character, and although there is many more interesting characters, I'd like to see more of his development as a character.

As I said earlier, I've loved how Aaron has handled Gorr, as he's always made him menacing, and always shown him having the upper hand, and appearing unbeatable, which builds up the final battle between himself brilliantly. Although I can think of many villains that are better than Gorr, I can't think of many as good as him, that have been created over the last few years. Although it has became clear that Gorr wants to kill every god, I'd like to know what his motives are for this, as his characteristics whilst talking don't appear to be one of a psychopath, and he does appear to be a man with a motive, even if it's not apparent what his motives are. I've also loved seeing a villain that overpowers Thor as much as this, as Gorr always appears to be one step ahead, and looks unbeatable. Don't get me wrong Thor has had ton's of major villains over the years, with some of them out-thinking, or overpowering Thor, most notably Loki, but none have appeared to be as dominant as Gorr is. I will really be looking forward to the final battle between Gorr, and Thor next issue, and I also hope that it is revealed exactly what Thor did to anger Gorr.

This was a phenomenal issue, and this series is easily one of the best in the Marvel NOW! relaunch. I would highlt recommend both this issue, and the entire series, and am really looking forward to the conclusion of this story.

Other reviews for Thor: God of Thunder #4 - The God Butcher, Part Four of Five: The Last God in Asgard

SummaryThe “The God Butcher” story arc continues as the three time-specific plot threads advance. The bulk of the issue concerns present day Thor and his quest to locate Gorr and put an end to his massacre. Past-Thor remains in the clutches of Gorr, chained and unable to avoid torture, while Future-Thor, the last surviving Asgardian, is locked in perpetual battle with Gorr’s army. The plot threads begin to converge by the end of the issue and the bigger picture begins to be revealed.What I liked...

I've never liked Thor in my entire life, until now. honestly, i adore this book. i don't even know where to begin. Ok, first things first, the transitions between past, present and future are very well handled, the flow feels naturally and more importantly it doesn't feel like your getting cut off the main story, in fact, the transitions happen in such a well adjusted manner than your stuck with the main events through the book. Moreover, I love Gorr, i seriously like him as the villain here, he... 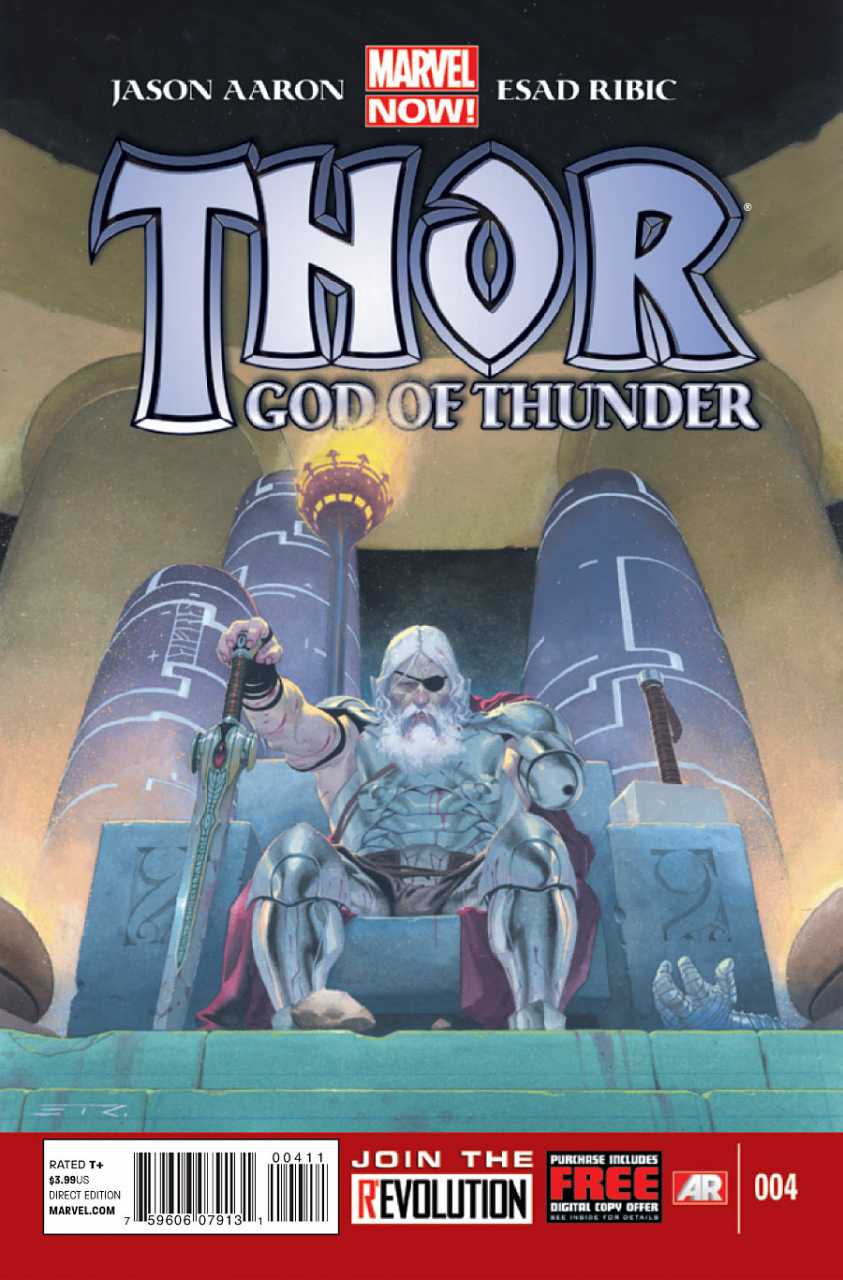 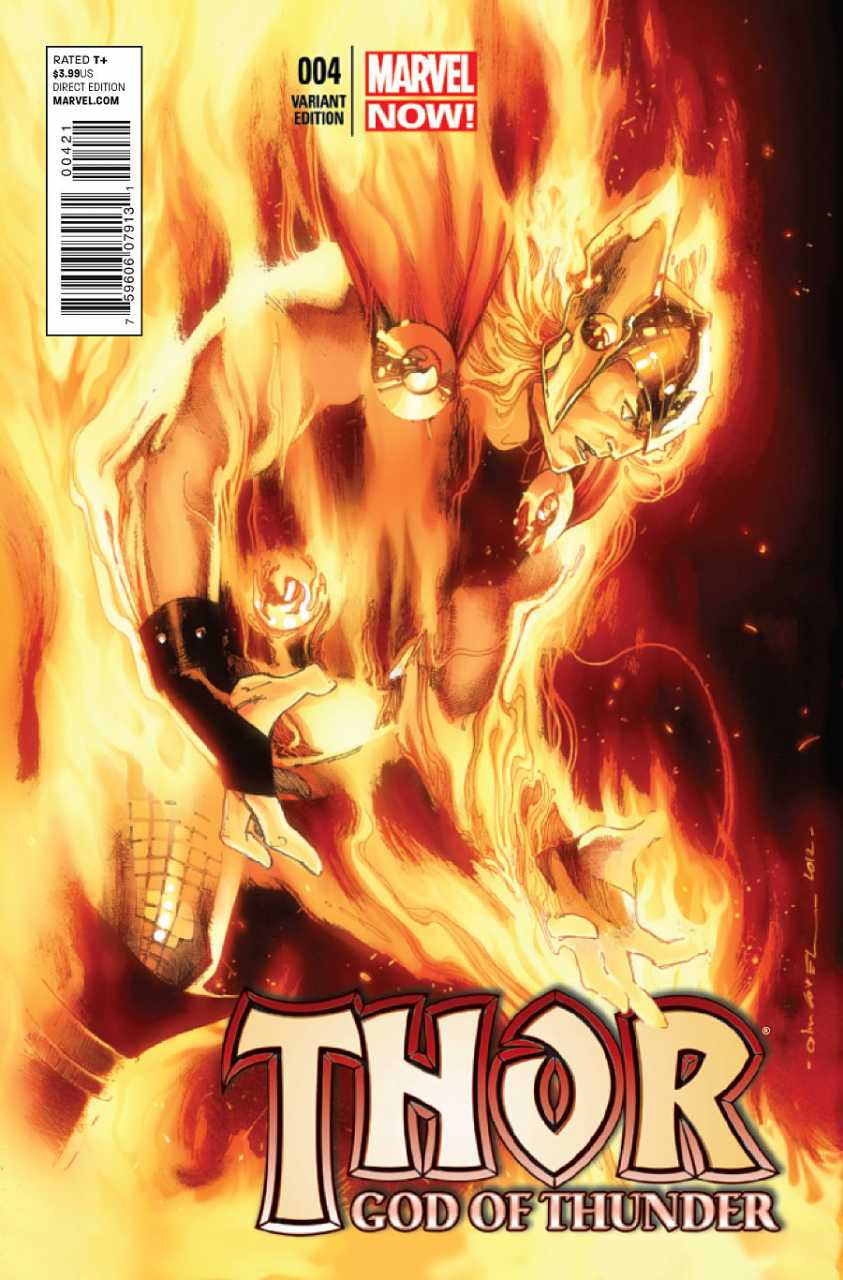