johnkmccubbin91's Thor: God of Thunder #3 - The God Butcher, Part Three of Five: The Hall of the Lost review

I have really been enjoying this series, and it's been one of the bigger surprises out of Marvel NOW! Jason Aaron has done brilliant work in the past but the last series' I read of his, Incredible Hulk, and Wolverine and the X-Men were a bit poor, in WATX's case at least during Avengers Vs. X-Men, as I dropped it after that. I have however heard it's still inconsistent though. This series has however been very good and I have loved every issue, which was surprising as when I heard what type of story it was going to be I was put off.

This issue is mainly set in the present with Thor looking for the victims of Gorr, the God Butcher. It also jumps between past, and future (mainly past), and shows Thor trying to find Gorr's cave, as he's not been there in over 1,0000 years.

This was another fantastic issue, and I'm really glad that this has stayed at the quality it is. Although this issue wasn't quite as good as the previous two it's still brilliant, and the difference is very, very small. Aaron has done a brilliant job in introducing a new villain that is a threat to all the god's, and that's saying something. I've also liked that Aaron has managed to transition between the different timelines perfectly, and I love that he uses the monologue to set up these transitions. I've also liked how he's used Gorr sparingly, as it's easy to over use a villain in a storyline, and ruin it, whereas cause Aaron's used Gorr sparingly it'd built up more tension, and drama, and when we do get to see more of Thor vs. Gorr, whether in the past, the present, or the future it should be brilliant, and the build up should help make it even better.

I've really enjoyed the art throughout the series, and Esad Ribic has done a marvellous job. Although the facial expressions are a bit weird from time to time, and more so in this issue, his art is still brilliant, and very nice to look art. The detail is just outstanding, as there is detail in everything, whether it's scenery, or characters. Although his facial expressions are a bit weird from time to time, I do like that he's making the effort to show the character's emotions, and expressions, as you have some artist's that don't bother at all, and facial expressions/emotions are one of the key things in telling a story, or at least in my opinion. I also love how he puts a lot of drama into his artwork, and that it feels like you're watching a movie at certain times. I've noticed that a lot of artists are doing this now, and I personally love it, and think it adds a lot more to the story.

This issue sees Thor searching for the missing god's, and seeing if there's any connection between their disappearance, and Gorr. I liked that there's a place where all the god's throughout the universe can come and find information on other god's, whether they're living, dead, or missing. The conversation between Thor and Librarian (fitting name) was very interesting, and I liked how Librarian spoke to Thor, like he wasn't anything special. That was the thing I liked most about The Infinite Embassy, that all immortals were treated equally, and that no one got any special privileges. I also found it funny that the waiting period to speak to the Parliament was 200 years. Librarian also kind of reminded me of the chief librarian from Star Wars Episode II: Attack of the Clones, as they both had very authoritative attitudes.

Thor's journey to find these missing god's was in it's self very interesting, and I liked that it was done with monologue, showing him finding these god's that have actually been killed by Gorr. I also liked that Thor got to face Gorr's minions, and that he was getting angry because he felt Gorr was a coward for not meeting him face to face. It was also nice to see that Thor knew some of these god's and that seeing them dead upset him.

There was also an interesting thing learned in this issue, and that was that Thor has forgotten a lot of things over his life. This isn't deliberate, it's just that cause he's lived for so long he's had to forget things to make room for more recent memories. This makes total sense, as if you had lived for thousands of years it would be hard to remember everything. Okay the argument could have been made the other way, and that cause they're god's they remember everything that happens to them, but I think that this choice was better as it makes Thor look more human, but not any less of a god. It was also nice that Thor was upset with some of the things he'd forgotten, as he knew there was bound to have been people he loved that he no longer remembers, which appeared to upset/displease him the most. I like how both these things make Thor look more human, cause at the end of the day in most myths, or religions, human's are meant to be made in the images of god's, and if god's acted nothing like human's the notion wouldn't mean as much.

There was also an appearance from Iron Man in this issue. This is the second time Iron Man has appeared in a comic that he's not usually featured in this week, with Indestructible Hulk #2 being the other, but this is also the first issue of Thor: God of Thunder to feature another regular Marvel character. I like cameo's in comics, as it remind you that despite this being a unique series, with it's own stories, and goals, that it's still in the same universe as the other Marvel series'. I also liked that Iron Man's involvement was thought out, and that he wasn't just chucked in. Iron Man is in the comic to help Thor find the cave where he last battled Gorr, as he's forgotten where it is due to it happening over 1,000 years ago. I also liked that Thor eventually put his pride and stubbornness aside, and asked for more of Iron Man's help, telling him about Gorr, and if he could warn other Earth based god's.

Other reviews for Thor: God of Thunder #3 - The God Butcher, Part Three of Five: The Hall of the Lost

Even Thor Knows The Meaning Of Fear ! 0

well.....i'd like to start with the fact that i never really liked Thor, in fact , i at one time hated Thor, and as the i became neutral towards Thor i picked this up. Now the thing is, i was really skeptical about this, because Jason Aaron did poorly with his Incredible Hulk Run, but boy did this relaunch really blew my mind. This is one of my favorite marvel now titles, and there are many things that are great about this book. First of all, the thing that's stands out the most is Jason introdu...

Is it possible to keep gushing on about the epic mythological tone of Esad Ribic's artwork? From expansive lands and impossibly dark caves to the architecture of Gods and fallen dragons. Ribic is probably the all time perfect artist for Thor.And Jason Aaron is making sure he does the art justice as he continues his time spanning epic tale of a being that slays the very Gods themselves. The focus this time is centered around present day Thor, with a few very deep touches on the past and future, t... 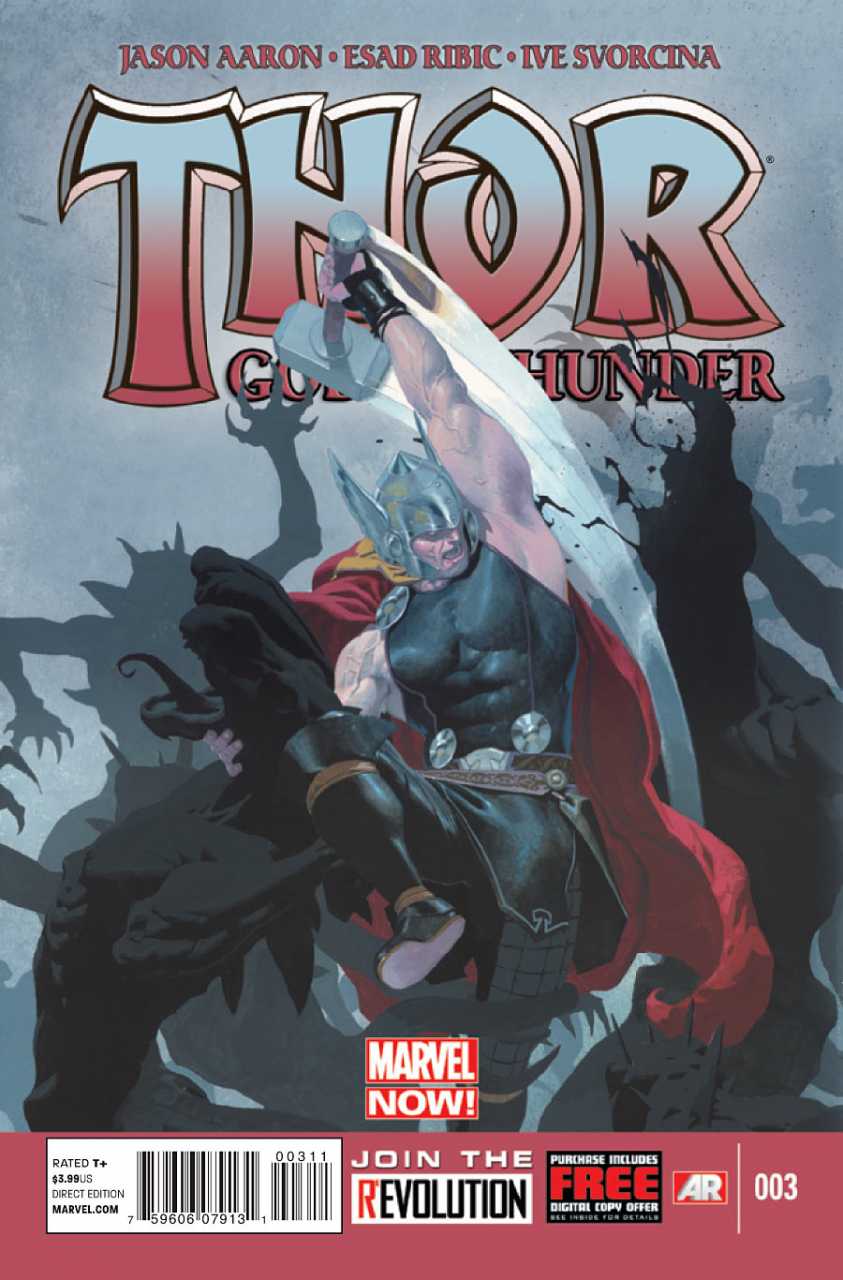 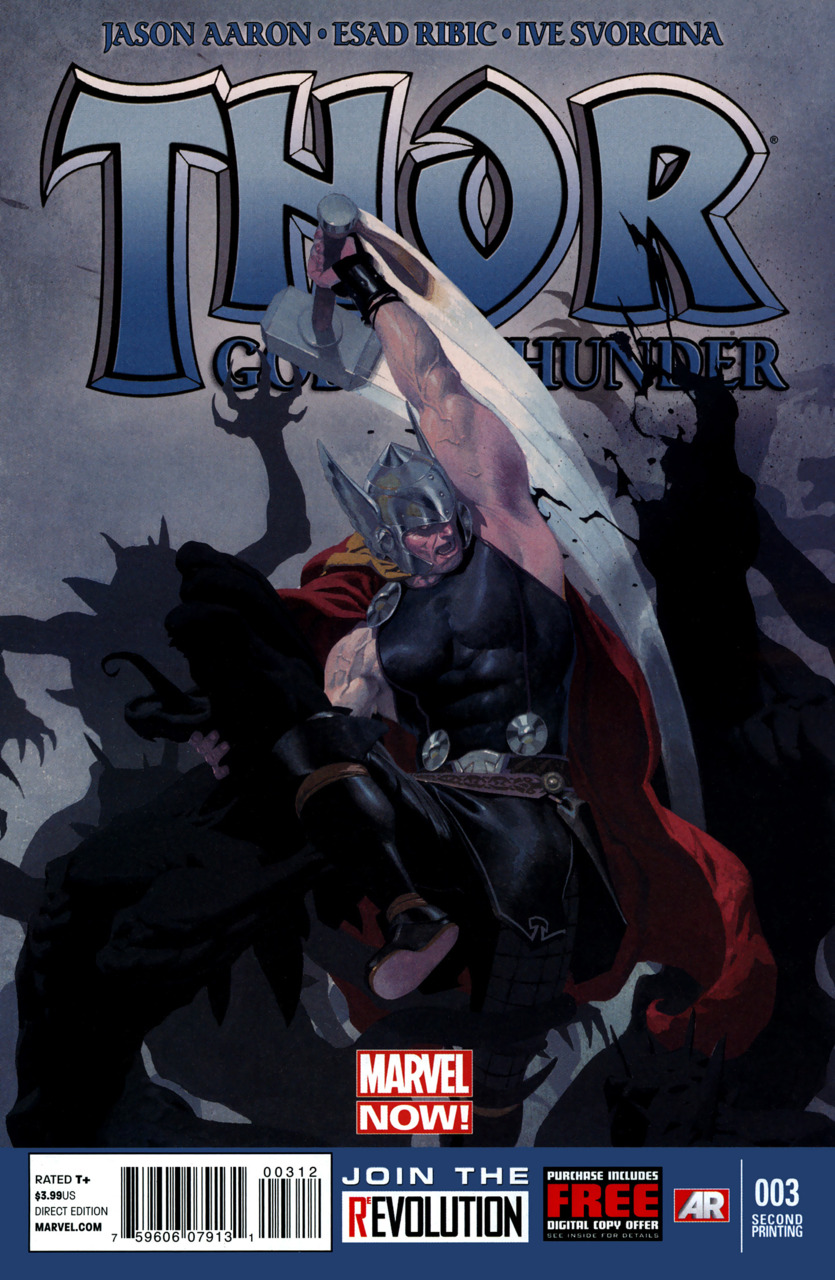 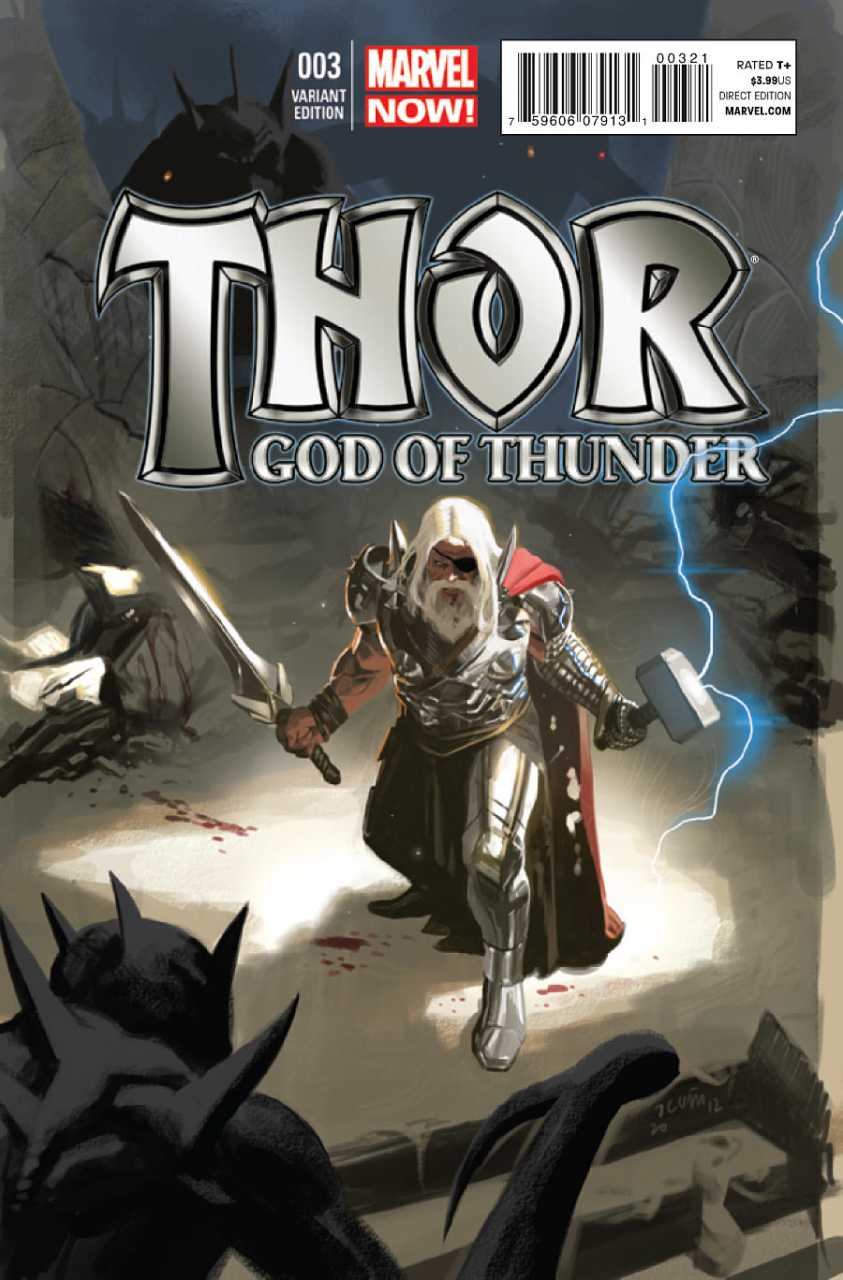