From The Longbox : The Spectre #1

In this issue, Jim Corrigan investigates his own death, after the police find his body in a steel drum covered in cement.

There is much that can be said about this nearly perfect book, for one you have to look at the fact that writer : John Ostrander knew that the secret to making a good Spectre book, was that at his core he had a former policeman Jim Corrigan.  He meets a police woman, who does not agree to some of the lengths he is willing to go to in the name of justice, but this just adds to the humanization of the character. Making us that much more invested.
Saying all that about the writing, one would have to mention Tom Mandrake, who is easily the best artist for this job. His use of shadow, and art style gives the city inhabited by the characters a somewhat timeless look to it. Like an old Gothic horror film, helped out more than just a smidge by Digital Chameleons work on the colors.  Like an episodic crime novel the story is done by the end of the book. Easily read, easily enjoyed. This is the perfect combination of story and art.

You have nice style in reviewing. Give a way a little but not enough to spoil a thing.

P.S. I love this cover, could it be all those bones? ahahha.

Edited By ENGLENTINE
Thank you for the compliment
10 years ago

Other reviews for The Spectre #1 - Crimes of Violence

Spectre leaves to AvengeI know very little about the Spectre but after reading about him in another book I thought I'd give him a try.  The Spectre is an occult character and administers horrific punishments.  It is for this reason that I was hesitant on the character and this issue.   Once I read the story I was pleasantly surprised.  As I read the book I was not bogged down with tons of exposition explaining everything that has happened with the character since day one and there wasn't an ove... 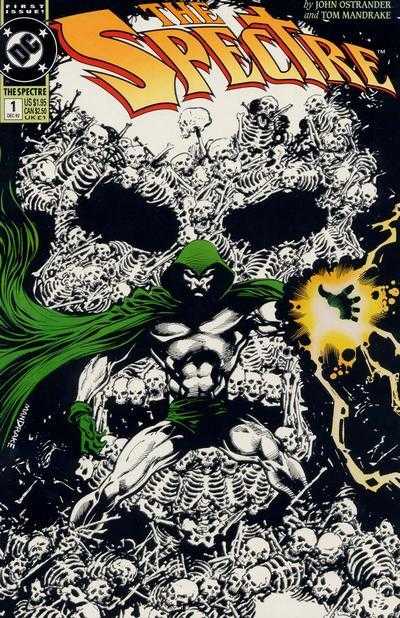