Picking up directly from where issue 4 left us, the group finally comes to some realizations that cause them to go from a group to a team. It's good to have the creative team of writer Howard Mackie with artist Ian Churchill again. I feel the stronger issues of the title so far have been the ones with both of them on board. This narrowly beat out Stormwatch as my favorite book this month.

Ravagers has been a fun title since it launched in Wave 2 but has had some distractions. We've had other artists on the book in such a short time and while they haven't been bad, they don't come close to Ian Churchill. His art is one of the reasons I enjoy this book so much. He does a great rendition of each character and in this issue, he gets to have a little fun as we see the kids in normal clothes instead of their superhero costumes. It's little details like this that always make me appreciate an artist more.

The zero issue last month basically just showed us the origin of Terra and Beast Boy since technically the "origin" of The Ravagers was revealed in The Culling crossover where the title sprang from. So while the zero issue was good, I was happy to get back on track here with the story. There's some interesting character moments as we see the group starting to realize why they must band together in order to survive. Even Superboy who guest stars gets a little revelation which I wonder if it'll be carried over into the "H'el on Earth" crossover happening in the Super titles.

Because the zero issue will be included in the trade, the first arc had to be wrapped up here. I kind of wish they would've had one more issue to focus on what they were setting up here because the ending seemed a little forced. Definitely a classic ending to a team book, but you could tell Mackie had to squeeze it in there for the trade.

Ravagers is such an under-rated book in my opinion. I've been having a lot of fun with it and it's got a great creative team. Mackie always has me wondering where we're going next and now that they team has survived their first arc, I'm anxious for the next one.

Other reviews for The Ravagers #5 - Game Changer

Ravagers #5 ReviewOverview:The team meets Niles Caulder and saves Thunder’s life.The Good:The team comes together here and it ties in with Superboy very nicely (SB #13 happens just before this). During the stay at Niles’ base the team learns why Thunder has headaches and what it means for the rest of them and the way the team becomes a team instead of a group of individuals is great, if not a little rushed. Ridge becomes a better character here and it kind of makes you wish he had a better name ...

The Psychotic Perspective: The Ravagers #5 0

Game ChangerThe first issue of Ravagers started out stronger than I would have ever guessed a series spinning out from “The Culling” ever could be. Despite a strong start though, Ravagers has slowly devolved into a series of somewhat interesting heroes fighting a series of uninteresting and inconsequential foes. Since issue two, I've been longing for the series to establish some sort of purpose for the team, yet so far, they have failed to do so. Does Ravagers finally get to the point in this is... 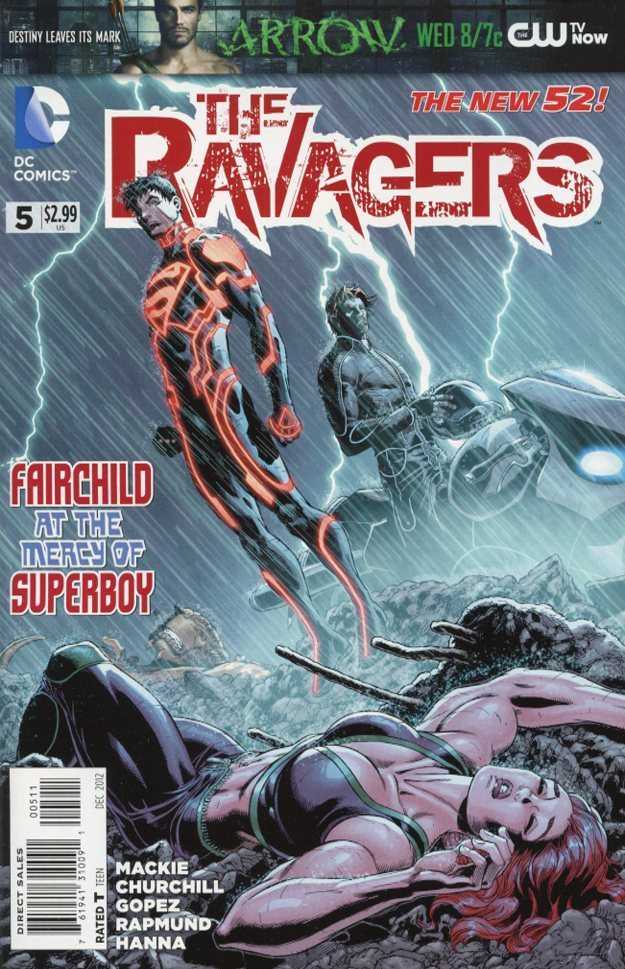