queso6p4's The Phantom Stranger #19 - Return To The Tomb Of The Ice Giants!/"The Voice Of Vengeance!"/Captive Of The Cat Curse review

Way back in issue 8 we first crossed path with the Ice Giants, and now, thanks to man's meddling (the Phantom Stranger even says so himself), we find ourselves at odds with them again.

At first, this almost seems like a random issue that revisits the setting of a previous one for some unknown reason, but it turns out to be a somewhat thought provoking book about mankind's impact on the environment. We come upon an expedition team that's running an oil pipeline through some part of the arctic circle. The first two poor saps we come across find a huge, inhumanly large sword embedded in part of the pipe. Sabotage! but by whom! Unluckily for them, they find out and are dispatched. So long, one-shot characters Frank and Milt.

As you might've guessed from the cover and plot synopsis, the Ice Giants are the saboteurs as they're none too happy with the pollution and overall negative impact that this pipeline has wrought on their world. They even have an ex geologist turned land surveyor named Anthony Blake who's on their side. Not only does he disagree with what Union Oil is doing, he's flipping angry about it and is not ashamed to express his feelings--with his fists. Naturally, this brings him to blows with Nick Stone, company blowhard. The Stranger intervenes and tries to help the two sides come to an understanding, but things don't end ideally for either side.

I'm typically very wary of environmental stories and the like as I'm afraid they'll be preachy. This issue didn't turn out that way and given how it ends I'm not sure if it's message was for or against conservation. Nonetheless, it was still a neat read. Despite the seriousness of the issue, there's one scene where the Stranger saves Blake's life. Here's their somewhat funny exchange:

This issue. My, my, my. It features one of my favorite, perhaps the favorite Phantom Stranger openings so far. I mean, look at him! The way the blackness of his cloak acts as a backdrop for the snow. Look how regal and powerful he looks standing in front the mountains, his hand and narrative addressing the reader.

This book also features my, to date, favorite page layout (not pictured). I don't know why I love it so much but the panels come together so awesomely, at least in my opinion. Things do seem to get a little muddy because of all the snow that's featured in this issue but Aparo's work is still pretty good.

Another solid, standup issue in the Phantom Stranger's history. I'm not crazy about this issue but I do like it. 3/5. Thank you all for reading and take care! Also, I hate that the pictures aren't large enough for me to post under as having text on the side is distracting to me. I took a picture of my favorite page with my cell and have included it in the end as to avoid dealing with the "side text" annoyance. What do you all think?

Other reviews for The Phantom Stranger #19 - Return To The Tomb Of The Ice Giants!/"The Voice Of Vengeance!"/Captive Of The Cat Curse 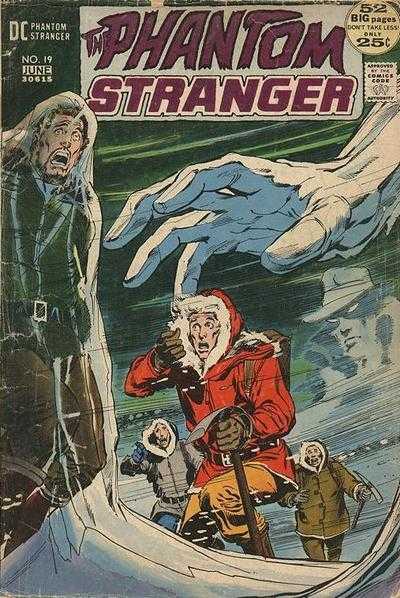