Well, first off I'd like to address the elephant in the room-namely how culturally insensitive the cover is. While addressing such stereotypical attitudes in comics is enough to consume volumes of books, the story itself is actually pretty thoughtful and offers an interesting take on cross cultural perceptions. That being said, the Stranger's opening blurb is a bit more than problematic. These are scans from my copy of the comic so I apologize for the quality and cropping in advance.

We follow the cyberneticist (who even know those existed?) John Kweli, as he travels home to an unspecified country in Africa. On the way back, his train derails for some unknown reason, and he is saved by, you guessed it, The Phantom Stranger. He awakens in the home of an old friend of his named Ororo, and after a little catching up, they head back to his village. After arriving, he sees some government soldiers rounding up some of the local men and Ororo later reveals that said government is trying to pressure their people into giving up the land as it is a huge source of oil. John confronts the government representative to no avail, and decides the only way to help his people resist is to literally make a figure for them to rally behind. Using his skills and knowledge he crafts an avatar of the warrior god Chuma and this does the trick. The moral and practical implications of his actions play out in the rest of the issue, especially when Chuma develops a personality of his own and falls in love with Ororo, forming a weird love triangle. As is more customary for the Stranger, he only shows up a handful of time for the rest of the story after rescuing John from the train accident.

By now, it should come as no surprise that the credited art is done by Jim Aparo, who continues to do a pretty good job. What's a little different here than in other P.S. issues is that we get a kind of montage panel which illustrates how Chuma galvanizes his people and it has a very washed out look to it. It almost comes across as a flashback of sorts but does a good job of giving the reader a different sense of art to focus on, if only for a moment.

On a personal note, this issue features one of the more puzzling page/panel layouts that I've seen in a P.S. comic. I like it, but it comes of as a little strange to me. I love how the Stranger is placed, but is he disappointed, sad? I just don't know. This also echoes his breaking the fourth wall nature so that's a nice touch.

Overall, I find this story to be okay because even given its stereotypical take on Africa it does tackle interesting and realistic implications of international policies, i.e. how much, if at all, should outsiders interfere with others' matters. On a more personal note for John, it does touch on the conflict that his western education and perceived abandonment of his people comes into play when he returns home, and this works quite well with his creation of Chuma. Also, although not touched upon in the story section, it also deals with the issue of man playing god and the Stranger's opinion on the matter is as enigmatic as ever. Final score: 3/5. Thank you for reading!

Other reviews for The Phantom Stranger #15 - "The Iron Messiah!"/I Battled For The Doom Stone/Satan's Sextet/"I Scout Earth's Strangest Secrets!" 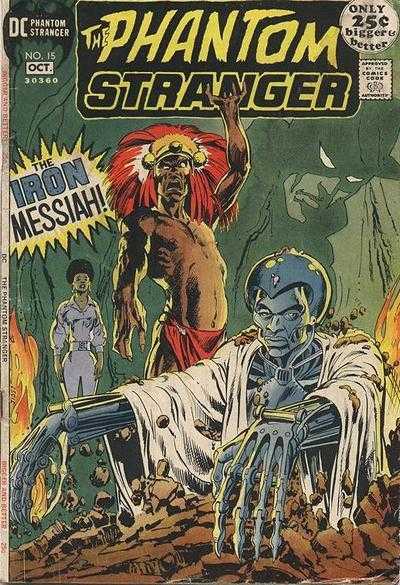