queso6p4's The Phantom Stranger #14 - "The Man With No Heart!"/The Spectre Of The Stalking Swamp! review

Retro Review 1: Who knew he had it in him?

If you've been unfortunate enough to brave my more recent reviews I open with often times random thoughts and what have you that hopefully have relevance to the issue being reviewed. In this case, it seems like only yesterday that I walked into the library, randomly grabbed Showcase Presents: The Phantom Stranger off the shelf, delved into it, and was immediately smitten with the character. While reading this, he quickly rose to be one of my favorite characters. Sooo, I have a huge bias (read love) for/towards the Phantom Stranger. *AHem* Onto the review!

Depending on your level of familiarity with The Stranger, you may or may not know that he tends to guide heroes towards a better path rather than directly intervene in matters, but in this issue, we see him do something that's atypical. He basically stalks a guy (a villainous one, of course) for the whole story. Here's how it went down: The Stranger shows up at the one-shot villains house and confronts him, only to be subdued by said villain's sorcery. As it turns out, he has a failing heart and thinks that his best bet at survival is to take the Phantom Stranger's heart as his own! He does, so, but only for a spell before the stress of what he's done gets to him. He starts to hallucinate that the Stranger is stalking him and that's where I'll stop. If you wanna know the highlights just message me and I'll tell you. I love how you can't see the Stranger's eyes in the second panel as it makes him seem that much more intimidating.

Apart from the Stranger's atypical behavior, this issue is also neat in that it reminds the reader, albeit in a fittingly enigmatic way, that The Stranger does have limits and weaknesses. He's taken out really easily, I might add, but it's what he does after the aforementioned surgery, that, coupled with his weakness, that makes this issue stand out. It just makes him that much more mysterious.

Jim Aparo did some amazing work on the 70's PS books and this one is no exception. When I first read the reprints of these, they were in black and white so I did what any obsessed (read normal) comic fan would do and hunted down the back issues so I could more fully enjoy them. There's a scene towards the end of the story where we're looking up at the Stranger as he's eerily standing, almost towering, above the villain, and there's lighting flashing in the stormy clouds behind him. It's a really powerful panel that's almost more outstanding in black and white. The whole mood of this story is dark, foreboding, and even a little dismal, and the colors do a great job in helping to convey this.

. The ones I used are from my own copies so please bear with me as I try to get the hang of this. :-)

While I, once again, shamelessly acknowledge my love of the Stranger and of a lot of Wein and Aparo's run on the character, this issue is my favorite so far because of it's departure from the usual role he plays. The art is the major hero here, really amps up the atmosphere, and even manages to make the Phantom Stranger come off as threatening. It's creepily fun from start to finish and the last panel really seals the deal. If you can find this issue, definitely read it. 5/5. Thank you all for reading and any comments and recommendations are always welcome!

Other reviews for The Phantom Stranger #14 - "The Man With No Heart!"/The Spectre Of The Stalking Swamp! 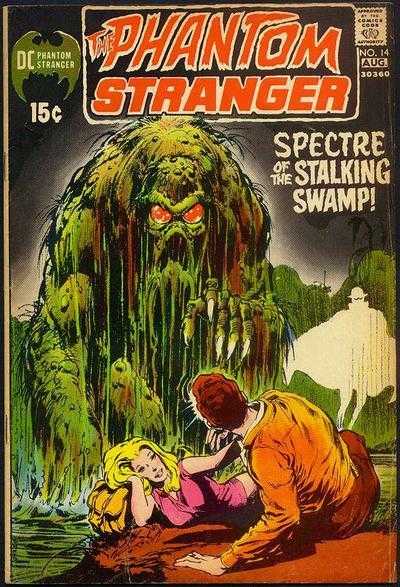