ajshadowhawk's The Flash Annual #2 - The Quick and the Green; Details review

I loved this issue!

An episode of Superman: The Animated Series, in which Superman and Flash have a race around the world to determine who is the fastest among them, was where I first met the character, having had no prior knowledge of him. Then I met him in the Justice League: The Animated Series and Justice League Unlimited shows and I pretty much fell in love with the character. Wally West made for an excellent foil for pretty much everyone else on the team and his dynamic with the others was one of the best things that the shows did. Much as John Stewart is THE Green Lantern for me, so is Wally West THE Flash for me.

This is why I was rather saddened that there was no Wally West in the New 52 reboot of DC Comics. I was further saddened to hear that Wally West was being considered a “toxic” character at DC editorial. C’est la vie. Still, I was willing to give the “new” Flash a chance and I picked up Francis Manapul’s first three issues of the new series last year. However, they didn’t work for me since I just wasn’t able to get into the story and the character. And I gave up on the book after that, preferring to read about Barry as things happened in Geoff Johns’ Justice League.

But then fellow TFF reviewer Bane of Kings started to praise The Flash, especially the recent issues, and I thought, might as well try it. Seeing that a relatively stand-alone annual issue was coming up, I included it in my “Top DC Comics For July” post, expecting some great things out of it, since it had a different writer than Manapul.

And you know what, I loved this issue!

In Geoff Johns’ Justice League #1 we saw that Hal and Barry knew each other and that they were effectively a two-man superhero team. It was a really interesting dynamic, especially given how natural their relationship was portrayed. What Buccellato has done with this issue is show how the two heroes first met and the consequences of that meeting. It made for a great change of pace from everything else that’s been happening in DC comics right now, lots of death and mayhem and darkness and grimgrimgrim and seriousness. A GREAT change of pace, and that has a LOT to do with the inherent nature of these two heroes.

Even though both Hal and Barry are quite different from each other, in terms of what kind of heroes they are, they are also very similar. And a lot of that has to do with their attitudes.

I’m a fan of Geoff Johns’ Hal Jordan, whether we are talking about his reboot of the character in Green Lantern: Rebirth or his 20-issue run on the character in the New 52, and Buccellato drew me into his version of Hal in a heartbeat. He doesn’t waste any time establishing who Hal is, what kind of a guy he is, and so on. He does it in quick couple of panels through dialogue and actions, no random exposition, if that makes sense. His Hal is the Hal that I’ve been reading about for more than a year now, the Hal that I enjoy and love.

With Barry, I don’t know much about the character and he is effectively a blank slate for me (outside of Crisis on Infinite Earths), and I barely got to know him from the first three issues last year so its not exactly like I really can connect with him. But Buccellato got me to connect. It felt like I knew who this character was, and that was a great feeling. There was no feeling of alienation from the character at all.

And best of all, the camaraderie between Barry and Hal is plain excellent. It is easy, it is relaxed, and it is full of good-natured banter. As if the two are long-time friends. This is how I kind of imagine the friendship between Superman and Batman to be, except, with a lot less subtle snark from Bruce and a lot less “boy scout” enthusiasm from Clark. I keep hearing, ever since this issue dropped, that there totally should be a The Flash/Green Lantern ongoing, written by Buccellato. Well, if DC does decide to do that, then I’m sure as hell going to be in on that one. Quite frankly, I would love for there to be more exposure to DC characters who are NOT Batman or Superman.

And come on, the entire dynamic between Barry and Hal is a perfect setup for such a book. I hope that DC at least explores the idea. It would be good. I’d market the hell out of it if they do it.

The backup story, by Nicole Dubuc, was quite an interesting tale in its own right. It deals with the classic superhero trope of “what if the hero can’t save everyone”? The way Dubuc treats the story was a bit odd, since she wrote it to be very… instructive and philosophical, and I’m not sure if that worked out well in the end, but I liked the concept of it. What’s weird is that after reading the annual I was doing some wikipedia info-download on Wally West and I came across a bit of a fact: the story that Dubuc tells here is pretty much the same story done a couple decades before with Wally. I’m not sure what DC is trying to do here, whether they want to retcon Wally out of his own stories or not, and this confused me. Dubuc’s story is certainly well-written, but this… revelation throws a spanner in the works, sort of.

Regardless, what I will say is that this was definitely a great annual and that I look forward to many more from Buccellato and team.

Speaking of the art, Sam Basri did the pencils and inks here while Stellar Labs did the colours and Taylor Esposito did the letters. I’ll say that Basri’s art is a huge reason why I loved this book so much. Like the heroes of the script, the pencils are plain fantastic. All clean lines, with characters who are expressive with both their faces and their body language, and who all have a consistent look from panel to panel with little to no deviation of any kind. And the colours fit the moods and attitudes of the heroes as well. Bold, bright, and soft. A perfect mix of talent here. The entire page where Barry gets the power ring from Hal, was a highlight especially. Both through the script and the art, it is conveyed just how Barry accesses the Speed Force and how having a power ring changes him.

For the backup, Cully Hamner did the artwork, while Matthew Wilson did the colours and Carlos M. Mangual did the letters. Tonally, the backup is completely different, since it is much more rugged, hard-angled and full of shading. Not sure if I’m a fan of it all that much, but it was certainly good enough and Hamner and Wilson do leave their mark.

Other reviews for The Flash Annual #2 - The Quick and the Green; Details

Even for annuals, I haven't been impressed much with DC's New 52 annuals, but as a longtime fan of both Barry Allen and Hal Jordan I had to pick this one up. It might be missing Manapul's art, but the I enjoyed the banter between GL and the Flash quite a bit as we get a flashback to their first meeting as well as their latest adventure that gets them pulled back to Arena World. The idea of how the Flash was able to use super-speed to learn how to use the ring as well as how much the force of wil...

Even for annuals, I haven't been impressed much with DC's New 52 annuals, but as a longtime fan of both Barry Allen and Hal Jordan I had to pick this one up. It might be missing Manapul's art, but the I enjoyed the banter between GL and the Flash quite a bit as we get a flashback to their first meeting as well as their latest adventure that gets them pulled back to Arena World. The idea of how the Flash was able to use super-speed to learn how to use the ring as well as how much the force of wil... 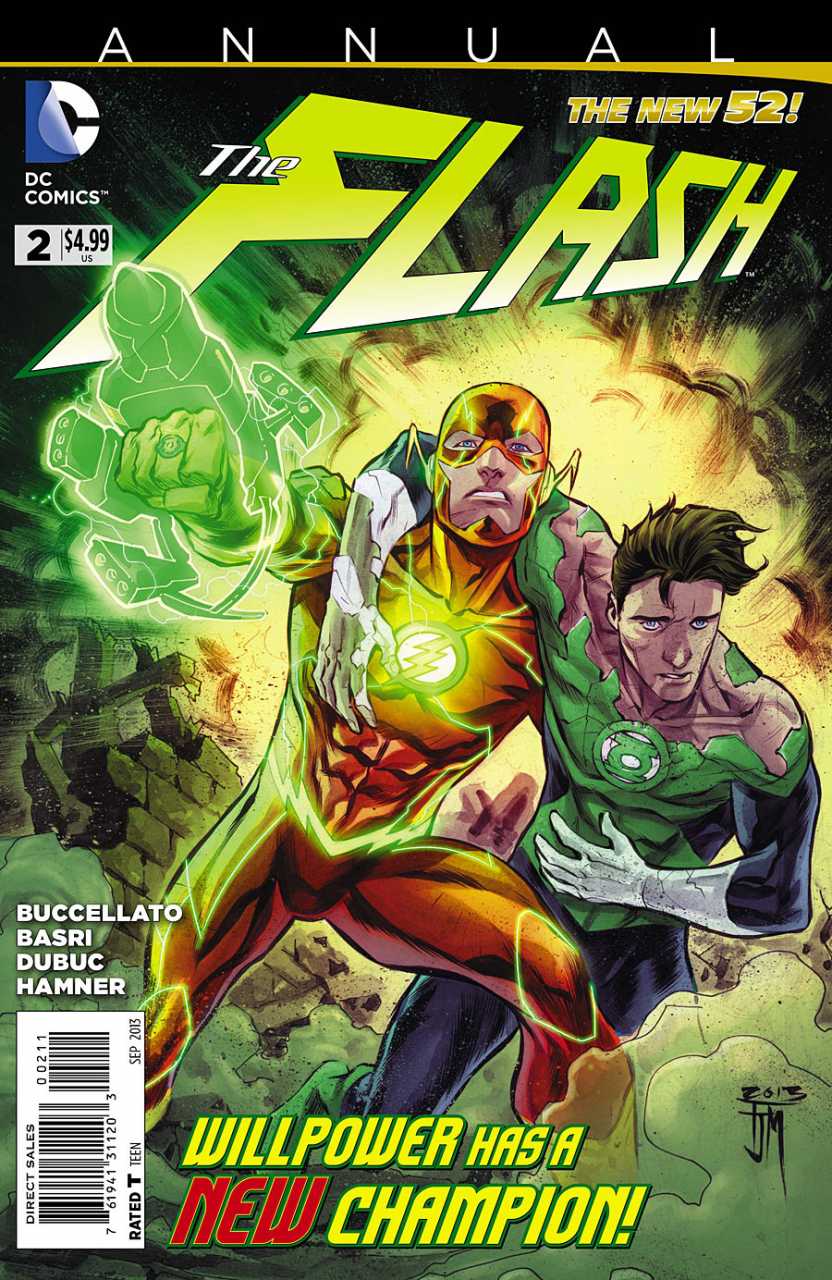