There's something about being an Avenger...

Vengeance is Ours by Stan Lee and Don Heck stars the Avengers as they induct Swordsman as a new member into the team and are targeted by Iron Man's enemy the Mandarin.

In the traditional Silver Age style, the cliffhanger of the last issue of Avengers is quickly resolved with the Avengers freeing Captain America quickly and Swordsman escaping from them. As the Avengers bicker amongst themselves about who should lead the team, Swordsman is abducted by the Mandarin and attempts to fight the villain before being thoroughly beaten by his magic rings.

Back at the Avengers Mansion, the Avengers receive a message apparently from Iron Man telling them that he personally vouches for Swordsman and Captain America and co. should welcome him onto the team. They do so but remain suspicious of their new member. One night, Swordsman learns that Mandarin plans to kill the Avengers and leaps into action to save the Avengers but his team-mates misunderstand and think he is responsible for the attempt on their lives. Shunned and expelled by the Avengers, and now targetted by the Mandarin, Swordsman is left alone to ponder to himself how he wishes things had worked out differently.

I pointed out last issue that the story is a bit too similar to the first Wonder Man story with a villain joining the Avengers and here it only solidifies the comparison with the villain instead siding with the Avengers and saving them. The real problem with this issue, however, is the pacing. While Silver Age pacing is frequently criticized by the current generation of readers, it does have a tendency to be troublesome in it's compression. More of this issue is spent with Hawkeye and Quicksilver bickering and Swordsman's confrontation with the Mandarin. The result is virtually everything from Swordsman being welcomed onto the team and the end of the tale is condensed to 4 or 5 pages.

But as a story, there's is a fairly formulaic and almost hallmark tale starring Earth's Mightiest Heroes. While it is disappointing in it's pace and never giving us a single glimpse at Swordsman with the Avengers, it's still pretty readable in spite of it's flaws.

Other reviews for The Avengers #20 - Vengeance is Ours

The Difference A Good Inker Makes! 0

The Avengers still seem gullible enough for any trap one of their enemies dreams up. This time, the Mandarin, posing as Iron Man, convinces them to accept the Swordsman (yes, the guy who tried to kill Captain America last issue) onto the team.So just in case you’re keeping track at home, that’s a five member team, four of whom used to be supervillains.Wanda’s hex power continues to be way too powerful and ill defined.But, what a difference an inker can make! Apparently I wasn’t the only one that... 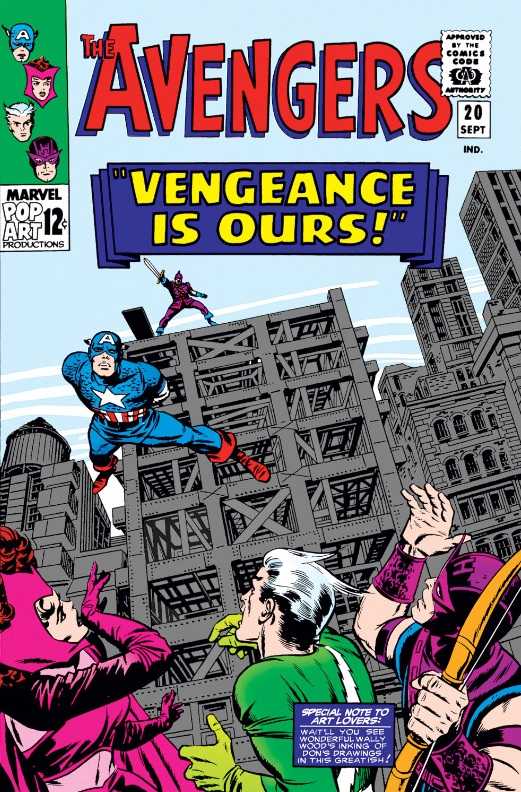