I have been a huge Spider-Man fan all my life, and I have been extremely excited reading this series as issue 700 draws near. I wasn't to sure what to think about this issue when I first heard about it but after seeing the preview I was very interested.

This issue shows how Morbius escapes the Raft, and then tells his story of how he became the Living Vampire whilst trying to cure an illness.

WARNING: SPIDER-MAN DOESN'T MAKE A PROPER APPEARANCE, THIS IS A MORBIUS ISSUE!

This was a good issue, and was very different than I thought it would be. Although I liked seeing a retelling of Morbius' origin, and it does make sense seems it's setting up the Morbius ongoing series, but I'd rather have something more to tease issue 700. Joe Keatinge and Dan Slott did a good job writing this issue. I assume that Keatinge would have done most of the writing due to him being the writer on the upcoming Morbius: The Living Vampire series, with Dan Slott either writing the small set-up to 700, or helping with it. Overall this was a good retelling of Morbius' origin, and I'm happy as he's one of my favourite Spider-Man villains. I also liked how Keatinge made me feel slightly sorry for Morbius in this issue, and how he showed his desperation prior to becoming a vampire. The main thing I disliked about this issue was that I liked it. Don't get me wrong this isn't actually a bad thing, it's just that I wasn't planing on getting the Morbius ongoing series, but after reading this I want to, and will need to think if I am.

The art was very good in this issue but I was disappointed that Marco Checchetto couldn't do the whole issue. This isn't anything against Valentine De Landro's art, which is very good in it's own right, it's just that since reading the most recent Punisher ongoing series I have really grew to appreciate Checchetto's art and love seeing it. Before I get onto talking about the main art I will continue by saying that Checchetto did a brilliant job of drawing the escape sequence at the start of this issue and I'd be happy if he drew a Spider-Man comic again. De Landro did however do an amazing job on the main story, set a brilliant tone. Although I've seen more detail in other artists work I don't think I've seen as much emotion. You can see what Morbius is feeling in this issue easily, whether it's happiness, sadness or regret, and I thank De Landro for that.

The escape from the Raft was a very good sequence, and I actually preferred it this time than in issue 699. The art for one was much better this time around, and although I like Humberto Ramos's art in the last issue, and previous issues, Checchetto did a much better job, making it look more realistic, especially Doctor Octopus. Besides that the tone in this sequence was amazing, and I loved how you couldn't tell whether Morbius was happy or sad to be free, looking very confused. The interaction between Morbius and Lizard in this sequence was also very interesting as they both played a huge role in the No Turning Back story, and Lizards words were what set Morbius off on this train of thought.

Morbius and Emil's friendship in this issue was probably the most interesting thing in the issue. Although it did drag on a little near the end I liked how they were friends since childhood, and that Emil dedicated his life to helping cure Morbius ever since he caused a bad accident whilst Morbius was a child. It was also interesting to see a younger, innocent Morbius, and after reading this issue I felt very sorry for him. Okay he has done terrible things since becoming a vampire, but the desperation as his illness worsened was slightly moving. It also made him taking the serum too early even more understandable.

The sequence when Morbius turned into the vampire was brilliant and the way he turned on his best friend due to the blood-lust was very dramatic. After finding out this was an origin story for Morbius it was obvious we'd see him turn into the vampire during it. The art was what probably made this sequence as good as it was and the look of regret on Morbius' face once killing his best friend was very well done. The shock on Emil's face before this was also very well done, but due to him not knowing what his friend was up to I question why he had a look of fear, and horror on his face, as most friends would probably laugh thinking they were playing a prank, or be annoyed due to being grabbed as hard.

This was a good issue, but it maybe would have been better to have shown Morbius escape the Raft at the end of 699, or the start of 700, and have a point one issue for the Morbius ongoing series to tell his origin. Other than that this was a very good issue, and I would highly recommend it to anyone who's a fan of Morbius, but will warn that it doesn't really connect much with the upcoming 700th issue.

Other reviews for The Amazing Spider-Man #699.1 - Enter: Morbius - The Living Vampire

Cover/Solicit - 4/5- Would I pick-up the comic based on the solicit/cover alone? Are the alternate covers appealing? Does the solicit/cover portray what happens in the issue?Art - 4/5- Do I personally like this artist's style? Does the artist stay true to the characters appearance?Colors/Ink/Lettering - 5/5- Does the work blend well with the artist? Is the coloring/inking enjoyable and easy to distinguish what's happening? Can I easily read the lettering?Layout/Flow - 5/5- Does the layout of the... 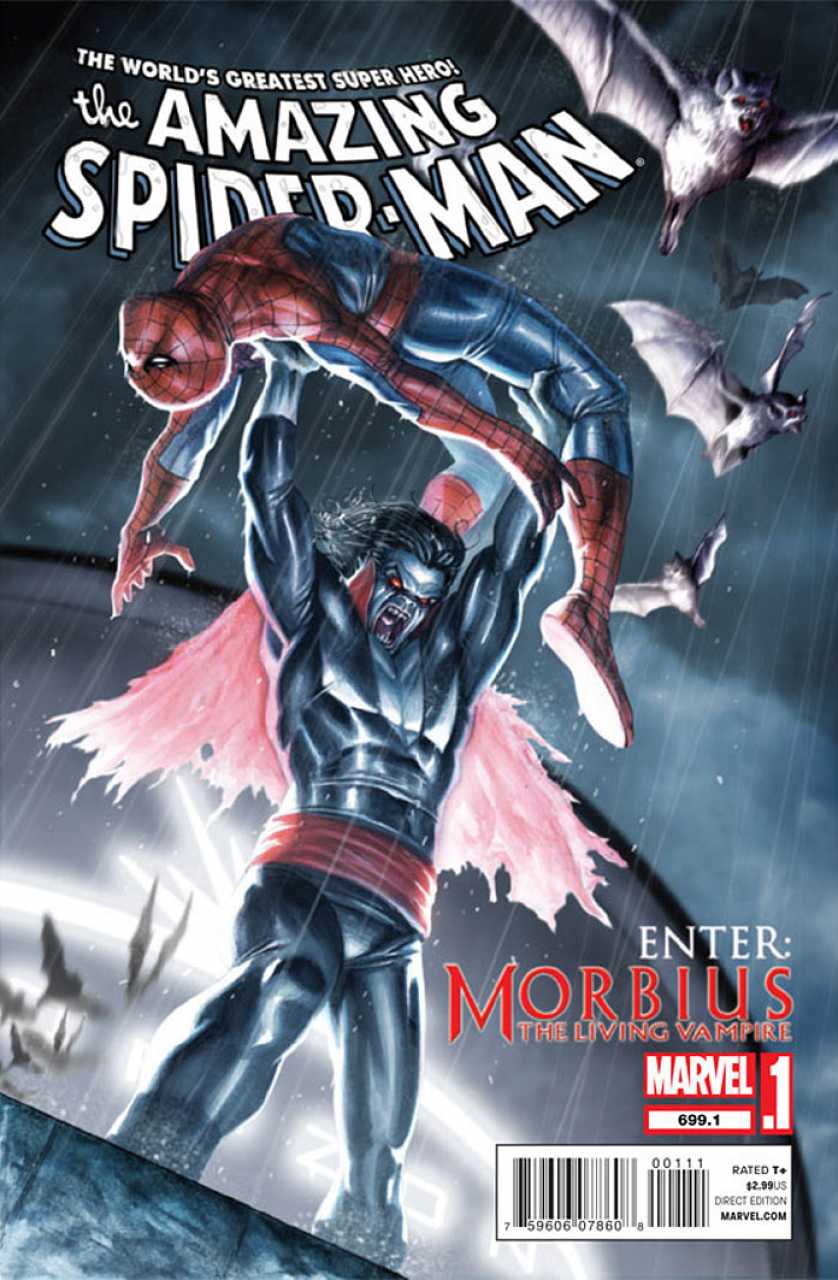 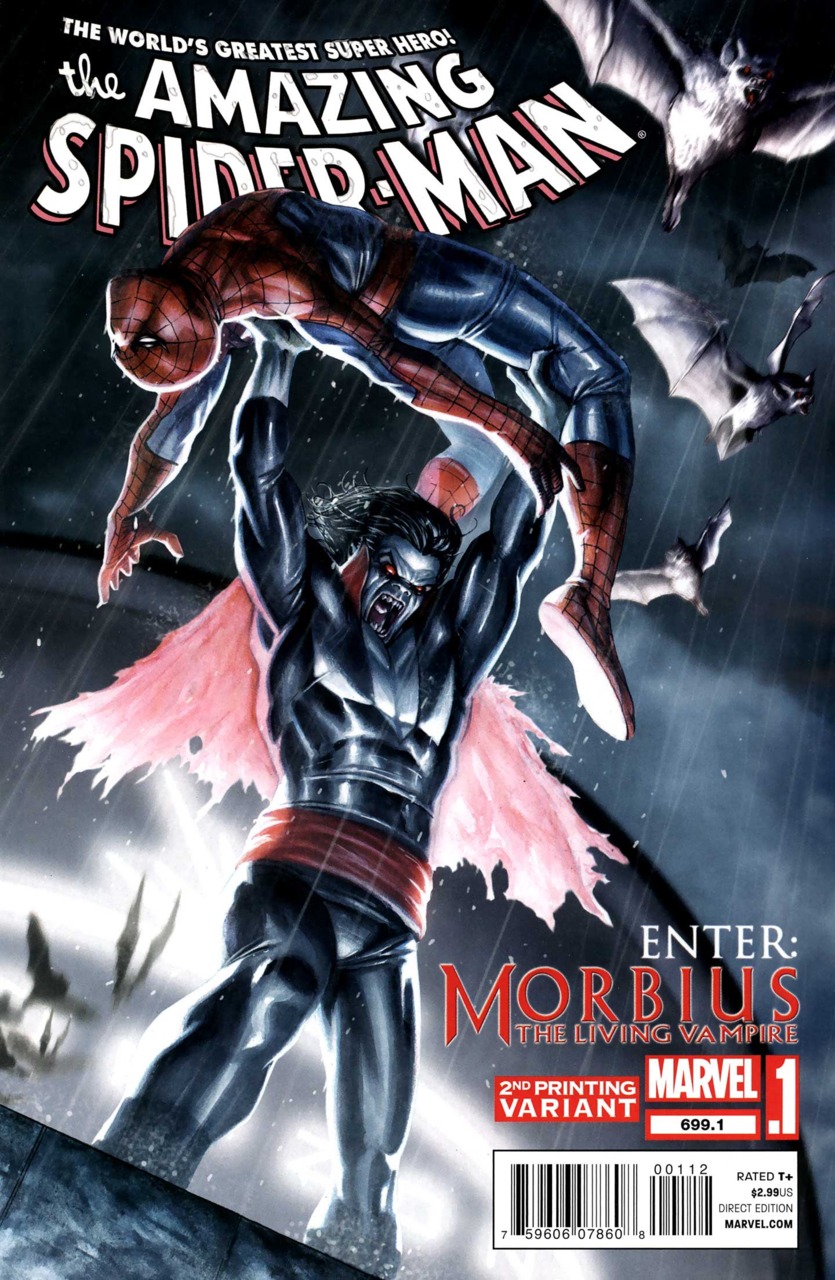