The newscasters who have been following and reporting on the upcoming Mayoral Election break the story that Spider-Man has been arrested, and issue some commentary on how this will affect the polling for Hollister, as they expect a major upturn in support for the candidate as a result.

Meanwhile, Spider-Man, in full restraints, is brought in to the 5th Precinct of the NYPD.

Carlie continues her confrontation with Vin and his partner about their role in the Spider-Tracer conspiracy, as she learns more about just how big it is, and how dangerous it could be. The two officers leave the apartment, leaving Carlie alone, worried and scared, and Vin unsure just what will happen now.

Palone tries to question Spider-Man, but he shoots back innane chatter, which just infuriates Palone, as he tries to take off Spider-Man's mask. However, before he can, Matt Murdock bursts into the holding cell, and tells Palone to get his hands off of his client. Murdock tells Spider-Man to wait this out, and that he'll get him out of jail legally.

In Palone's office, Carlie tells him about the secret behind the Spider-Tracer conspiracy, and when he asks why she would rat out fellow cops, she replies that she "became a cop to punish people who break the law."

Back in prison, Spider-Man is given a fresh costume for his upcoming hearing by a kindly prison guard who owes Spider-Man for once saving his life, which meant a lot to him and his family, which includes two young girls. He thanks Spider-Man, and wishes him luck in court.

Spider-Man enters a plea of not guilty, as the newscasters report on the story. There is then a narration box directing readers to read a short online story at www.marvel.com, the Spartacus Gambit, which depicts that which comes next in the story, but that which was also recently included in Amazing Spider- Man Extra #2, so don't feel put-out by the directing readers to the online version of the story and not stating that it was already previously included in one of the Amazing Spider-Man Extra specials.

Lily and Bill Hollister pour over the new election polling data, as Spider- Man's arrest has led to an unnatural spike which Lily calls the spider-bump, which shows Hollister now posting a commanding lead over Randall Crowne, his opponent.

In the squad car, O'Neil and Gonzalez talk about what happened back at the apartment with Carlie, when Palone calls for O'Neil, and makes him go off- speaker. The two have a quick conversation, and afterwards O'Neil has Vin pull over and tells him that warrants have been issued for his arrest as well as Carlie's. O'Neil reveals that Palone is twitchy about the issue because it was him (or at least it is heavily implied that it was Palone) who killed the Bookie, when the Bookie figured out the truth behind the Spider-tracer killings. As Vin pulls over, O'Neil, and a squad of officers, arrest him for criminal conspiracy.

Spider-Man is led back into his cell, and just before he goes in, he sees Vin being ushered through general population, in cuffs. Spidey gets Murdock in, and tells him that now circumstances have changed, as he's worried about Vin being put in general population, and how he might be treated or harmed by the inmates. The next day, Election Day, at the trial Spider-Man is ruled to be allowed to keep his mask on, and derails the trial. Matt Murdock leaves a law book for Spider-Man, and within, he finds a web-shooter.

Norman Osborn checks on his storage room that Lily and Harry have recently pilfered, and does a quick inventory of missing items, and realizes that either Harry has become bolder, or perhaps he was wrong about who was taking the supplies and equipment.

On Ryker's Island, Vin is violently beaten and assaulted in general population, so Spider-Man does what it takes to violently and desperately break out of his restraints, and drops down into the middle of general population and prepares to take on all of the thugs so that he can take them all on and save Vin from certain death!

Other reviews for The Amazing Spider-Man #587 - Character Assassination, Part 3

To start I am a huge Spider man fan, I have been enjoying the ASM ever since i got back into the title back when New Ways To Die, which i highly suggest you read if you have not already. anyways i felt that the tension from where the last issue left off really fizzed out in this issue. Now get me wrong, i love what the current writers have been doing, likewise John Romita Jr.'s art has grown on me as well, but to tell you the truth i just wasn't feeling it in this issue. I mean it just felt like...

Captain Codebro and The Blacklight ASM 587 0

Here is what we thought of The new ASM. Spoiler galore, so don't click play unless you've read it. Keep an eye out for the up and coming reviews.   ... 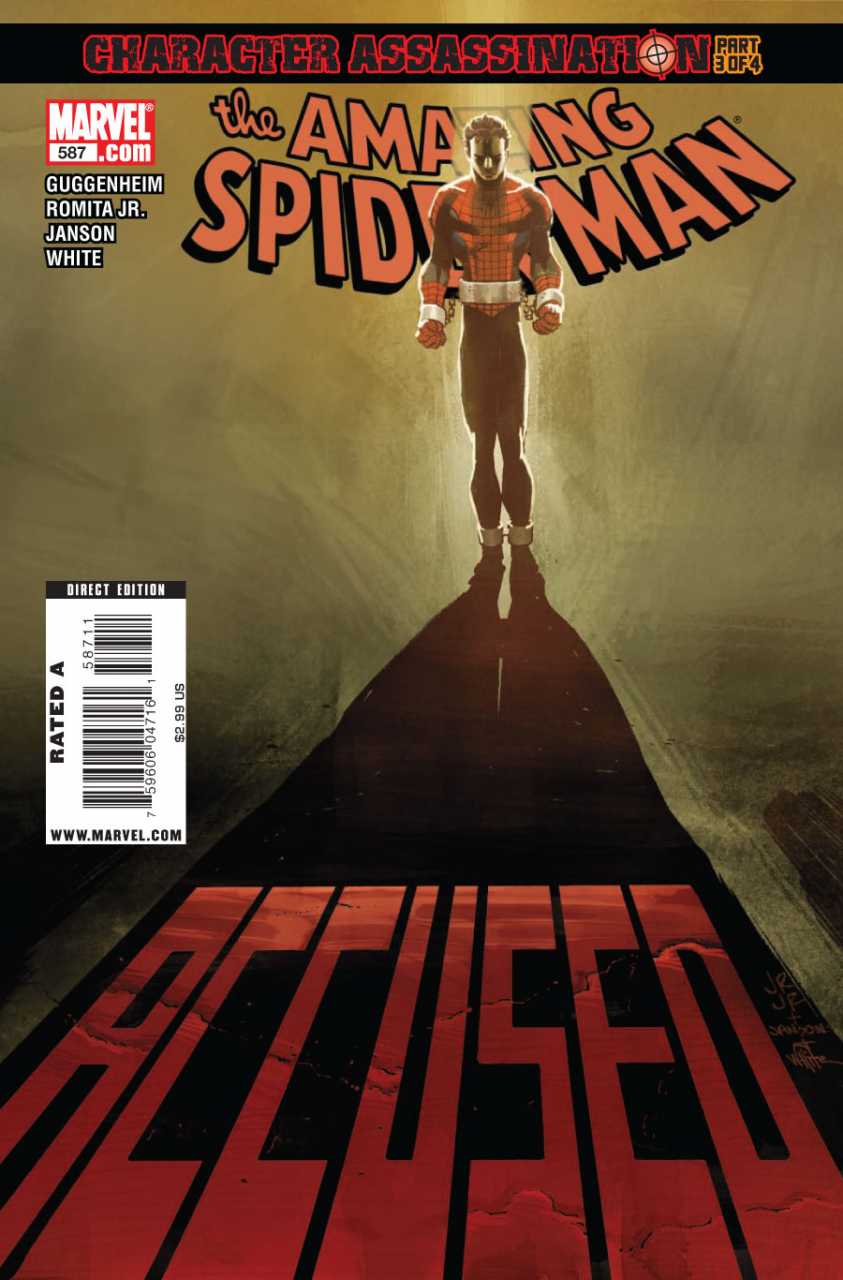