As newscasters recap the most recent political events and commentary on the upcoming mayoral election of New York City, Harry Osborn and Lily Hollister are on the Statue of Liberty, discussing his proposal. The conversation doesn't go well, as Lily isn't sure if it's too soon, and if he's ready considering his track records in the past. He's put off, hurt, and when her father calls her, she quickly bails, leaving Harry in the shadow of his past as the Goblin, or is it something more...

Meanwhile, back at the Gonzalez and Parker residence, Vin finds Carlie in his room, and wonders just why she's there, as he's returned for something he left in his room before leaving for his shift. She hid the bag of tracers, and is clearly very suspicious. As they're talking, Peter hears them mention that Menace is hitting a Hollister rally, so Peter, a bloody mess in the bathroom, scrambles to put back on his tattered costume, to go out and stop Menace.

Carlie is angry at Vin for keeping things from her, and confronts him about being the Spider-Tracer killer, due to the tracers in his apartment. She does this just as Vin's partner comes into the apartment.

As J. Jonah Jameson goes on tv to deliver some commentary on Spider-Man being crazy, Spidey swings into battle against Menace, but because he's already dealing with a recent gunshot from last issue, and hasn't had sufficient time to heal or get adequate treatment, he's sluggish and in bad shape, as he takes a beating. As he narrowly manages to save some lives, he ends up beneath a lot of wreckage.

Back at the Gonzalez/Parker residence, Carlie continues her accusations, as Vin's partner reveals that there's not just Vin involved in the spider-tracer conspiracy, but more cops, much to her shock.

Menace lays into Spider-Man, grabbing metal piping and wrapping him up in it, immobilizing him, as he weakly tries to fight back, but the gunshot and the successive beating and damage does its toll on him. Menace knocks him out and leaves him for the cops to pick him up and arrest him, and flies away. The cops quickly move in and get him strung up in holding gear, and announce that he is now officially under arrest.

Menace returns to Campaign Headquarters for Hollister for New York, and starts to undergo a physical change. Around the corner, five minutes later, Harry Osborn comes walking through the headquarters, opens the door to the room, and finds Lily Hollister inside, in the Menace costume and with the Menace Gauntlets on.

Other reviews for The Amazing Spider-Man #585 - Character Assassination, Part 2

Still hate Brand New Day? Get over it already. 0

The Amazing Spider-Man #585 - Character Assassination, Part 2 by gmanfromheck on February 12, 2009 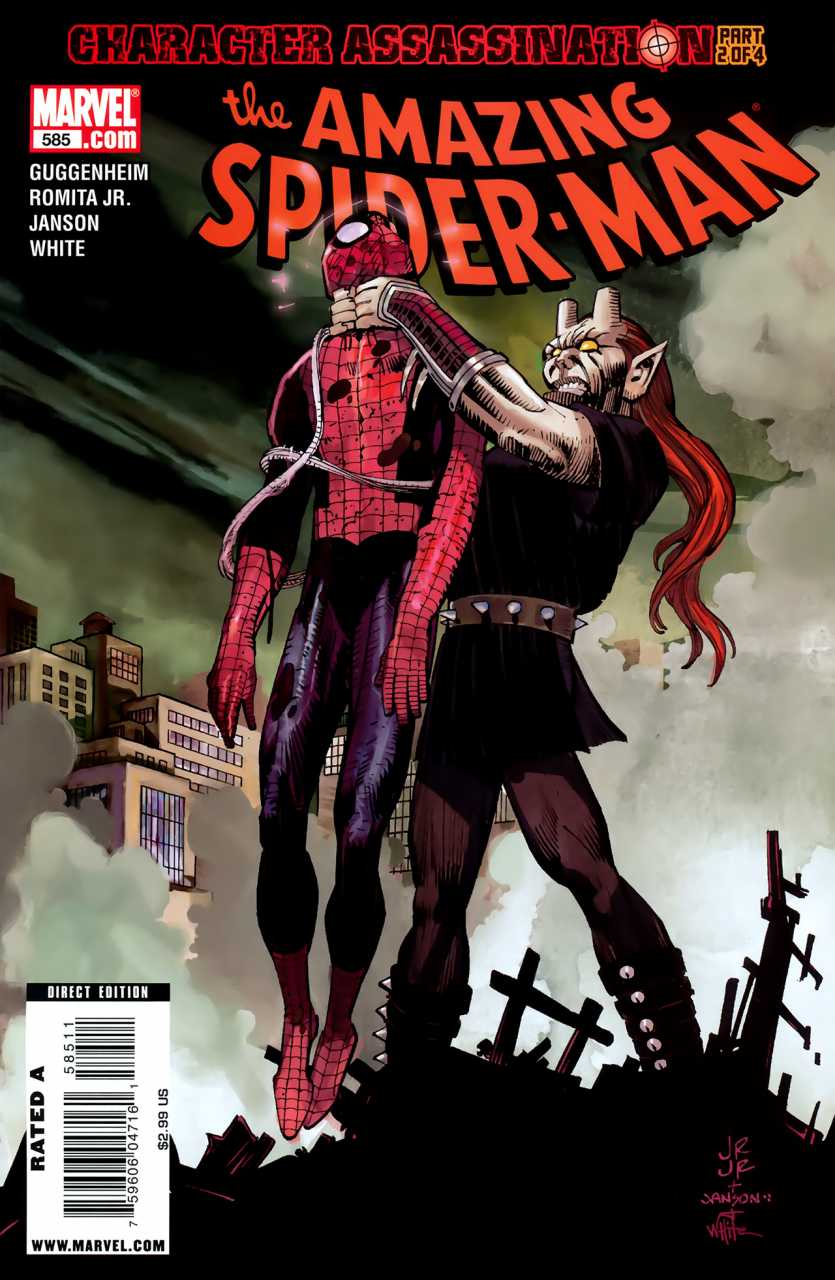