This book needs New U

I just read somewhere that Slott has written about 20% of Amazing Spider-Man in total. Like if you were to pick one comic from 5 random issues chances are it might be a Slott one

Let's take a moment to reflect on that...

Anyway, so I haven't done one of these in a while, but I've been following the book and good lord...

I just love how my favourite hero is a constant @#$%-up every issue so he can learn from his mistakes and be better hero or some bs. I just love how the 'writer' forces him into stupid scenarios where he stuffs up, everyone hates him for and then he blames himself.

There's this part where Spider-Man's in a rush and sees these two idiots running off with cash naturally he goes to web them both up, turns out one of them was only trying to get the money back off the other, typical Slott Spider-Man making silly goofy mistakes because that's what we love about him :) <3

I'm just honestly surprised they didn't have Spider-Man whip out some ridiculous web dissolving gadget or some sh!t to free the innocent person.

So Jay, (the only supporting character I liked in this issue) is dying from something, syphillis or some @#$% idk. There's the conventional treatment (surgery) or this New U thing that'll save his life guaranteed. Peter says go with the surgery because that was Jays wishes I guess but then changes his mind after J.K Simmons guilt trips him with Dead Ben. By then it's already too late presumably. That's just one example of the stupid/dumb/awkward/weird situations the main character is forced in to cause necessary tension with the supporting characters so he can blame himself later on.

During all this, Spider-Mans holding some big @ss crane from toppling over, another great physical feat for the character, I'll give the comic that. On his back is this 300 year clock thing probably about the same age as Aunt May, which is webbed up. It's a family heirloom Jay wanted Peter to give to Jonah which is nice, but he got caught up with the crane crap. Because he holding onto the crane for so long the web dissolves, causing the clock to smash on the ground. Couldn't he just catch it with his legs? Couldn't it just stick to his back? C'mon, just another forced and avoidable situation.

Anyway I guess the smash clock is symbolic like Jays time is up or something, clever.

Other people online pointed out why not just use the quick drying cement webbing to secure the crane or the Spider-Mobile (if it is even still around) or something else? Well everyone, that's because the creative team simply forgot, this is what happens when you make a new absurd gadget every issue.

Nothing else to talk about really, the art was the only postitive for me, dialogue wasn't too horrendous. Aunt May and Jameson were just @ssholes. J.J just sounds like caricature of himself from the 60's he's really cringey to read and treats Peter like crap, I know his lame dad is dying and all but he's not his boss anymore either. Jameson and May have really not evolved or developed under Slott hand.

Other reviews for The Amazing Spider-Man #19 - Before Dead No More Part Four: Change of Heart; The Clone Conspiracy 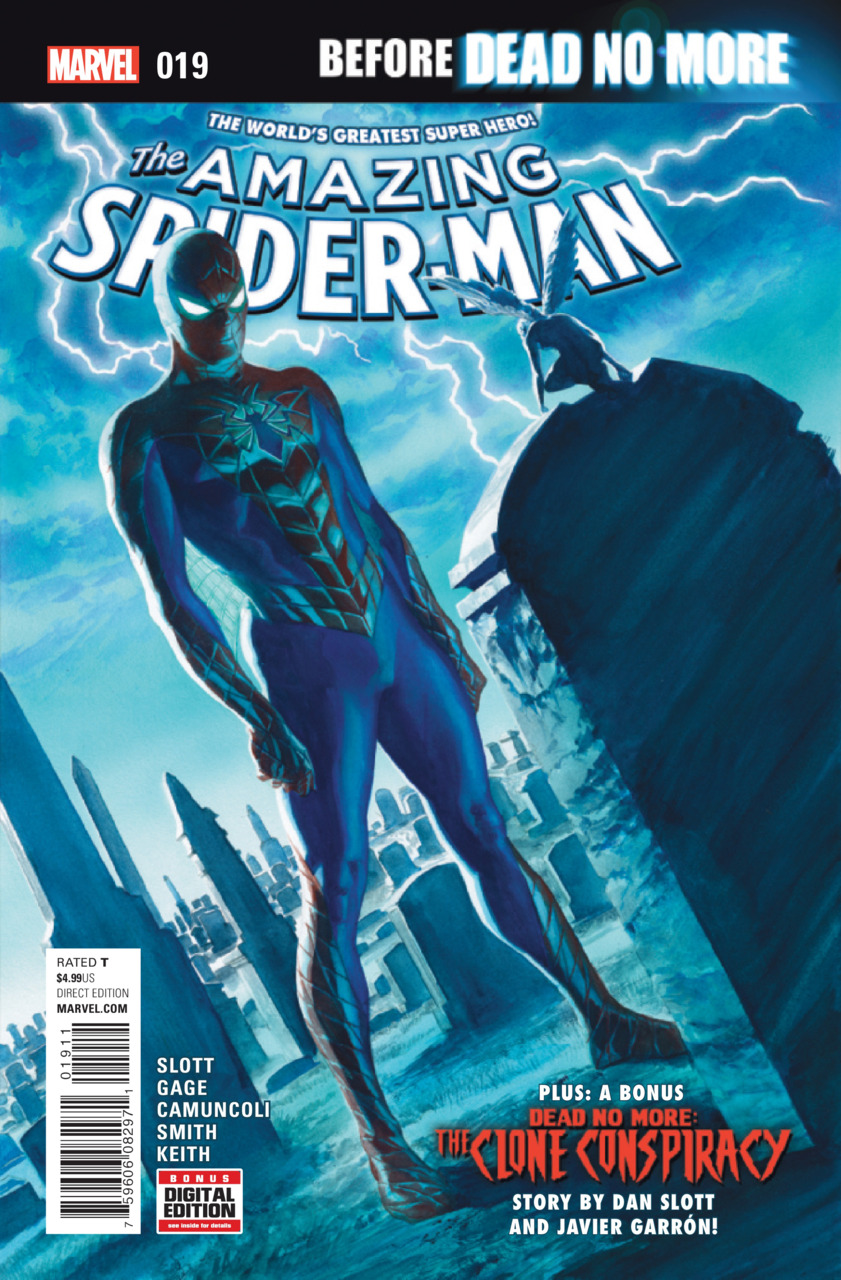 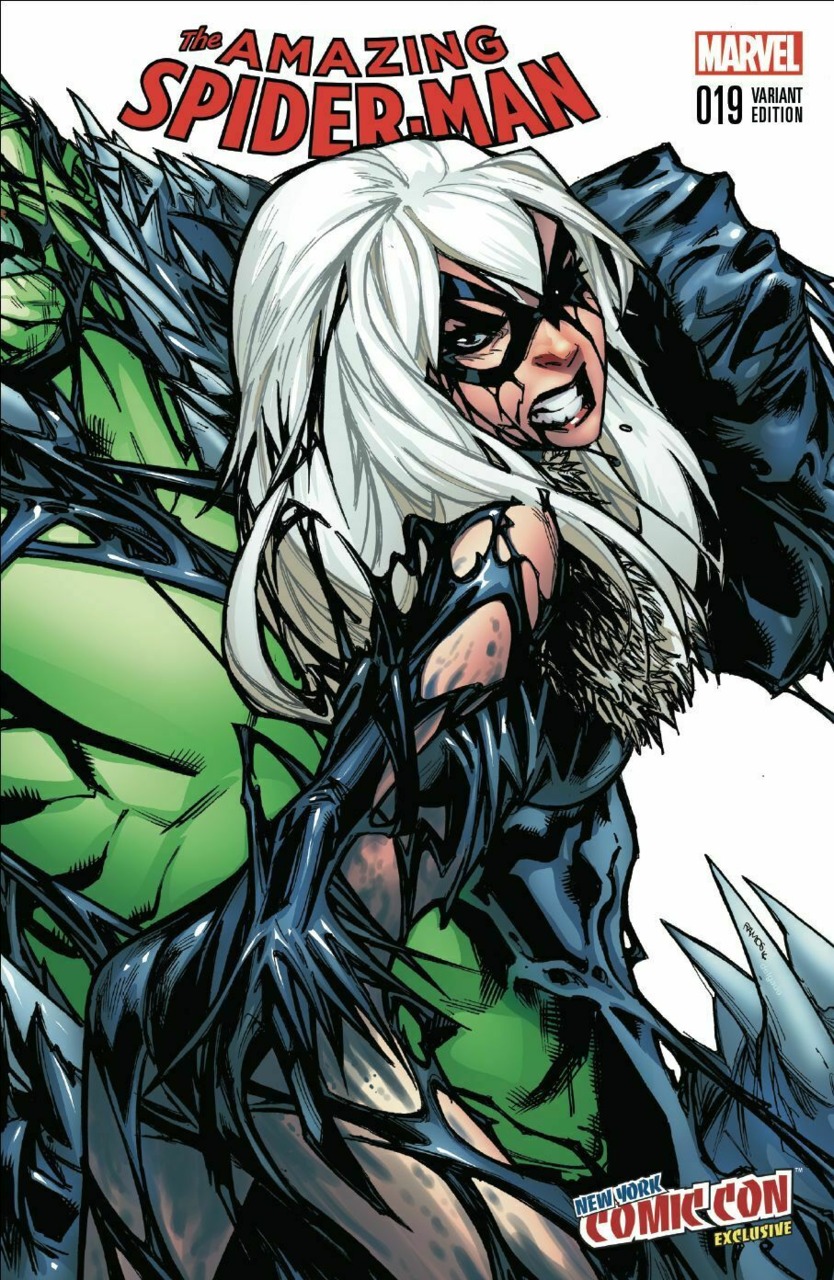 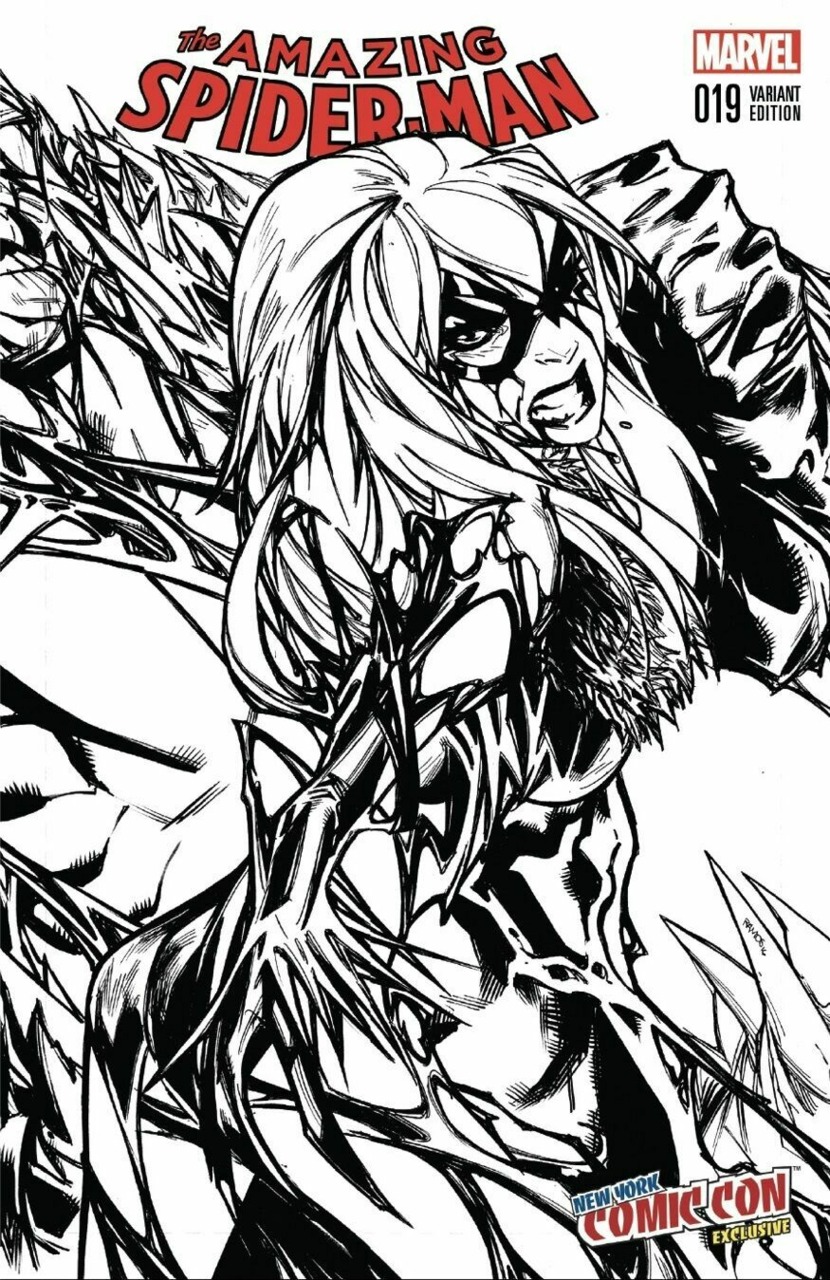 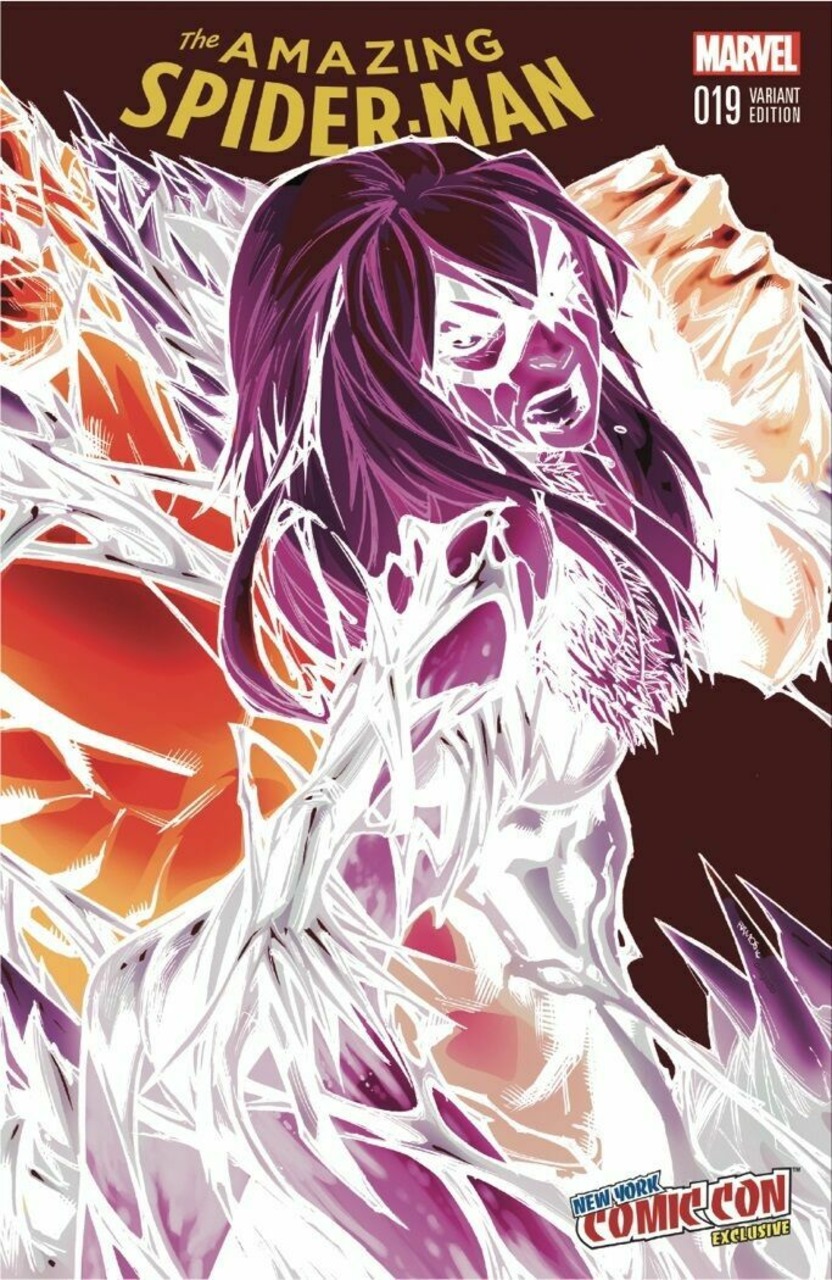 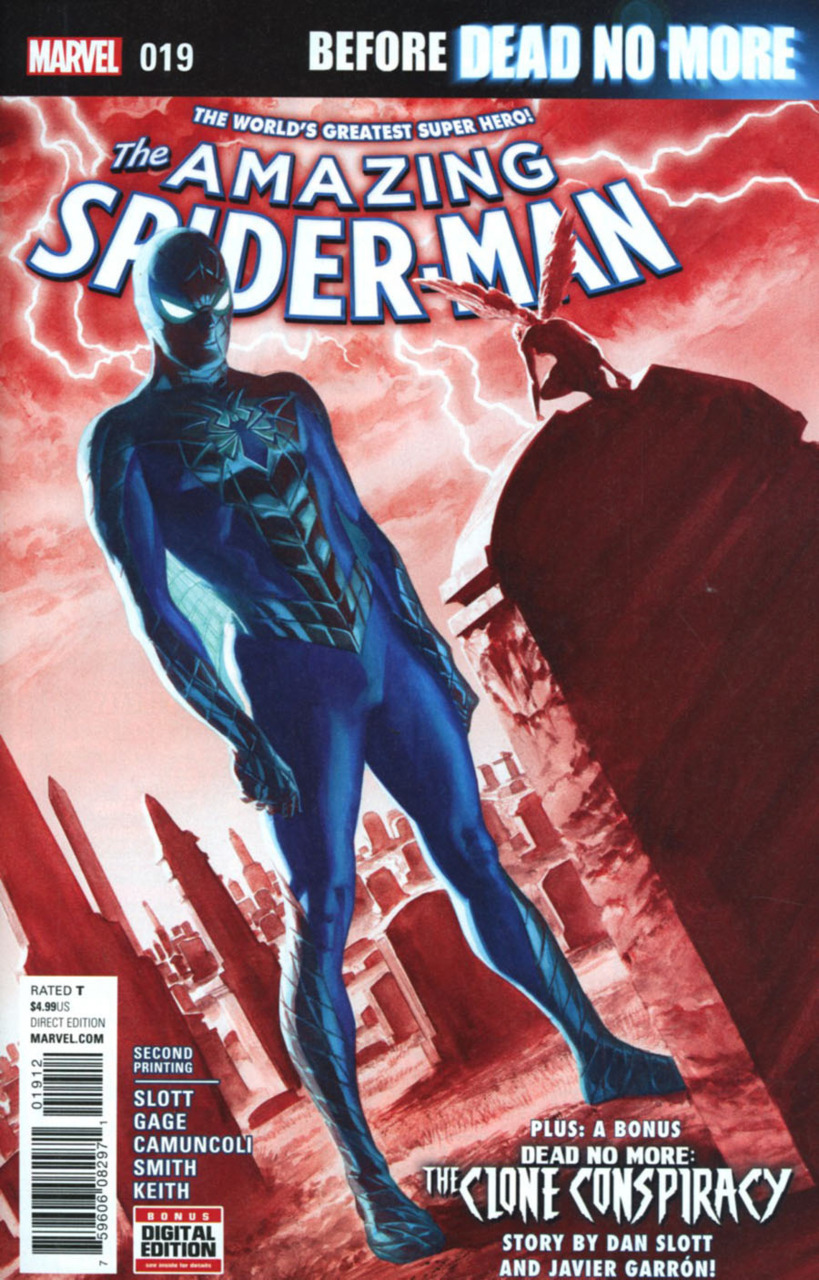 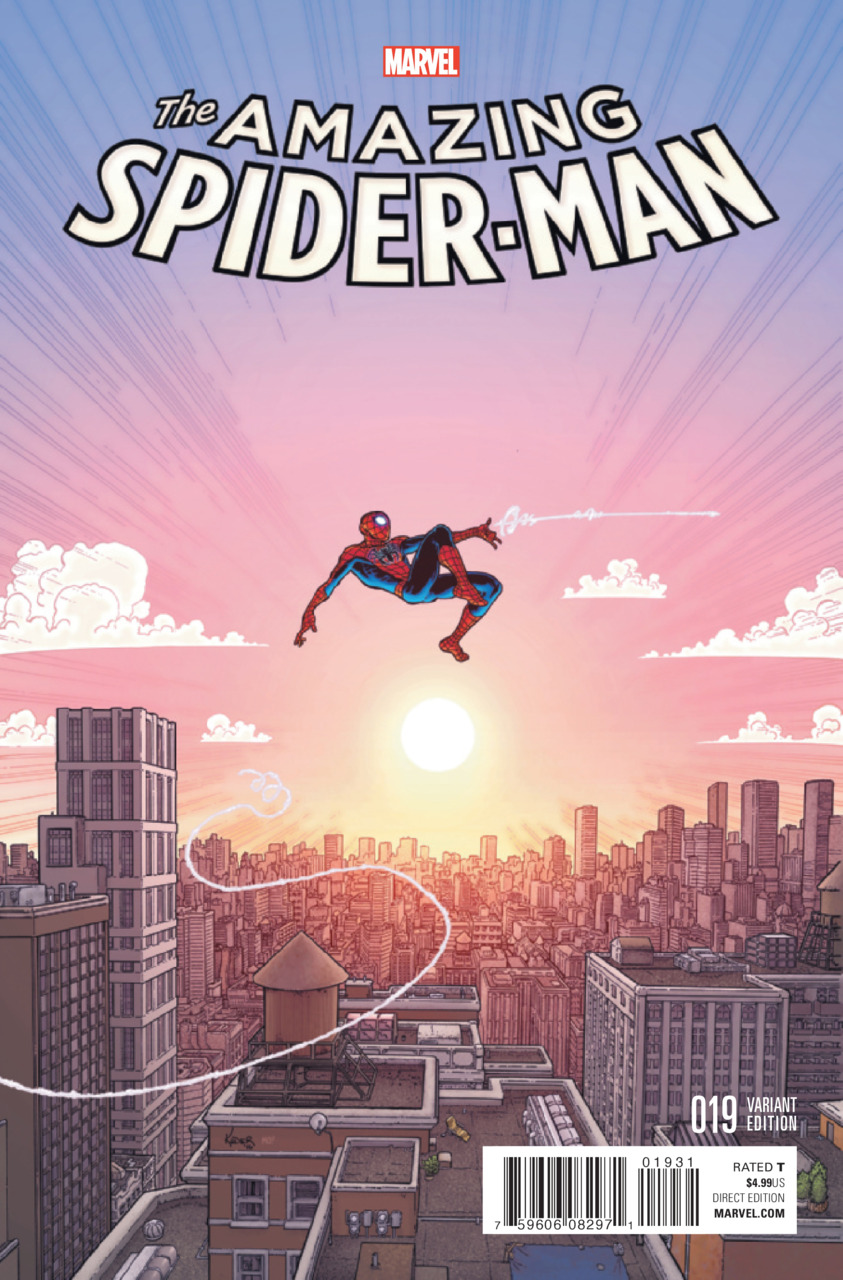