The MAX line doesn't exactly have a huge catalog of titles to choose from, so when something new does come out it gets my attention. Sometimes it'll be obvious why a mini series is coming out like last year's Zombie featuring the original Marvel zombie Simon Garth, and sometimes not so obvious like Wisdom. This mini series features Terror, an obscure Marvel character that first debuted in the late 1980s (as Shreck) in Marvel's original Epic imprint. He was later brought into the main Marvel Universe (as Terror) in the early 1990s. Like most new characters in the 1990s, Terror found himself bumping into such characters as Daredevil, Punisher and Wolverine which was pretty standard for the time. He actually didn't appear in that many issues either. Those are probably the biggest things ever accomplished with the character, so why dedicate a mini series to him? I think that story would be very interesting for a back up of sorts for issue #2.

David Lapham's opening for this issue is a no brainer. Since Terror isn't exactly a household name at the moment, he is pretty much forced to tell his origin story at the beginning of issue #1. While I don't think he actually changed much from the original origin, the first 9 pages of this book were interesting enough on their own to support a 5 part mini series. There isn't just one, but a few great moments in the retelling of his origin that are just begging to be fleshed out. While the issue starts off in the year 455, we soon get to meet the present day Terror. He has very unique powers, and one has to wonder how they even attempted to tell stories about him without it being a mature readers only title. Lapham does a smart move by not playing this character too seriously. A story about a guy that can replace his limbs at will with whatever spare parts are lying around (be it human or animal) already has a sense of morbid humor, and he plays with that very well.

Patrick Zircher's pencils are perfect for the script. He's able to illustrate each time period (during the origin) and the present day without much fuss and has no problems drawing what is asked of him, be it two people sitting at a bar or a huge shoot out between multiple characters. With everything put together, this was just simply a really fun read. The beginning of the issue had some bitter sweet moments, followed by Terror's insane life in the present. If each issue of this mini is as good as this, I would pick up an ongoing title with this creative team at the drop of a hat.

Other reviews for Terror, Inc. #1 - The Dismemberment Plan 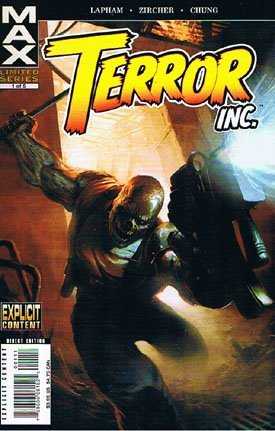