Thank you for flying air Titans!

So in last months thrilling instalment of Teen Titans we had Beast bot, Raven, Miss Martian and Blue beetle track down Wondergirl, Aquagirl, Bomb shell and Static to Holocosts "Hole" where they were being held captive for experiments by a fat guy in a superman shirt. The rescue party then get into a fight with Holocaust where they get whuped. But when all seems lost Vic turns up with his own rescue party of titans, consisting of him, Superboy and Kid Flash. And now Teen Titans #82....

Ok, as you know this is the final instalment in the "Static going home" story, and there fore has a big fight sceen which takes up most of the comic. Now this means that any new story elaments that turn up are near the end. Now this means that i would have to spoil the issue just to tell you the new story developments in this issue, and as i am someone who donst like spoiling these issues for you i'm practically speechless about the goings on in the story ( though i will admit that i never saw the the *mumble mumble* at the end coming ). So as you might guess the majority of the fight is taken up by Superboy, Kid Flash and Vic who seem to be the only ones who can take on Holocauset without betting ther super-hides kicked within a few seconds, and it is good to have them back ( just syaing ). In the last issue i did complain a little about the coloure palet, saying that it semed to be a bit to much on the yellow side, this issue starts out with that problem as they fight inside Holocausts "hole", but then changes to dark purple as the go outside. There would be about 1 and a half ( possibly 2 and a half ) pages with a bright coloure pallet, which is a suprise as this issue ( and the other issues in this story ) seem to enjoy the dark palet of colourse. The art for this issue was good, but probably nothing to write home about ( IMO ).

So overall i gave this issue a 3.5, i had high hopes for this story arc with the first isse of it blowing my pants away ( twas a very windy day....... and paper pants are never a good idea ) but the following issues didnt seem to be able to follow it up. As far as the fight scene was conerned i thought that it was good, but could have been better. But for any teen titnas fan it is a good issue to buy.

Good review, haven't read Titans for a while, so thanks for bringing me up to date. Superboy in Teen Titans doesn't seem right to me, though.

The cover for this issue I enjoyed. It did not tell about the story but, I am always a sucker for covers with the whole team in it.  The story was mostly a fight between Holocaust and the teen titans. The teen titans defeat him by putting him into the core of the earth. Frida forgives static and asks for a phone call every once in awhile. I will not spoil the ending put I will say it leads to another fight. My favorite part of the issue would have to be Frida forgiving Static because I do not th... 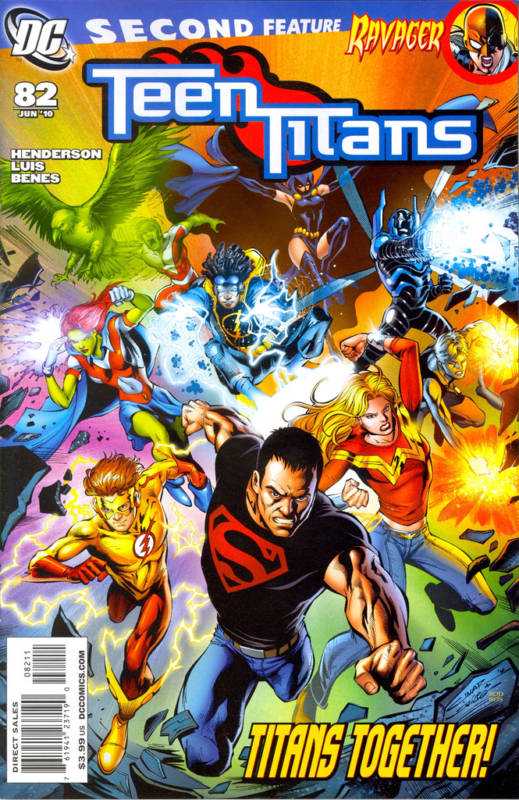