nonua4392's Teen Titans #80 - Home is Where the Holocaust Is review

Headed In the Right Direction

Going into Teen Titans #80, I had my reservations.  As a fan of the Teen Titans who picked up the title with the beginning of this series, I have remained steady with the series even through all of the turmoil that the departure of Geoff Johns and One Year Later caused the book.  So when Felicia Henderson began her run with a decent few issues, I was very happy to just have some Teen Titans issues that didn't involve somebody dying!   However, since the OYL event, a few burning questions have remained with me.  Why does Wonder Girl constantly mope over the death of Superboy?  When are Kid Flash and Superboy coming back to the team?  And fortunately, it seems that Henderson intends to answer these questions.

Henderson's no bullshit mentality that she is building with Wonder Girl as team leader is really appealing, as Wonder Girl has been so wish washy for the past 10+ issues.  Her putting Gar in his place really showed that she does have the chops to be the leader of this re-blossoming team.  Wonder Girl is a powerful and strong character that should be treated as such.

Another thing I was really happy to see in this issue and the last was that Henderson has returned Static to Dakota after being gone for what was about 2 years. I also liked how Static's inclusion to the team wasn't just to lure people back to the book and that they are really trying to integrate him into the DCU.

Bennet's art was nice.  I have always been a fan of his work on this book.  There was a few pages, such as when the Titans were helping people in a hospital, that the art looking rushed and sloppy but I didn't mind it in this particular scene.

As for my rating for this issue, it gets a solid 3.5.  It was a good issue.  Nothing great but it was great to see that Henderson is taking the team in the right direction and actually having original stories and situations for them.  I cannot wait until the next issue to see Superboy and Kid Flash's return to the team and how it will play into Wonder Girl's position as leader.

But I can't help wondering, will Henderson ever pick up the threads of where Kid Eternity is?  I mean, he was their teammate and they all just completely forgot about him.  I'm gonna give Henderson some time to remedy this one though.

Where's The Teen Titans I Loved? 0

I feel like I haven't read this title in a while, which isn't the case. I understand that things change. We can't have the same members all the time or things would become stale. Maybe it's the fact that I don't know a lot about Static and these issues have been heavily focused on him.  The Good: Wonder Girl as team leader is great. She deserves it. The one thing this book has going for it, in my opinion, is the chance to make Cassie a stronger character. With Superboy and Kid Flash on their way...

Disaster With a Double "T" 0

The title continues to slide further and further into a horrendous mess with mischaracterization, stilted dialogue, and random pacing - all of which can be blamed on the writer, Felicia D. Henderson. I've been patient with Henderson, giving her a chance to make improvements as she became more familiar with the Titans, but instead after four issues this team of seasoned superheroes has made little impact as a crime fighting unit and remain embattled colleagues over ridiculous and unseemly issues.... 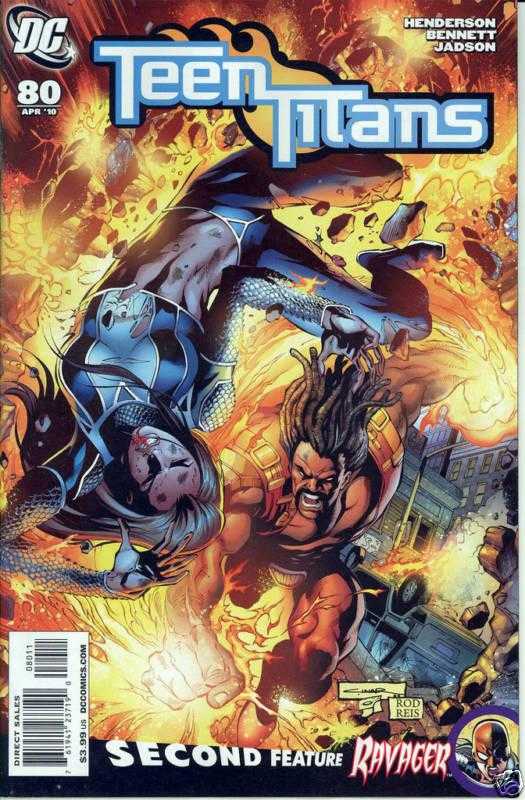