One of the better sci-fi horror movies of the 90's, it shouldn't have come as any kind of surprise that Dark Horse (THE place for movie-related comic book properties of the 90's) would try to tackle a follow-up story, more than a year before the actual sequel hit theaters.

Taking place about a year after the first Movie, science is still arrogant. Having received the same space transmission that SETI got ahold of, a would-be pharmaceutical conglomerate has made their own hybrid specimen. But instead of a female, it's a male. Kal as it's called, soon escapes from his captivity once puberty strikes.

Another team is brought together to try and stop this ravenous procreation machine from siring children. Whereas Sil, the alien from the first movie, was only able to conceive one offspring at a time, the number of potential hybrid children that Kal could create is seemingly limitless.

It's a decent little story that brings up some interesting ideas about the alien biology of the hybrids, especially the male specimens, that would've been interesting to see brought into Species 2. But the story kinda cuts off in the middle of the main story to suddenly tell a side-story about one of the women Kal tries to copulate with and how she got to that point that just kinda comes out of nowhere. Suddenly going from tense sci-fi chase to Vegas-style crime dealings is some definite whiplash.

Instead of trying to outdo the scares of the first movie, it's almost like a pre-Crime Procedural/CSI story that deals more with the pursuit of the vicious hybrid than about how Kal tries to chat women up, or when that fails assault them. Sure there's some brief scenes dealing with the creature attacking people, or trying to stay hidden during the manhunt... but they serve more like transitions... indicating the passage of time as the chase goes on.

I'm a little disappointed though that they marketed this (with the covers) as having Sil/Natasha Henstridge in the story... and she (spoilers) has NOTHING to do with the story outside of some tenuous connections.

The artwork is a mixed bag, clearly showing how hard it is to draw the "Species Alien", much less a then-unforeseen male form. Again this was before Species 2.

Like a great deal of Dark Horse's output in and around this time period, it's still a pretty cool concept and decent story. Though really only fans of the movies should bother. 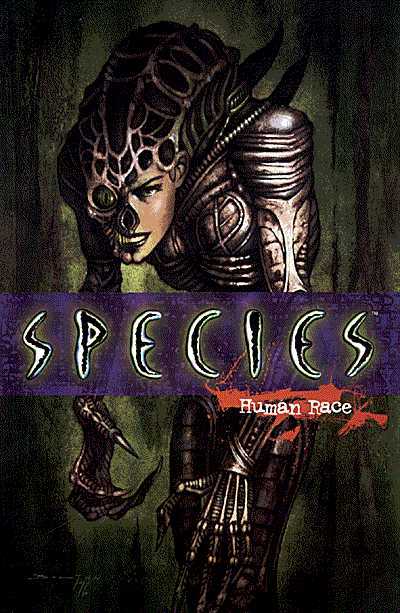