In the 1960s and 1970s, instead of launching new titles, DC Comics would take a concept and try it out in a comic series it called Showcase. They would give a series 1-3 issues, and if fan response was positive, it would spin it off into its own series. Some of the features in Showcase ( Flash, Green Lantern, Atom, the Metal Men) spun off and became big successes, while others never got their own series.

This is the debut of one of those “failures”: Manhunter 2070.

Reading it with an eye for nostalgia, Manhunter 2070 is not that bad. It pretty much blatantly mixes together two major inspirations: the original Star Trek television show (which had gone off the year exactly one year prior to the release of this comic), and Ian Fleming’s James Bond movies (the sixth of which, On Her Majesty’s Secret Service, also debuted one year prior to the release of the comic). The comic paints the year 2070 as a society of various races, all working together in, yes, the United Federation of Planets, travelling the stars thanks to the Bridwell Space Drive (a nod to E. Nelson Bridwell, a writer and later editor at DC Comics). The Manhunter himself, Starker, was a gambler like Bond, always surrounded by beautiful women, and had his own Q: a robot named Arky that outfitted Starker with such weapons as a disinto-blaster and an exposi-needle gun. Other influences seep through as well: the “space piracy” invokes references to both the Wild West and to the sea piracy of the 1800s, and the armored Starker attacks a “dragon” at the end of the story with an air sled and a two-handed sword, much like the knights of old.

The story itself is also quite interesting in that Starker actually does not defeat the fugitives he is after: the first one is felled by carnivore ants, while the other two are dropped by this giant dragon-like creature. All Starker does is killed the native wildlife of Pheidos while avoiding being killed himself, and collect his money. This is definitely a departure from the early 60s stories, where the heroes always defeated the bad guys, but more in tune with the features that came out of Showcase during this time, such as Bat Lash and Jason’s Quest.

If you’re a fan of 60s and 70s sci-fi, then I’d recommend picking this one up cheap, for the nostalgia factor alone.

Other reviews for Showcase #91 - Planet of Death! / Space Duel 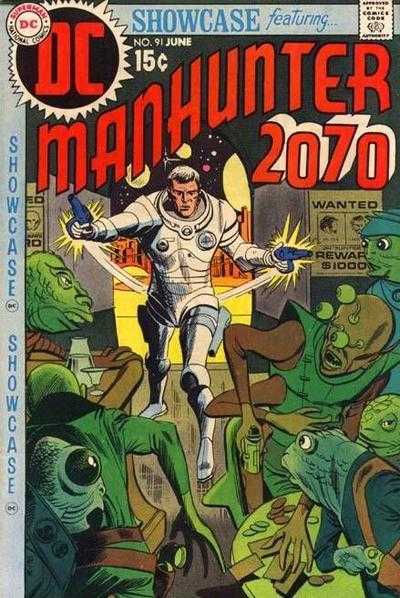