liberty's Showcase #73 - The Coming of the Creeper!! review

How is is possible that I am the first to review such a legendary comic as the first appearance of the Creeper. It is funny how you can see thirty reviews for new book that shows it's ugly head but nothing on a classic such as this. OK....enough of my soapbox...on with the review.

I first have to admit that I am a huge Steve Ditko fan. It started with the Blue Beetle and grew from there. So this may taint my review a little but remember a great comic book creator is more apt than not to make a great comic book. In this case Mr. Ditko does not disappoint as he is the writer and the artist for this book. Buckle up. You are in for a ride.

Mr. Ditko has a cut to the bone style of story telling. Evil is evil and good is good. That is it. When you read the origin story of the Creeper you see his alias Jack Ryder fired from his own show when he calls out his guest on a live broadcast. Mr. Ryder is quickly fired form his job for insulting the the guest who is also the friend of his sponsor. The cool thing is Mr. Ryder knew this before the broadcast and has no problem loosing his job as a result. He knows in his own mind that he has done the right thing. On top of that Karma steps in and he gets a new job before he even leaves the building.

I wish I could have read this in the time it was released. It is always advertised as being such an off the wall story and it is but it must have been so much more shocking way back in 1968. It was a very neat and creative origin story. Something that is lost more and more in today's comics. The Creeper takes steps towards developing his persona all the way through the issue as he changes more and more into the character the Creeper. He gets his costume, his power, his walk, his laughter and so on as he picks up on the art of what works while being shot at by the mob.

I do like this story. Although older and not a style some might be use to it is still a great story and holds up better than most of this era. It is also the first appearance of a legendary character and should be read by any true comic fan. I cannot wait to read the next story of the Creeper that was printed in Creeper #1. I give this seven out of ten. Enjoy this book. Cherish it.

Other reviews for Showcase #73 - The Coming of the Creeper!! 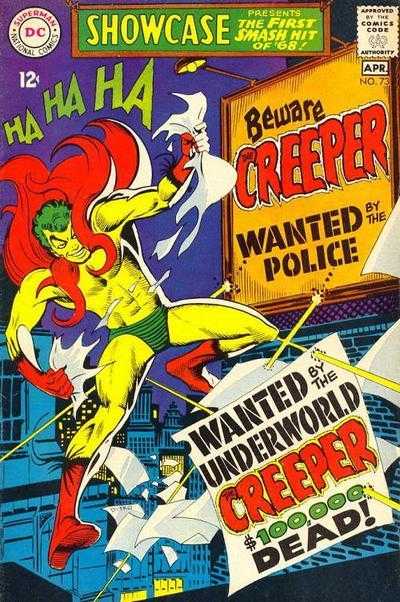