As soon as I finished reading this book, I was immediately compelled to tweet, “@mercuryeric Impressive - Poignant - Mesmerizing. Easily the best 2 hours I have spent in a long time. Bravo.”

In the simplest terms, this book blew me away, you see.

I was lucky enough to meet one of the writers of this book last week in his LCS in Lacey, WA. A warehouse of a building, this shop is one of the largest I have seen in my cross-country LCS search. These details are really neither here nor there as it pertains to the story in this book, other than getting to know Eric a bit in his own environment, with his family, certainly adds to the allure of the story being told and the pain experienced by the real life events it was loosely derived. I then was lucky enough to meet and discuss the book with Eric, Brandon and Steve while attending the Emerald City Comicon in Seattle, WA (April 30th and 31st).

On to the story – Never before have I been taken through such a roller coaster of emotions in such a short period. As my tweet portrayed, I was mesmerized by the content in this book – and this comes from someone that has almost only ever read superhero books. In a way though, Terry Glass is a superhero, in a bare bones sense of the term anyway – he holds a moral high ground, fights for what is right, and is tormented to the core. In the end, rarely do superheroes get what they want out of their lives – but they often come close. Terry came close – close enough to see what it really takes to be a superhero, personal sacrifice.

While some members of my extended family (and my wife’s family) are deeply entrenched in a military lifestyle, my experience with anything military comes third and fourth hand. On top of this, I have never really taken to “war stories”. So as much as this book will draw in the military minded, war story fans, and those looking for a great drama, it can certainly hook people like me as well and in this respect, the book is very “new reader” friendly. You should take note that it is not for the faint of heart. It depicts and describes visceral wartime scenes. It is finely tuned to make you feel exactly what the characters are feeling – when Terry describes the feeling of “incoming”, you are already on the literal edge of your seat. So many times during this read, I caught myself physically flinching, anticipating another shocking reveal in the plot and potential further torment for the main characters.

Some of the stress is relieved in so much as the story is narrated by Terry – and at the very least, you know he endures through the first part of the story. However, you continually wonder – Will they throw a last minute curveball and switch to posthumous memoirs instead of active narration? That feeling stays with you throughout the book, even to the very last page – and I am certainly not going to give it away. The last panel leaves you as satisfied as the first. You sit back and say to yourself, “I am somehow a better person for knowing this story.” Because whether it was based loosely or closely to real life events, you know deep down these exact happenings have been endured by far too many folks, and have tormented far too many families.

There is not much more I can say about the story that I have not already conveyed above. You can tell it came from a very personal place and holds significant meaning to the writer(s). One of the most emotive parts of the story is every interaction and historic reference between Terry and his daughter. I physically reacted multiple times, seriously, at the brink of tears. This feeling is buried deep in the pages of this story and is brought about just when you least expect it. One simple statement can sum this feeling up, especially given the context in which it is delivered: "I'm glad you're home daddy."

Wonderfully depicts what you will experience while reading the interior content. In the introduction to the book, the concept of “tearing paths” was presented – not only is this illustrated on the cover, but also was the inspiration for this review. As soon as I read those words in the introduction, I just knew that would be the name of my review. This phrase combined with the cover art set the stage for the story from beginning to end.

Perfectly illustrates the story in an artistic style that is true to the characters, emotions and mood of the book. Black and white except for the cover, the lack of color only adds to the somber feel depicted by the content. So much of the emotion in the book makes you feel that color would only spoil its portrayal. In fact, there are only a very few scenes that contain enough positive feelings to warrant colored illustration. And boy wouldn’t that have been cool – a different concept – highlighting the good feelings with color and keeping the bulk of the story muted in black and white.

You do not have to be war buff, have experience with post-traumatic stress syndrome, or any other link to the military to enjoy this book. Whether you take this as a war story, military saga, or heart wrenching drama, you will find something here that makes you "feel". On April 18th, 2012, be sure you have a copy. Read it. Feel something, different.

For more information on this Veritgo Graphic Novel, see the following links:

For an even deeper look into SHOOTERS, be sure to visit The “Unofficial” Official Home Page for SHOOTERS: http://www.steelriversecurity.com/

Other reviews for Shooters #1 - OGN 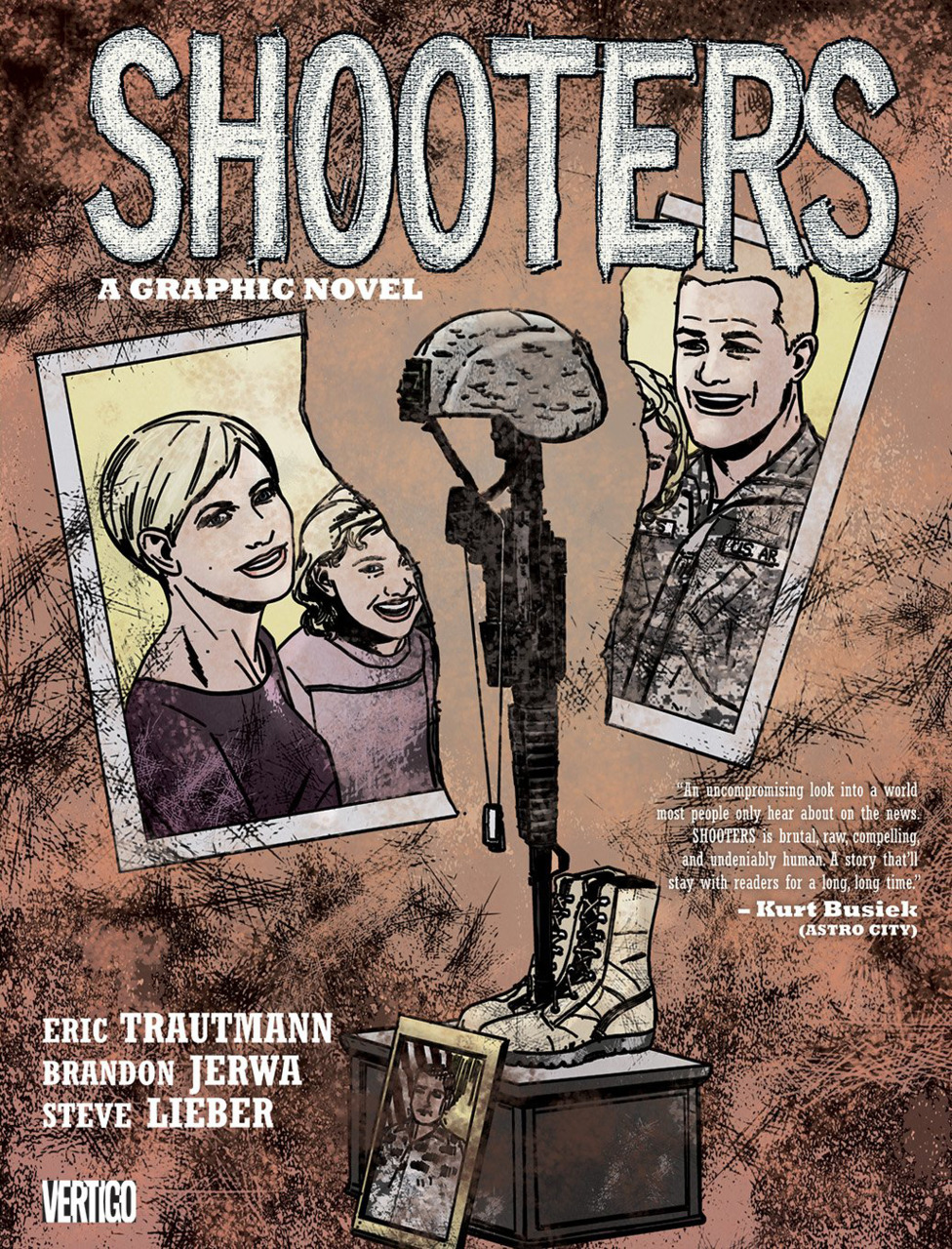