Lunar Looney or Victim of Khonshu?

Let me say that the cover to this comic is one of the best I've seen in awhile.  It is beautiful.

The interior art, though, is a bit..off.  What could have been a truly amazing book gets dropped down a notch because the art is inconsistent and when some characters are portayed during their youth, the reader may not be able to discern exactly who the characters are.   From one page to the next, I had to look back and forth because the artist failed to keep the characters' appearances consistent.   Add to the fact the young characters look like adults whose heads have been placed on the bodies of kids.  Yet another complaint in this area, they appear way too cartoony.  I don't mind a nice mix of cartoon and comic style art, but here it just falls flat.

The art IS good in many spots, though, backgrounds, objects, city scenes, buildings, mansions, these all stand out, but it seems the characters were inconsistent.

I could NEVER do anything even approaching the artwork in this comic, but if I am going to read a comic I'd hope for some consistency regarding how the characters look.

My complaints aside, if the reader is at least familiar with Moon Knight, some major changes are on the horizon involving Khonshu and Moon Knight, and perhaps may explain why Moonie has been acting the way he has been.  Some more of Moon Knight's life story is also revealed.

There is a tie-in with Daredevil and a few other sub-plots occur which I don't want to spoil.   Indeed, they are enough to keep the reader interested.   However, if you aren't familiar with the Shadowland storyline, a new reader may be at a disadvantage as not much is explained in this area concerning Daredevil and The Hand.

I find it hard to fathom that Moon Knight would allow himself to have a woman that close in his life, given all he's been through.  Not saying he shouldn't have one but it seems a bit out of place.  While I like Moon Knight, there really are some things that are a bit too close to Batman; he is very wealthy, has a loyal manservant, has a lot of gadgets, and even uses a street guise as a taxi cab driver to get info.  Matches Malone anyone?  I wish these details were excised and Moon Knight brought down to being an ACTUAL street level vigilante.

MOON KNIGHT'S APPEAL:
However what sets Moon Knight apart is the fact he can be very hardcore, far more than Batman ever thought he could be.  Moon Knight also is a Marine, and that is something Batman could NEVER touch.  Moon Knight's strength, and essentially his craziness and willingness to go farther than other heroes, sets him apart from other characters, whether its DC or Marvel.   Plus his costume is one of the best around as evidenced by the great cover art.

Due to the fact the art was inconsistent to me, the story involving the actual Shadowland bits not properly explained for the new reader, and given the cover price for a tie-in book, I can't necessarily say one should run out and get it even if you're a fan of Moon Knight.   The one thing that DOES stand out, though, is Khonshu and what the heck may happen between Moon Knight and that entity.

Yet another great Shadowland story arc crossover! Jake (or Steve, it all depends on who you're talking to) seems to finally have everything going in the right direction. He bought a brand new mansion/base of operations, him and Frenchie are teamed-up like the old days with Crawley and Ray backing him up, he has Marlene living with him again SPOILER WARNING: Click here to reveal hidden content. (and she's pregnant!!), and he seems to have Khonshu and his hunger under control. But  Daredevil...

When I heard that Moon Knight was gonna be a part of the Shadowland event, I got immediately excited, because I had the utmost faith that Hurwitz could do wonders with the character in that setting. So far, I haven't been let down. It's not perfect, but it's a helluva start. Basically, Steven Grant is the new dominant personality, and he's finally happy. Millionaire by day, Moon Knight by....well, by night, and the father of his love's baby. Unfortunately, Khonshu is not pleased by this. He's lo... 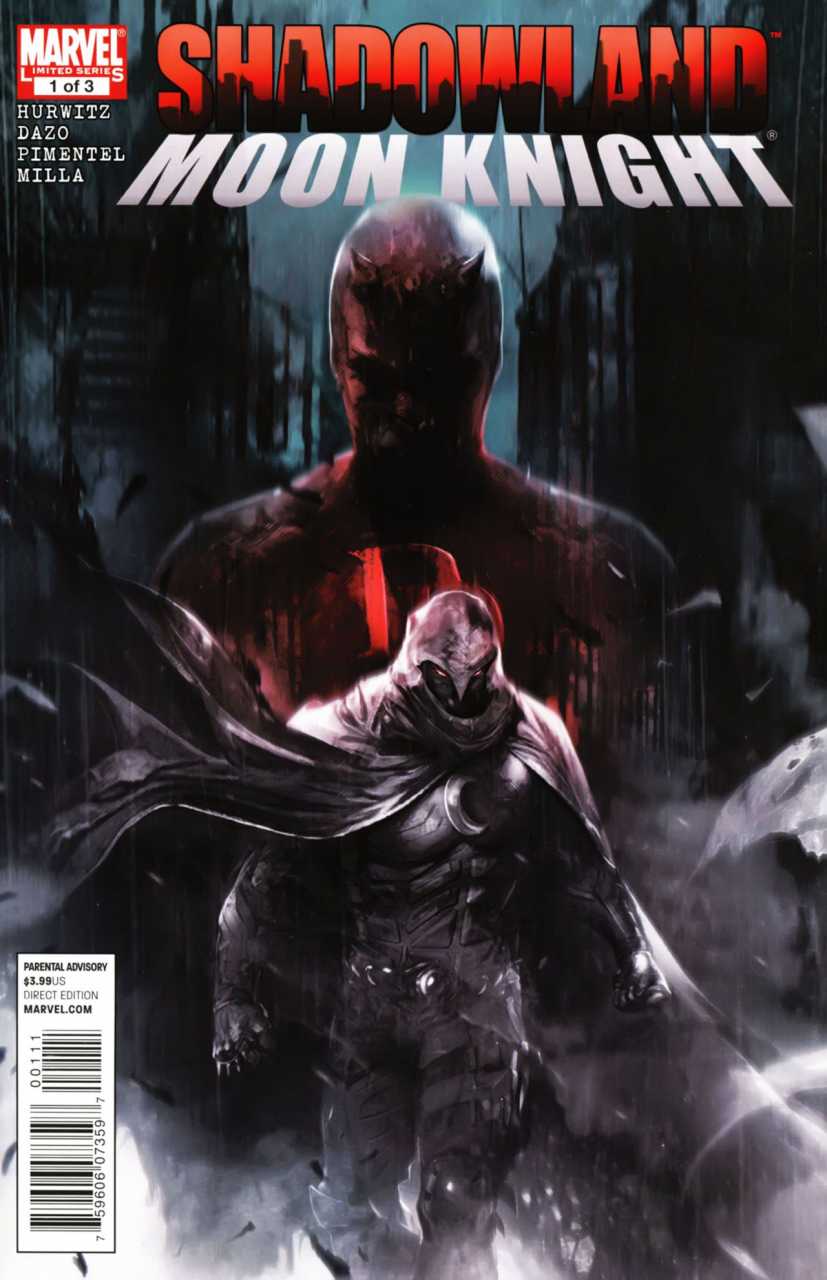