jamesewelch's Sea Bear & Grizzly Shark #1 - They Got Mixed Up! review

They got mixed up, but the stories are both excellent

Sea Bear and Grizzly Shark is the harebrained idea thought up by Jason Howard (artist from Astounding Wolfman) and Ryan Ottley (artist of Invincible). They arrived at the concepts from a late night post-conference discussion about what is scarier than a bear in the woods. Their answer was a shark in the woods, but how did the shark get there and where did the bear go? Those ideas lead them to Robert Kirkman (writer of Astounding Wolfman and Invincible). Kirkman’s first question was how did they get mixed up? Ryan and Jason was at a loss for words, so Kirkman decided to write the origin story for the pair and gave them some advice on how to write their two stories. Ryan and Jason each wrote and drew one story (Sea Bear by Jason Howard, Grizzly Shark by Ryan Ottley). Kirkman’s advice was to not talk to the other guy about their story, to let the two stories develop independent of each other.

The book is full of goofy jokes, gruesome gore, and violent attacks by a bear rising from the sea and a shark running free through the forest. The origin story by Kirkman at the beginning of the book is just perfect. It’s one of the few times that I chuckled at the opening/introduction text before even reading the comic.

The stories don’t show Sea Bear and Grizzly Shark within the same story. They are two independent stories that are both 24 pages, so the book is 48 pages in total (excluding origin story on inside front cover). The pages aren’t colored, just shaded with grays.

20 years ago, a nice family fishing vacation trip gets interrupted by the Sea Bear. As one man believes he’s caught a fish, it is instead the Sea Bear that gets pulled out of the ocean and onto the boat. Soon the bear claws everyone and kills everyone, or so the bear believes… Inside the sleeping quarters, a young boy had just been put to sleep and awakes to find the Sea Bear covered in blood and his family killed. The young boy watches the Sea Bear jump back into the ocean. The young boy then returns 20 years later after quitting/escaping his employer while working as an assassin type agent. When he returns to the island where his family rented the fishing boat, he discovers that most of the inhabitants are descendants of the Sea Bear and don’t take kindly to people wanting to kill the Sea Bear. Meanwhile, his former employer sends another assassin to kill him as he searches for answers on where to find the Sea Bear and attempt to kill it.

The Sea Bear story was great and the artwork was even better. I had never seen Jason Howard’s work before, and I briefly met him at SDCC 2010 (when I bought this book). I think this is a good solid story, albeit it is intended to be a bit goofy. The story doesn’t take itself too serious and is full of fun and laughs and a few story twists.

Something strange has been eating Pete’s cattle and so he goes hunting with his son to hopefully kill the Grizzly Shark. His son doesn’t believe that a shark could live on the land, but they soon find out that the father is correct when the Grizzly Shark attacks. Meanwhile, Pete had hired a few good ol’boys to come in and kill whatever was killing his cattle. When they arrive to the forest, they meet up with Pete and what’s left of his son. The Grizzly Shark gives chase through the woods until the final confrontation with the men.

This story (and particularly the endings) are very well put together and just as fun and full of laughs as the Sea Bear. I had seen Ryan’s artwork in Haunt and Invincible and this was just as good as his other work. It’s great to see some artists taking a chance to write their own material.

Great, funny, goofy book that doesn't take itself too seriously. I’d love to see a Sea Bear versus Grizzly Shark follow up book. I was also lucky enough to find this book at SDCC2010 since it's sold out at most comic book shops and have been sent back to the printers for a second printing. And double-bonus that I was able to get both Jason's and Ryan's autographs on the cover.

Other reviews for Sea Bear & Grizzly Shark #1 - They Got Mixed Up! 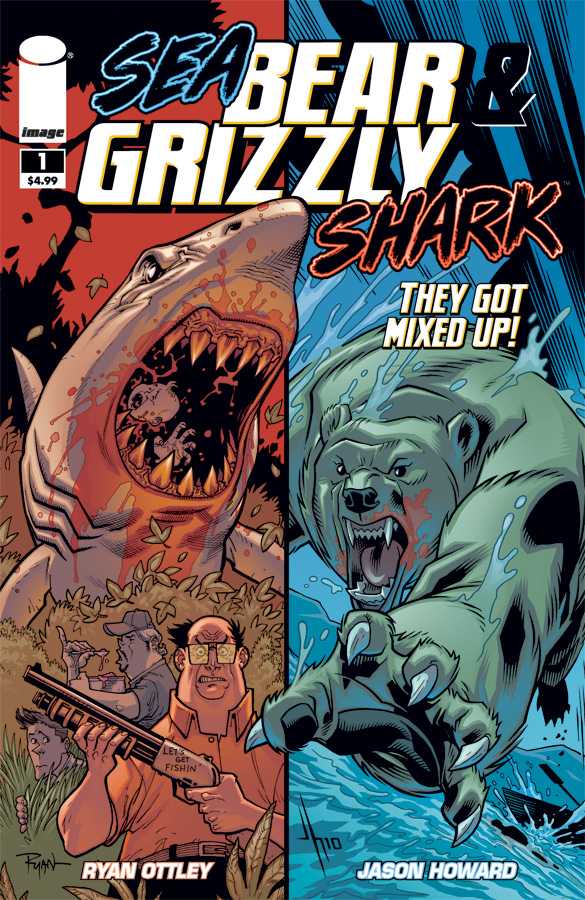