Years of Future Past #1

Mutants have been hunted all but to extinction as President Kelly’s vicious run continues unabated. Can the next generation revive the hope for the future?

The emphasis placed on the Days of Future Past storyline has always been puzzling. It was a tremendous story and very effective both in its time and now, but it was also only, originally, two issues long. At least the part in the past was. Despite that, there’ve been sequels, spin-offs and entire film based around the idea that, after a prominent anti-mutant activist or politician is assassinated, the world turns on mutants in a startling and united way. This issue supposes what would happen if not only was that future not averted, but what if it was carried to its logical extreme. Marguerite Bennett wastes no time in tossing the reader into one of the more grim visions of mutants’ future, quickly establishing that this isn’t just ANY dystopic future, but one where hatred and genocide is normal and accepted. Though hope springs eternal as that acceptance appears to be on the wane, but those in power aren’t traditionally known for allowing it to slip from their grasp and President Kelly (apparently his senate run was quite prosperous) is willing to do anything to keep not only his power, but his stranglehold on all mutantkind. Bennett establishes this world with a rapid economy, and doesn’t skimp on lots of small details that make it feel not only well-realized, but totally lived-in as well as a healthy helping of psychological realism. Despite the book traversing a great deal of geography, it never feels fractures nor directionless and never feels like it had to cut corners to get where it was going.

Mike Norton’s linework is instrumental in establishing this world’s tone and tenor as well, and he does it through a lot of hard outlines. These characters are well defined as is the world they live in, and Norton’s lines are smooth, but never soft as they show characters who’re clearly on their last legs until a critical development infuses them with new vigor. After that, the linework defines their newly found determination to see their good work done. FCO Plascencia’s colors are dark and dreary, perfectly evoking the sense of grim hopelessness that pervades this world. Far from being one-dimensional grit, though, when things turn around there are subtle shifts in the palette that let the reader know it won’t ALL be doom and gloom, which does a nice job of breaking up what could have been very monotonous.

There are a couple of moments that cause some cognitive dissonance, such as a sentinel showing a bit more personality than one would generally expect from them as well as some costumes getting a much-needed update while others are...less updated.

Clearly those complaints are extremely minor in the grand scheme of things and this is a refreshing take on some very well-worn territory. It’s interesting to see Bennet and Plascencia take this old-school story and, while still being very respectful to what came before, taking it to a new, exciting place. Usually the dystopias that are in comics are only flashes or fragments of what could be, either corrected or forgotten by the time the next arc begins, so seeing one taken to not only the future, but years and years into the future is a breath of fresh air and helps establish both stakes and a sense of place. This almost feels like the final issue, or very close to the end, but there’s still plenty of ground to cover and plenty of great characters to explore.

Was hoping this would get 5 stars, really liked this one. It deserves it.

Shut up about Piotr's costume! It's fine...

I've been pretty picky with my SW tie-ins, only getting stuff that seems like it has real potential. I was probably more interested in this than any other.

I was underwhelmed. OK art at best. Nothing very interesting going on with the writing. I just feel like if you're going to make series based on the best series that Marvel has put out over time (not just this, but all the new, updated series from Armor Wars to Inferno), you have to have AMAZING writing and art--something to make it worthwhile. Otherwise, you're clearly going to pale in comparison with the original. If you're not going to be better, why even bother? This did not get anywhere near that test, to me, and didn't whet my appetite for a second issue.

This was ok. I'd probably rate it a 3/5, maybe a 4 at best. The story is ok, I thought the writing started strong but waned a bit in the second half. Nortons' art was solid, but oddly I didn't think Plascencias coloring was very good in this. I thought it was too dark of a palette and gave too much of a muddied appearance. This wasn't anywhere on par to the coloring he's done on Batman. Having said all of that, I might still pick up the next issue to see how the story progresses, just depends on how much my budget holds up with several of the other Secret Wars books I liked better and others that haven't started yet.

@captainhoopla: I agree, this was more like 3/5 stars for me, mostly due to the writing. I felt like the ideas were there but the execution was mediocre. The part with the Sentinel might have been the most obvious example, but there were several other points where I felt the author lacked familiarity with the characters' personalities.

Is it just me or was Kitty's daughter basically Hope Summers? 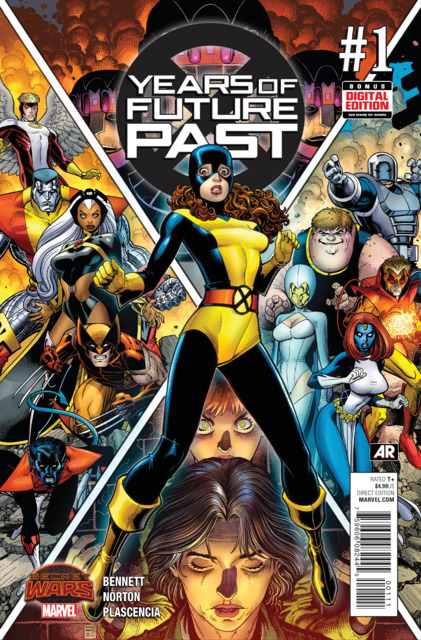