The mutants in this section of Battleworld face persecution from without and from within as they struggle against a sickness that threatens to wipe them out.

There’s something to be said for alternate dimension book that takes your favorite characters and re-imagines them in new and inventive ways. And then there are books that take a very small handful of B-tier characters and either invent wholecloth, or recruit from even lower tiers, to breathe something more new and original into the setting and characters. This is definitely an example of the latter as only a few of the core team members of this issue could be considered even moderately well-known. Marc Guggenheim has been known as a jack-of-all-trades when it comes to writing comics, and he presents a very solid, sturdy narrative around a cast with a great diversity of powers. There’s an element of real tragedy and desperation running through this entire issue as this ersatz X-Factor try to help the mutates of a recently liberated Genosha to survive through a massive plague that has left them quarantined and without aide. Guggenheim writes with an eye for sympathy but with a massive undercurrent of determination and when a plot is finally hatched, it is as audacious as one might expect from such a source.

There are few people in the business better are drawing pissed off grimaces than Carmine Di Giandomenico, and his linework proves that again in this issue. There are few smiles to be had at this situation, and his art does a fantastic job of really focusing on the smaller facial details that communicate not just anger, but frustration and even a little bit of angst. The settings he creates also look fantastic, with futuristic vistas that look to be on their last legs before crumbling into ruin and backgrounds that never once cut any corners. Nolan Woodard’s colors are more vibrant and alive than one might expect from such a desperate, dour issue, but it helps to highlight the never-say-die attitude of the core cast and stops the book from descending into moroseness.

As interesting as the plot is, the characters are not terribly well defined. It felt oftentimes like they were interchangeable, even Rahne if you don’t account for her accent, and that lessened the impact of the issue’s events. There’s also an undercurrent of meanness permeating the issue as the other X-Men come off less remorseful about their friends’ situation and more completely unwilling to even entertain the notion of helping them. There are some inconsistencies with the dialog as well, though it’s difficult to pinpoint them without venturing into outright spoilers, but a big one centers around the Summers brothers.

This issue is the definition of a good, solid issue. It’s not spectacular, but it’s also not anywhere close to being bad. It deals with some very heady, heavy issues and doesn’t always nail the right tone or tenor with it, but still manages to get some thoughtfulness peppered here and there. This seems to be as close to an X-Factor book as there’s going to be, so it would have been nice to see more members of that core group, but the ones who do return are welcome and the new ones (or are they merely obscure?) have a lot of unrealized potential. In fact the book itself, based on this issue, has a lot of potential. Here’s to hoping it gets realized as the title continues. 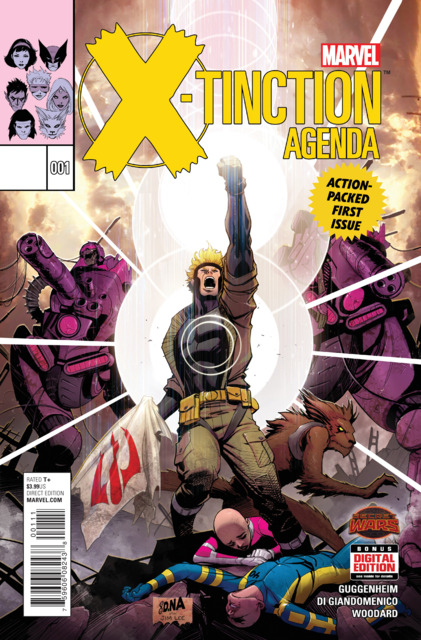