In order to stop Dead Hand, which is heading towards Earth, Aric calls upon the other armors of the universe to fight the robot planet before it destroys the planet he calls home, much like Dead Hand did to Loam. The race is on to save Earth, but will Aric have to do it alone?

Let's answer that question right away. No, he won't have to do it alone. We've already seen that there's no way one lone Armor can take on Dead Hand. It's like swatting a fly with a fly swatter, if said fly swatter was the size of our moon. This is a big moment for the story arc because Aric has to do something in order to stop Dead Hand and while the result was very predictable, that doesn't take away from the fact it's going to lead to some awesome things in the next issue.

The designs for the other armored beings were pretty fantastic. Diego Bernard, Ryan Winn, and Brian Reber so a wonderful job at giving readers a look at all lifeforms from across the galaxy, especially the one that is a floating playing cart and my personal favorite, the giant head with six legs.

There's actually a moment in this issue where the reader has to question the future of Aric as X-O Manowar. All the other armors he talks to have a hive mind and they may look different, but they have no individuality. What's going to happen to Aric? Will he become like them? This scene really raises more questions than answers, and maybe we'll get a look at whether or not this happens to Aric in BOOK OF DEATH.

There are some slight problems, here and there with how Aric looks in the armor, more within the medium shots. It looks almost like face is pasted on the helmet and he's not actually in it. The close-up shots look fine. Part of this could come from the coloring where it's just not showing enough depth.

No real surprises here. Everything plays out like fans know it would, and as a stand-alone issue, it's decent. This is an issue that would work extremely well when contained within a trade, but as a stand-alone, it really doesn't pack the punch the rest of the issues do in this story. The issue drags a little bit here and there.

Dead Hand moves forward and is still a great arc for X-O MANOWAR. It may not have the same have the same impact as previous issues, but it's a solid read. One of the problems for this book is that it's coming out of the ARMOR HUNTERS event, so it can be hard to follow something so large and epic. Regardless, Venditti, Bernard, Winn, and Reber do some fine storytelling here, even if this issue was more about build up over anything else. X-O MANOWAR continues to be Valiant's stand-out book for me. You seriously should be reading this. 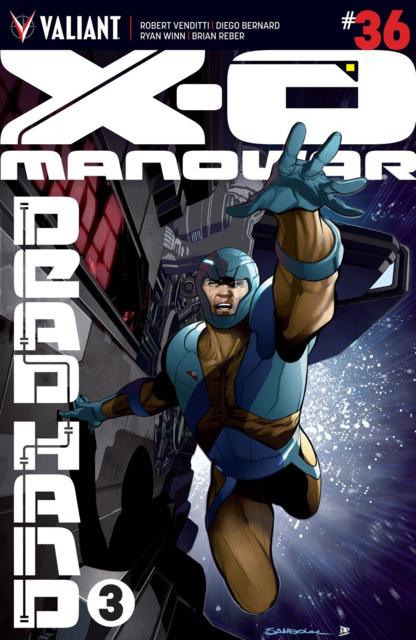