The Jamie Madrox/Layla Miller relationship was always one of my favorites in comics if, for no other reason, than because it was unexpected but incredibly tasteful in both its inception and its progress. I've also always loved both characters, so seeing them get together seemingly for the long run was heart-warming and comforting. So when Madrox wound up with a mask slowly transforming him into a demon, it seemed that tragedy might win out as it was still unresolved at the beginning of this, the final issue of Peter David's supremely epic X-Factor run. The issue opens with Layla facing a titanic revelation, conversing with an old enemy and, finally, reuniting with an old friend, all against the backdrop of trying to keep her head down on the abandoned Madrox farm whilst caring for her feral, demonic husband. The dialog in this issue is part of what makes it a great one, you can definitely tell that David has finished his X-Factor story, and all it took was a decade. There's a little bitterness, a lot of sweetness and a great, big deus-ex machina that would have been absolutely infuriating if it hadn't been completely earned and foreshadowed issues ago.

Neil Edwards along with Jay Leisten and Matt Milla have have been handling this last arc (the latter two actually going back even further) with just the right amount of emotional resonance and verve, so it's only appropriate that they be here to see the series off. They do an absolutely incredible job, this is definitely an issue where the character's faces needed to be as expressive and emotive as possible, and they certainly are. There's a certain combination of melancholy and absolute joy that permeates most of the issue, even the end, and the subtle looks and glances that occupy some of the panels are, rightfully, overshadowed by the large, expressive emotional moments, but that's definitely what's called for.

There's a conflict that feels a bit like it's only there because a superhero book needs an action scene or two, regardless of central themes. It's a problem I've had with a few of these issues, actually, I think most of them didn't need to have any kind of physical fight and they would've been just as good, if not better. A few of the panels are awkwardly blocked and spatial awareness suffers as a result.

This is the send-off that I was really hoping X-Factor would get: some very minor threads are introduced for other creative teams to pick up if they so choose, but nothing is left unresolved with the central characters. This is an absolutely amazing conclusion to what has been a spectacular arc in what has been one of the most legendary runs in comics. To not only be writing the same book for ten years, but to keep a level of consistent quality that Peter David has is nothing short of incredible and it has been an absolute joy to keep up on some of Marvel's most interesting, overlooked B-listers. I have no idea what the future holds for the characters nor the title itself, but whoever it is had better have tremendous feet for the size of the shoes they have to fill. 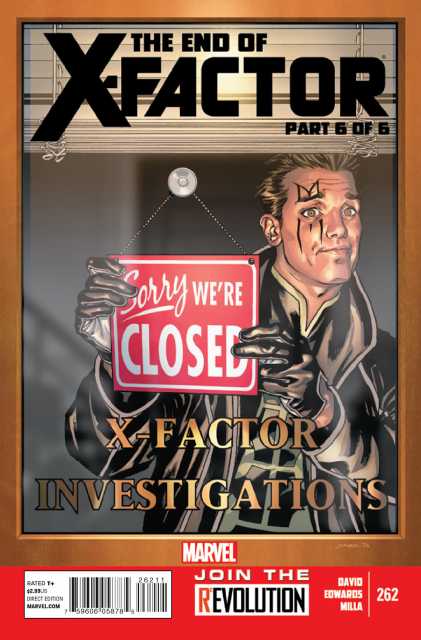