A war between the lords of Hell has begun, and X-Factor is caught in the crossfire AND a moral conundrum.

At long last, I get to review the book that I champion every month on our podcast! If you’re not a regular listener, I’ll say it this way: X-Factor is, in my mind, one of the most underrated books on the shelf. It’s an X-Book, sure, but it tends to be much more character focused, and since those characters work for a private investigation company, rather than a school that holds the future of the entire species within its walls. It’s also, for nearly a decade now, had Peter David as the sole writer at the helm, which has ensured a great continuity of tone, despite the very nebulous artist position.

This issue continues the Hell on Earth (not to ever be confused with the much more labyrinthine H’el on Earth) as Rahne Sinclair’s child Tier still the target of every Lord (and Lady) of Hell due to being the seven billionth person born, and therefore the key to ruling all of the Blighted Realms. The trade-off to this is that he’s also the only mortal that can kill the Rulers on Earth (which doesn’t TRULY kill them, but sends them back to their own realm). This conflicts with his desire for non-violence, and that desire is directly at odds with much of the team. It’s an absolutely fascinating conflict because the question is brought up early and often if it’s morally correct to force the boy into a battle he doesn’t want to be a part of to keep the Rulers of Hell from devastating Earth with their battle (they've declared war on each other with the winner being the one who gets to kill the boy). While that MAY sound cut-and-dry, Peter David does a fantastic job of making it a great deal more murky and morally ambiguous than it might sound, forcing the reader to really think about the different parts of forcing a child into a conflict he neither wants nor is in any way responsible for.

All that probably sounds less than intimate and small-scale, and I agree, it’s not, but somehow David manages to keep everything character-focused and intimate. Old wounds are reopened between Monet and Strong Guy (whose name I just love saying AND typing, and who I always hear as voiced by Brad Garret), Layla Miller is still in absolute turmoil over the fate of her husband, Polaris is simultaneously put-upon and unprepared for her role, Rahne and her son have their backs against the wall, the book NEVER loses sight of the characters.

Meanwhile Leonard Kirk (on pencils), Jay Leisten (on inks) and Matt Milla (on colors) continue to deliver the goods. It’s to the creative team’s credit that on a superhero team made up of mostly “casual” heroes, everyone still has a very distinct look (almost all of whom would pass the test of being identifiable through silhouette alone) and the action remains frantic, but visible and very impactful. The characters’ facial expressions are given special attention with the book almost able to coast without word balloons (which it never does, but it likely COULD) on the power of each panel’s impact and emotion.

I really thought I’d dislike how grandiose the main storyline is, I've even mentioned disliking it before, but Peter David manages to keep it all about the characters this issue, so between that and Kirk’s art, I have no complaints.

X-Factor is at its best when the storyline is appropriately small-stakes to accommodate the fact that the team is more about dynamic and characters than about giant battles and ridiculous power-levels. Unfortunately, the roster has swelled to massive levels over the last couple of years and the storylines have had to swell to meet it, but very fortunately, the characterization has kept up. Even though the team is less about solving mysteries than it is preventing catastrophes these days, we still get so much insight into the massive cast's inner workings, that it still retains that intimate feel. I've felt the last few issues slipping away from that, but this one grounds it firmly again, even as demons, both literal and figurative, are fought and decisions are made that will effect all of Earth. Peter David reminds us, while the decisions themselves are important, how those decisions are reached is the much, much more interesting part. 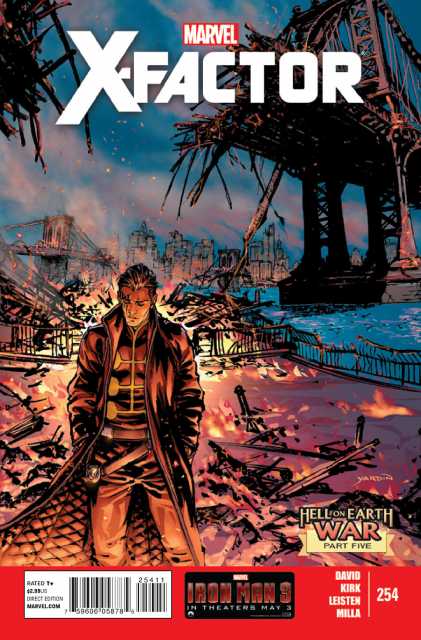