How far will a father go to save his daughter? Will it be enough against the wytches?

This is a series that often feels like a punch to the gut. There are different ways to tell horror stories and Scott Snyder is an expert at making you squirm without creating grotesque or over the top scenes. With this story, the idea is one could seek out these wytches in order to obtain their heart's desire. The price is a matter of 'pledging' someone to the wytches. That means you really have to be on your toes. Following a series of bad events, we've seen the Rooks family move to a new town to try start a new life. The problem is, some of the darkness has followed them. With the Rooks daughter going through things and now at the mercy of the wytches, it's up to her father to rescue her.

Snyder amps up the suspense as we see just how far Charlie Rooks will go for his daughter. As we get closer to the wytches' lair, we find out little facts about them. Seeing Jock's art with Matt Hollingsworth's color adds to the suspense. Turning each page almost becomes an inner struggle as you're hooked on the story but you almost don't want to see what's coming up on the next page.

The color, especially in the darker and creepy scenes, does add a unique vibe to the story but it still feels like a little too much. Some images come across as a little sparkly rather than dark and eerie. It's a little distracting but it's a minor thing.

It's not often a comic book story leaves you with a disturbing sinking feeling in the pit of your stomach. That's what happens with WYTCHES. Scott Snyder and Jock are keeping us on the edge of our seat as we see the events unfold. Horror comics rarely capture the atmosphere needed to properly cause chills but WYTCHES hits you in the right place. You're sucked into the story but you become almost afraid to turn the page. The first arc is almost over and who knows what horror the next issue will bring. 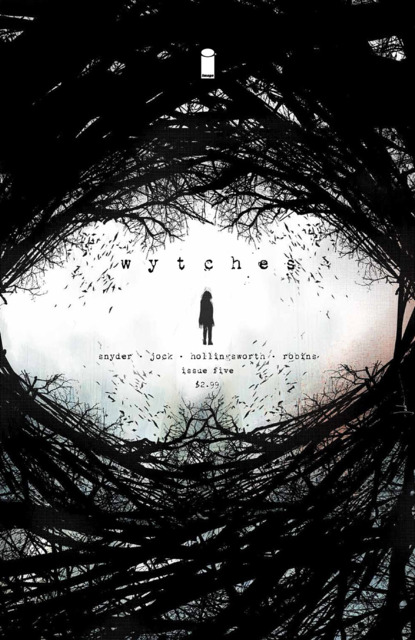