Will the real Michael Holt please stand up?

It's been a while since I have reviewed this series: for a while it had become a bit lackluster, the dialogue had grown (in my opinion) uninteresting and the character interactions had become a bit mundane. There was something about it that simply did not feel a whole heck of a lot like the Power Girl and Huntress that I had enjoyed before, and that saddened me. I decided to give this series another shot to see whether or not it had improved and I was happy to see that these two characters have begun to feel a bit more like themselves. In fact, the interactions between them is what really struck me as particularly interesting.

One of the things that really stood out to me was the fact that Karen and Helena seem to have a good relationship here: they are constantly working together towards a common goal, and it is written in a way that is interesting and unlike what we have seen in these characters before. Although Power Girl isn't exactly portrayed as the 'sharpest tool in the shed,' so to speak, she redeems herself by being portrayed as a more compassionate character. Karen has heart, and even though she may not be all that intelligent, her heart is in the right place. In addition, she does seem a little bit more street smart than she had been, knowing she has to be someplace to get the job done, she does what she has to in order to reach her goal. It is obvious that, based on the events, these two characters have been manipulated and it will be interesting to see not only how they deal with being manipulated, but also how they deal with the deaths that have resulted in the process. Will they mourn the loss of certain characters? This is definitely something that will be interesting to see and it will also determine the quality of this particular issue.

For the most part the art is really very good, which isn't always the case when you have such a large group of artists on a single issue. I was actually pleasantly surprised. The characters are a bit stylized and I think the artists exaggerate a bit because this is Power Girl's series, but overall it is well done. There is plenty of nice details in the characters, even if the backgrounds were a bit plane. The inking is really well done as well and the vibrant colors serve to compliment the issue beautifully.

Michael Holt fans will not be very pleased with the portrayal of Mr. Terrific here, neither will they appreciate the fact that the relationship between he and Karen is treated so poorly.

As I mentioned above, the events that follow this issue will really serve in determining how good it is. If Karen and Helena go about their daily lives without feeling any remorse or compassion for those that they have left behind, well, that will be a big problem. The deaths that occur in this issue have to signify something to both of these characters: they have to recognize their mistakes and they have to mourn. Only then will the story we see here prove to be any good.

As good as the art was in this issue some of the backgrounds (particularly the panels towards the beginning of the issue) were lacking a little bit. There is some discrepancy in where exactly the story is taking place because the backgrounds are simply a series of solid colors, there is no real distinction in terms of what anything is and where the story is supposed to be set. This improves as the issue progresses, but it could definitely have been better in those first few panels.

I have to admit I was pleasantly surprised after reading this issue: there are plenty of good things about it that I was not really expecting. First, you have some relatively good art here, in general. The characters have a lot of detail (even though the backgrounds could be more detailed) and the colors really compliment the art overall.

There is a real sense of teamwork here in this comic and I love the way the relationship between Karen and Helena is portrayed here. The writer manages to capture some very interesting moments in this issue via some solid dialogue between the two characters which is really nice. I was happy to see that these two characters are essentially portrayed relatively well. I also thought the story was pretty good and the dynamic between the heroines in this title and the adversary is a pretty interesting one, particularly if you are someone who has been following the story carefully from the very beginning.

Overall, this was actually a pretty good issue. It presents some solid character interaction, pretty and stylized art, and a story hat leaves readers excited to see what will happen next. It builds off a story that we have been seeing all along, but manages to also be accessible to new readers.

Still dont get the love for PG's old suit, it's fair if you are between 12 and 17, but outside of that age group... whats to like?

You are giving the series a lot of benefit of the doubt in this review which is only fair if you haven't been reading it, but as somebody who has been reading it, I can tell you it is not deserved. (laughs) One of the main things you mention as a positive is that Huntress and Power Girl really seem to be working together, and thought that is somewhat true in this issue, it has not been true in the past twelve issues. The typical course of events is that Huntress gets in over her head and Power Girl rescues her at the last minute, and actually, that happens twice in this issue, but at least in the first conflict, the girls were fighting Desaad together, so that counts for something.

I actually made a prediction on how this issue would go on Tuesday, and it was about 80% because this series is so predictable.

I'm more than ready for this entire series to be canceled.

I've never been a Power Girl fan, but even I felt a little bit more at home with the character seeing her don her classic, if ridiculous, costume.

Now if we could just get a writer to write her with, you know, care and respect.

This book is simply terrible.

@babs Glad to have you back Sara! I didnt read this book, never do lol but nice review.

I will be picking this issue up just to support the switch in PG's costume. However (and yes I'm nit picking) I DO prefer the red sagging belt over the classic blue one.

I continue to enjoy this series.

Michael Holt fans will not be very pleased with the portrayal of Mr. Terrific here, neither will they appreciate the fact that the relationship between he and Karen is treated so poorly.

... why wouldnt they? Michael Holt wasnt in the entire issue . it was always Dessad

Will they mourn the loss of certain characters? This is definitely something that will be interesting to see and it will also determine the quality of this particular issue.

what was the name of that character again?

While this is not the best book ever I have enjoyed this series. I am a big fan of the Helena Wayne Huntress and I love Power Girl so I might be a bit biased.

What's that? Power Girl's old costume is back?!

I haven't checked this issue yet, but #11 was good. That cover of pg kissing holt but through the cammera lens was really desaad blew me away. I thought it was funny the line holt used when he saw karen, 'I'm so exited to see you.' I don't laugh at sex jokes but that one was good ( if it was even a sex joke). Also I didn't like, but found it interesting, the way helena threated that guy who was trying to talk to her. That is the first time we have seen her interact eith another person other than pg and that is the way she behaves.

I llook forward to this issue, but I seriously hope this pg costume isn't permanent. The ehole dc universe moved on to better but she retrogrades. And I blame dc for once again caving in to stupid fanboys crying.

I really want to love this book, because I was a big Power Girl and Huntress fan in the pre-Flashpoint universe, so I thought this was a nice push in the right direction.

Karen needs an event, and maybe we get that in this issue, that takes her head out of the clouds and makes her be a little more intelligent and thoughtful. She was a lot better in her appearance in Supergirl, so I'm hoping it's a trend.

I'd really like to see Helena explore more of her Batman-related origins, because her run-in with Damian and then loss of him was the best she's been so far.

I've been on and off with this series from the beginning. The art has been all over the place for one thing. Powergirl has been characterized as something of a dolt. Huntress has all manner of "issues" with the Bat-family. And then there's this feeling that PG and Hel live in this bubble inside the DCU. They feel completely cut off from the rest of the DCU more-so than any other DC title.

It's bad when PG is drawn and written better in Supergirl's book than in her own. 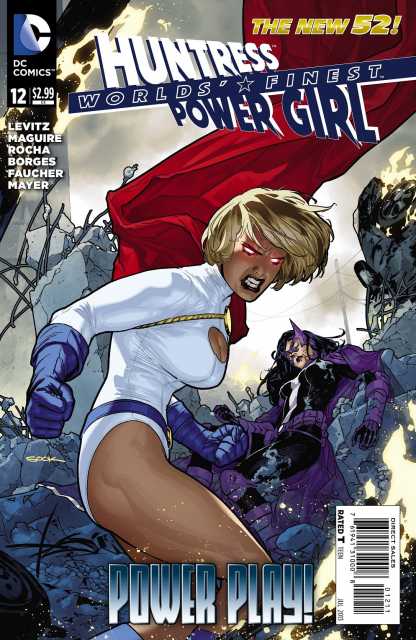