Wonder Woman #32 - The Beast of Times

This whole latter part of this series is all about the build up for the fight between Wonder Woman and First Born. It's a slow process building on strategy and building armies. The book does moves slow, but in a very different way. Azzarello explores relationships between characters and betrayal, which all lead to this eventual fight.

This issue is incredibly exciting, although it's not action packed. Azzarello does not only a fine job with the overall story, but also with the dialogue. In the opening of the book, there's a fantastic scene between Eris and First Born, and Eris' dialogue fits her character because she's the goddess of chaos. He really nails it here.

This book and story has an incredibly brilliant flow. Everything moves seemlessly from moment to moment. Azzarello, Sudzuka, and Chiang (who did breakdowns) have one of the most consistently fantastic books on the shelves at the moment. The quality of their work is always top caliber and more than anything else, this book is simply a delight to read from a story and visual standpoint.

The ending to this issue is utterly fantastic and calls back to some earlier events in this series. This book is in its own little world, which is what makes it so strong, and it spends time drawing from the Wonder Woman mythos as well from previous issues in this volume. The book is continuing to build to war, and I couldn't be more excited.

The art is stunning in this issue. Goran Sudzuka, along with Matthew Wilson on colors, create a full, visually stunning piece that will captivate the reader. At no point does the art take shortcuts to finish a panel or a page. It all fully realized and there are certain scenes, like the one where Wonder Woman stands in front of a fire, where Wilson's color work really stands out.

Azzarello's, Chiang's, and Sudzuka's time on this book is coming to a close soon. I'm not sure of exactly when, but I do know it's down the pipeline.

WONDER WOMAN continues to be the stand-out of the New 52 that does not get the credit it is due. This is a phenomenal series that only gets better with each passing issue. The battle between Wonder Woman and First Born is coming to a head, and she's going to need all the help she can get. The creative team really makes a huge impact here and the ending isn't shocking but it will lead to some seriously cool moments in the next issue. Overall, I highly recommend this issue. 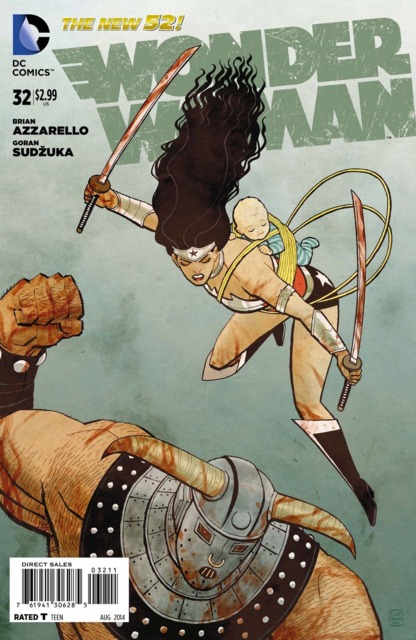