Wonder Woman and Cheetah are on the run.

Cheetah leads Wonder Woman to help Diana find her way back to Themyscira. However, something is after both of them.

Without a doubt, Greg Rucka is overall crafting a pretty wonderful Wonder Woman series. Sure, it's insanely early to say that but between the Cheetah and "origin" story, the first three issues have been a fantastic read. This issue moves relatively slow, but the pacing does wonders for building on the world and introducing/enhancing the characters. We're getting a lot from Wonder Woman and Cheetah, as well as some developments from Steve Trevor. It feels like a very stacked book and the pacing makes it feel like we're getting a lot more bang for our buck.

The art really shines in this issue. Artist Liam Sharp and colorist Laura Martin breathe life into this story. Sharp hits some great emotional moments, and does a wonderful conveying it through the character's faces. In addition, he does some awesome work with the background, which fills each scene and brings the viewer into the world.

However, we can't forget about Martin's colors here, which are the lifeblood of the issue. Her shading is brilliant. She picks some fantastic color palettes for a few scenes, which really enhances to mood and tone for each of those stories.

What's really cool about the issue is we're seeing a more caring side of Wonder Woman. While she's totally a butt-kicking superhero, Diana is still capable of empathy, even towards someone who she once considered an enemy. This story is giving readers another side to the character.

The problem with the book is the same problem with the last two issues, and that's the fact that the odd issues feature the Cheetah stories, while the even ones feature Wonder Woman's "origin" story. While it's great to have this series come out every two weeks, it's a bummer that it's switching between two stories. It breaks the overall flow up.

It's nice to have a Wonder Woman story that you're really excited to read, every two weeks. While part of the problem with the overall volume is that each issue switches between stories, that's the biggest and only real worry thus far. The issue did move a tad slow, but in the grand scheme of things, the slower pacing lends itself to enhance the world and the story. It read great as a single issue and will read even better in trade. This is one of the Rebirth series you need to read. 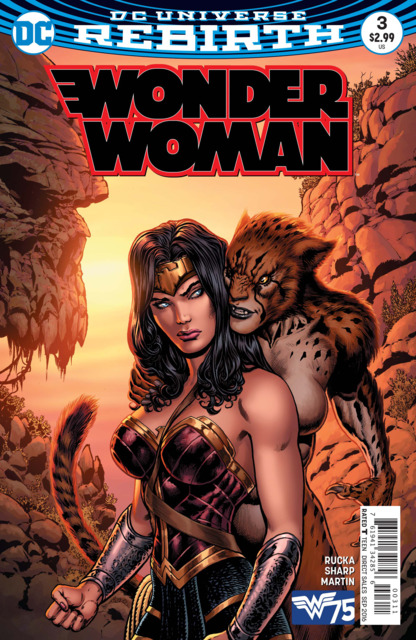