Who can Wonder Woman really trust and why has the First Born returned?

If you've been waiting to see Wonder Woman unleash her powers once again, well, you are in luck as she does exactly that in this issue. Excitement is at the core of this story from the very start, launching Diana into a frenzied battle with a character that we have definitely seen before and has strong ties to Wonder Woman and her history. I have to admit, the discover of this character's identity was really shocking.

If you have been waiting to see Diana fly then you will be quite pleased with this issue. One of the great things about this scene is that it doesn't come out of nowhere -- she uses her power of flight for a reason, almost as if it is something she will do only if it is absolutely necessary.

If I had to sum up this issue in one word it would have to be action-packed from start to finish. What is truly remarkable is the fact that Diana is actually holding back in battle and rather than unleashing her own power, she uses the powers of her adversaries against them. It's a great portrayal not only of her abilities as a fighter and warrior, but also as a strategist. Clearly, Wonder Woman is no dummy and we see that explained here very clearly.

Once again, this issue deals with trust; a recurring theme we have seen at the very core of Diana's story since the launch of her series. She is trusting, compassionate, and it will be interesting to see whether that trust and faith in her friends is something that will come back to hurt her in the end.

This issue isn't only about Diana and her big fight, however: it's about the upcoming adversaries as well as characters like Lennox. It is here that we get a glimpse at Lennox's past and the decisions he made before. There are some great moments of dialogue here as well which I personally felt helped balance the issue. This is also where we get our very first introduction to the First Born, giving us a better idea of who he is, where he has come from and why he has made his return after all this time.

This is by far one of the best issues of WONDER WOMAN I have read since the launch of her series.

I was really impressed with the story in this comic. Not only was it a great example of Wonder Woman's abilities as a warrior (the fight with Moon was pretty fantastic), but it's great to see the action balanced by humor and a story that keeps readers guessing at every turn. Just when you think you know who Diana can trust and what is really going on, and who these characters are, Azzarello throws us a curve-ball that spirals our theories out of the water. The result is a comic that is entertaining because it is well written and unpredictable.

Sometimes when a comic has more than one penciller on an issue it can pull the reader out of the story. This particular issue featured the panel breakdowns by Cliff Chiang and half the comic penciled by Chiang while the other portion was drawn by Goran Sudzuka. Fortunately Sudzuka manages to illustrate the characters and scenes similarly enough to Chiang. In fact, the style is so similar and so impressive that it's hard to believe this issue wasn't drawn entirely by the same artist. Not once did I feel as though I was pulled out of the story, which is fantastic. The colors compliment Chiang and Sudzuka's art and work well with the overall tone of the story.

The dialogue and action in this comic are fantastic, the revelations, twists and turns are just awesome. As far as being a good jumping on point for new readers, I hesitate to say that it isn't really. If I were just picking up this series I think I would go back and read at least the previous issue to get a better understanding of what is really going on. Then again, if the story seems like it would pique your interest you may just want to dive right in -- chances are you won't be disappointed.

This is one of the series I continue to be the most excited about each month, and after reading this issue, I absolutely cannot wait to read WONDER WOMAN #21. 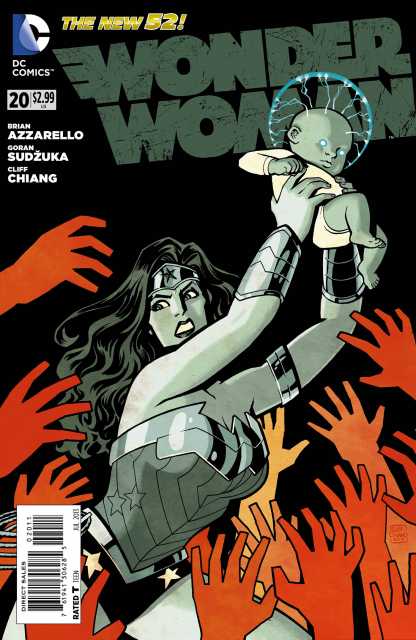